Hm. Sure seems like there are a lot of mistakes being done with the people handling our health care.

“The world junior hockey championship is expected to bring thousands of visitors and about $80 million to the province, but there are hopes that the international attention will have long-term economic benefits.”

“GoDaddy, the domain register targeted by online activists in response to its enthusiasm for a pair of Hollywood-backed copyright bills, has finally denounced the legislation in response to a boycott scheduled for today. Warren Adelman, the company’s chief executive, said today that “GoDaddy opposes SOPA,” meaning the Stop Online Piracy Act, which is facing a House of Representatives committee vote next month.”

Stupid of GoDaddy to support it in the first place. Good thing I’m with Hostmonster! ;)

“Developers have done the best that they can with the medium, crafting virtual analog sticks and swipe gestures for camera panning. Yet it still doesn’t compare to the tried-and-true experience of using a physical controller. A company called 60beat is trying to change that with a new controller that is compatible with iOS devices.”

“Through his photos and articles, Finbarr O’Reilly told my story and the stories of my Marines. By doing so, he helped me find my door. For this, I will forever be grateful.”

“CNN announced some details on its two upcoming morning news shows, which we learn will be called Early Start and Starting Point.”

“HMV Canada is hoping a new online streaming subscription service will help the venerable music retailer recover from a year marred by store closures and the ongoing decrease in physical music sales.”

Interesting. I’m actually surprised HMV is still chugging along, lol. Good for them.

Just become buff naturally, people. Like me! Just kidding, lol. (I wish I was buff!)

“Obese older adults may be more likely than their thinner peers to suffer a potentially disabling fall — though the most severely overweight may be somewhat protected from injury.”

Lol wow. There is a study for everything – and a funny headline to go with it.

“The debris field from this Japanese tragedy is the size of the state of California… the worst-case scenario could mean large boats and unmanageable clots of trash ramming into sensitive areas such as coral reefs or blocking navigation routes into Hawaii and along the U.S. West Coast.”

Crazy that it’s just been travelling all this time.

“Space junkies were treated to a marquee year in 2011, thanks in part to powerful new telescopes that let astronomers peer into previously unseen parts of the universe. From potentially habitable new worlds to a crystallized planet that may very well be one gigantic diamond, a roundup of the year’s most exciting intergalactic discoveries…”

Very exciting year!! The universe is so fascinating :)

“Afraid the world’s going to end in 2012? It’s safe to stop stockpiling those non-perishables and practising the Hail Mary, say local psychics.”

“”If Germans were the tallest people in the world, how would you prove it?” That was the head-scratcher asked during a job interview for a product marketing post at Hewlett-Packard.”

So strange and HARD!! I really haven’t had any odd questions asked during interviews I’ve experienced.

It’s the age of the Internet Mommies!

“There were plenty of promising technologies and new services in 2011 that failed to catch on with customers or were undermined by strategic mistakes. Here’s a look at three…”

Must suck to be on the “flop” side of the year-in-review articles.

“A rare white Christmas at the South Pole brought with it a record-breaking heat wave — at least for a day. The temperature officially hit 9.9 degrees Fahrenheit (minus 12.3 degrees Celsius) about 3:50 p.m. on Dec. 25.”

Unusual weather is a sign of the end of the world – just saying! lol.

“Did you know an octopus has three hearts, and can squeeze through a hole the size of a dime? Or that an armadillo always gives birth to identical quadruplets?”

Love this kind of information :)

“It didn’t work out so well for their characters in “500 Days of Summer,” but Joseph Gordon-Levitt and Zooey Deschanel have gotten together to make the world’s collective heart melt once again.”

“Filling up your new iPhone? Just hoping to make the one you already have even better? These are the apps you don’t want to be without.”

Are these apps on your iPhone yet? (They’re on mine! For the most part).

“Norwegian state television displayed an unusual eye test chart during a serious news item about eye care for the elderly causing viewers to ROFL and LOL… the rather staid combination of E, A and Os, the chart that was shown was made up of text and internet type abbreviations such as OMG and STFU.”

“A midwife has put her professional skills to the test by delivering her own baby daughter… using a hand-held mirror.”

“As part of her experiment, Hesketh left the burger unwrapped unrefrigerated on her counter. One year later, the burger remained unchanged and ‘still smells slightly like a burger.’ The only thing that has slightly changed is the burger bun turning stale. Other than that, there has been no trace of bacteria, maggots or mold. ”Obviously it makes me wonder why we choose to eat food like this when even bacteria won’t eat it'”

“What do hamburger-eating cats, video game squabbles and an unwanted carpet roll have in common? Chatham-Kent police can’t quite believe it, but people in their southwestern Ontario area apparently thought these were all situations requiring an emergency response.” 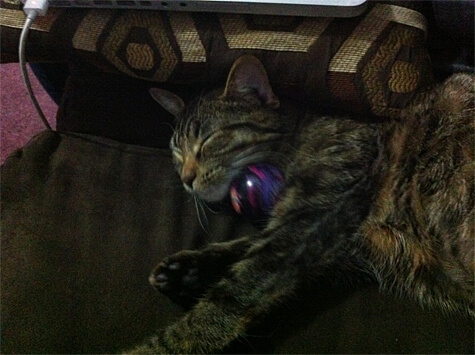 Thor and her new ball!

Linda Hoang is a Canadian blogger based in Edmonton, Alberta, who writes about travel, food lifestyle and pet topics. She's also a seasoned social media/digital strategist with a journalism background. Linda loves exploring the world with her husband Mike, eating their way through cities, supporting local businesses, and photographing Instagrammable Walls. She is the founder of the Edmonton International Cat Festival and a fur-mom to two cats and two dogs.
PrevPreviousClicks of the Day: Wednesday, December 28, 2011 Edition!
NextClicks of the Day: Tuesday, January 3, 2012 Edition!Next