“So before you pick up that infographic, give it a good, hard look. Is it from a site with no real reason to be publishing it? Do some quick mental math checks make the “data” look pretty unlikely? Have the sources been made deliberately hard to check? If so, take your hand off the mouse before you post it to facebook, your blog, or your favorite email list. Remember: only you can prevent viral media from spreading.”

“Canadians put aside their worries about the global economy and their rising debt loads in favour of getting a great deal in the traditional Boxing Day spending spree. Bargain hunters lined up across the country on Monday, in some cases overnight, looking for deals on everything from high-end clothing and leather bags to televisions and video-game consoles.”

I experienced the craziness of early morning Boxing Day shopping for the first time this year. Mike’s family gets ready and heads out to the stores before the sun is up. I thought it was crazy and then I saw just how many other people do the very same thing. Oh, human beings. Only us.

“In a Christmas season marked by growing economic malaise around the world, Canadians are defiantly fighting back with the best weapon they have: their credit cards.”

Which is not going to be good now in January when the holiday bills are due. Mike and I did pretty good – emerging from Christmas debt-free though we did have to dip into some savings to pay off some purchases.

“Sears Holdings Corp. announced Tuesday it plans to close between 100 and 120 Sears and Kmart stores due to poor sales. A list of stores affected will be available at searsmedia.com once the retailer decides on the locations, but… no Canadian locations will be closed.”

“For 11 days since Kim’s death was announced, hundreds of thousands of North Koreans have made around-the-clock visits in freezing temperatures to bow and lay flowers at massive portraits of the late leader in a theatrical show of grief similar to the one for his father in 1994.”

I don’t think I would ever want to visit or sob for such a leader.

“Here’s a look at the past year in which Julie Matthews helped return more than $70,000 to consumers.”

A look back at some of the people Superhero Julie Matthews helped this year! :)

“The mystery ball left a 13ft wide crater and locals claimed to have heard several explosions before the discovery… The discovery, made in November, but not made public until now, has prompted speculation over whether the mystery sphere is evidence of extra-terrestrial life.”

Crazy!! And similiar balls have been found all over the world… the aliens are preparing. Lol. #ImNotReallyKidding

“Didn’t quite accomplish all your fitness goals in 2011? I feel your pain, because neither did I. Sigh. Of course, there’s always 2012. But if the doomsday prophets are right, there won’t be a 2013. So let’s get ‘er done this coming year!”

“Along with odd bits and street food, the nostalgic dessert is expected to make a culinary comeback in 2012.”

I feel like red velvet has already come back, lol.

It can get very expensive but if Thor was in some kind of pain that needed surgery or medicine we would pay for it. Anything to keep our pet (who is a part of our family for sure) healthy. <3

“Scientists are linking obesity with inflammation and scarring in the key brain area that controls body weight — a finding that could explain why it’s so hard to lose weight and keep it off.”

“The Recording Academy said on Wednesday it is giving the co-founder of Apple a special “Trustees Award” Grammy… ‘As former CEO and co-founder of Apple, Steve Jobs helped create products and technology that transformed the way we consume music, TV, movies, and books'”

Sounds odd when you just read the headline but makes sense when they explain it, lol.

Wow these are amazing and so creative!!!

“Google has thrilled us with some excellent Doodles this year, and it’s ending the year on a high by revealing 2011′s festive design, decked out in Christmas lights. To celebrate Google style, let’s take a look back at all the holiday Doodles since the very first simple snowman design in 1999.”

Google’s Doodles are so wonderful. 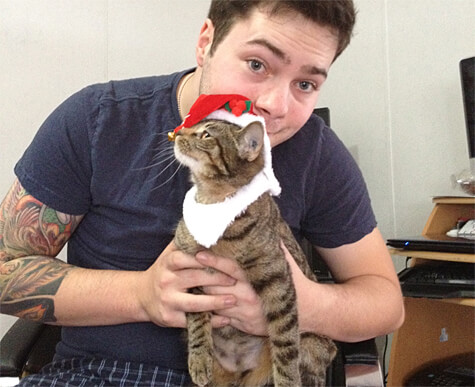 Linda Hoang is a Canadian blogger based in Edmonton, Alberta, who writes about travel, food, lifestyle and pet topics. She's also a seasoned social media/digital strategist with a journalism background, the founder of the Edmonton International Cat Festival and co-founder of Stop Race Based Hate, an online anti-racism education tool. Linda loves exploring the world with her partner Mike, eating their way through cities, supporting local businesses, and photographing Instagrammable Walls. Linda is a fur-mom to two cats and two dogs.
PrevPreviousReview: Cibo Bistro
NextClicks of the Day: Wednesday, December 28, 2011 Edition!Next