“December is a tight time of year for almost anybody’s wallet, but a new survey says women and young Canadians are feeling the financial strain the most.”

Lol. This is very accurate as I am both a young Canadian, a woman and always worried about finances, lol.

“The first-degree murder trial of Mark Twitchell unfolded like the reading of a screenplay — every day a new witness testified to the almost unbelievable events surrounding the death of Johnny Altinger, a quiet oilfield industry worker who was looking for a date on the Internet but was lured to his death by an aspiring filmmaker who recorded his actions in a bravado-filled diary.”

It was/is an insane story.

“John Yerxa, the founder of Edmonton’s only independent commercial FM outlet, Hot 107, is selling the Top 40 station to Harvard Broadcasting partly due to health concerns.”

“Want to vacation like a scientific explorer would? We’ve put together the ultimate travel guide for people who want to journey back to the earliest ages of the Earth. This guide to North American prehistory will take you to valleys full of fossils, mountains carved by ice ages, and petrified forests that are millions of years old.”

“Glad they don’t do lobotomies anymore? Weirded out by the idea of giving kids cough syrup made with heroin? These medical practices, which were common in the twentieth century, scare the hell out of us now. Which of our current medical procedures will humanity look back on and deem horrifying?”

“The Oculus Telepresence Robot kit puts a periscope on top of your computer and four wheels underneath, and you can pilot the thing with an Android phone, an iPad, an iPhone, an iPod Touch, or anything with a Web browser.”

“The North American Aerospace Defense Command is using radar, satellites, cameras and fighter jets to track a target that appears on the loose annually – Santa Claus. Saint Nick’s worldwide journey is being tracked at noradsanta.org, a tradition the U.S.-Canada command centre has kept for 55 years and counting.”

Technology can take us so far :)

“Hong Kong health authorities have slaughtered more than 17,000 chickens after three birds were found to have died from the H5N1 bird flu strain in the past week. The city is on high alert having raised its flu warning system level to ‘serious’ after a chicken carcass found at a bustling market tested positive for the virus.”

Ridiculous. This is how the Earth will end. Note the flu timeline at the bottom of the article includes the recent “Dutch scientists create super-strain of the disease, dubbed the ‘Armageddon virus’ which can easily be spread through the air.”

“A Navy tradition caught up with the repeal of the US military’s “don’t ask, don’t tell” rule on Wednesday when two women sailors became the first to share the coveted “first kiss” on the pier after one of them returned from 80 days at sea.”

“People who text message are prone to becoming digital-age Pinocchios because the target of their fibs isn’t present to witness their noses grow.That’s the newly-released finding of a University of British Columbia study that examined how technology impacts moral behaviour.”

“Depression trumps divorce on the list of things likely to cost you Facebook friends, with a surprising new survey showing downer posts are among the top reasons people are “unfriended” on the social website — ranking even higher than marital or relationship breakups.”

I try to stay fairly positive with my Facebook updates – unless a deadly bird flu is threatening to wipe out our species, lol.

“Layton’s amazing year of triumph and tragedy is why he is a clear choice as Newsmaker of the Year for 2011, as voted on by QMI Agency newsrooms across the country.”

“The Vatican said on Wednesday an unknown buyer had snapped up the internet address vatican.xxx, a domain combining its name with an extension reserved for pornographic content.”

“Mother only found about her baby’s abnormalities minutes before birth. This is the second registered case of a two-headed baby being born in Brazil this year.”

Bizarre… Hope this ends up okay.

“Some are foreign words. Others come from medical dictionaries. And there’s a surprising amount of hobo slang. Have fun working these into conversation this holiday season!”

Lol. Using one of these words would be a conversation stopper I’m sure! Very weird words!

“KTLA morning news weatherman Henry DiCarlo has himself a little temper-tantrum when his weather report is cut short, and his news colleagues are right there to make fun of him afterwards.”

Lol wow. Very unprofessional – but at the same time very badly produced. Give the guy some time!

“The game’s theme song, a catchy march with more than a bit of Eastern European flavor, is as malleable and distinctive as Angry Birds’ game play… One of the most elaborate but respectful interpretations to date has been that of the London Philharmonic Orchestra, conducted by Andrew Skeet, included on the ensemble’s new album The Greatest Video Game Music.”

“JibJab takes us on a musical ride through the crazy year of 2011. From politics to entertainment and everything in between.”

So many things I forgot happened this year! Haha great reminder!!

Lol so awesome. They are better than I am. I wish I could shuffle!!! 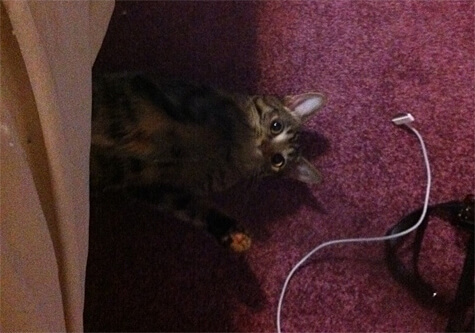 Peeping out from under the bed, lol.

Linda Hoang is a Canadian blogger based in Edmonton, Alberta, who writes about travel, food, lifestyle and pet topics. She's also a seasoned social media/digital strategist with a journalism background, the founder of the Edmonton International Cat Festival and co-founder of Stop Race Based Hate, an online anti-racism education tool. Linda loves exploring the world with her partner Mike, eating their way through cities, supporting local businesses, and photographing Instagrammable Walls. Linda is a fur-mom to two cats and two dogs.
PrevPreviousClicks of the Day: Tuesday, December 20, 2011 Edition!
NextClicks of the Day: Thursday, December 22, 2011 Edition!Next