“As the province prepares to enforce its tougher impaired driving legislation, many are wondering how much will be too much once the new law kicks in next year… to give people an idea of how many drinks could put them over 0.05, Global News conducted a little test – and you may be surprised by the results.”

Great report! Nice to get a picture painted on just how much it may take to go over the new limit now. Call the cab or have a designated driver everyone!

“Canadians will soon be able to use NEXUS cards which are accepted as proof of identity for frequent travellers at Canadian and U.S. border crossings… Also, the new program will eliminate duplicate baggage screening over the next three years, meaning that passengers flying from Canadian airports with U.S. pre-clearance facilities will no longer have their bags screened again at the connecting U.S airport.”

“The Federal Court has ordered the government to pay $200,000 each to former Liberal prime minister Jean Chretien and his late chief of staff — compensation for some of the legal costs they racked up fighting the findings of an inquiry into the sponsorship scandal.”

“Former Tory cabinet minister Helena Guergis has launched a $1.3 million lawsuit against the prime minister, two MPs and the Conservative Party of Canada. Guergis is seeking $800,000 in general damages, $250,000 in aggravated damages and $250,000 in punitive damages for what she alleges is a conspiracy, defamation, and negligence when she was kicked out of the Conservative caucus.”

“The province and owners of the GuZoo near Three Hills have reached a deal to allow the zoo to reopen.”

Not sure how I feel about this – although I guess if the rules ensure the animals are well-cared for… though I feel they shouldn’t be caged up in a sad, small zoo anyway. :(

“While the holidays have always been a time to be with those you love, experts say they’ve also become the time to ditch the one you don’t. Young lovebirds and old marrieds alike are more likely to pull the plug on their relationship in the stretch between late November and early January, experts say.”

“Gilbert Brule might never be an NHL star, but he’s a legend among U2 fans. Back in May, when he was still an Oiler, the forward and his girlfriend were driving in West Vancouver when they picked up a pair of hitchhikers seeking shelter from the rain. A day later, one of those hitchhikers recounted the story in front of 65,000 fans at Commonwealth Stadium. “I’m ever so grateful,” said Bono, who fronts the biggest band in the world. “I’ve decided that I want to be Gilbert Brule.””

What were the chances, really, lol. Crazy story.

“Generations from now, grizzled old Edmontonians might sit their great-grandchildren down and regale them with stories about the wild weather of 2011. It tested the endurance of the heartiest citizens. January alone had six months worth of snow — 64 centimetres — forcing the city to move mountains while marooning cars under windrows. All told, the 2010-2011 winter season saw thermometers dip below the -20 C mark 63 times, 50 per cent more than usual.”

I feel this winter we are being rewarded for the ridiculousness we experienced at the beginning of the year, lol.

“Parents fretting over what their kids will find under the tree Sunday can take heart: any toy is good as long as mom and dad play, too. There aren’t really any bad toys or bad kinds of play… While educational toys are a good idea, young children receive the most benefit when their parents play with them and engage them.”

“A KPMG study released on Wednesday found only 23% of consumers were willing to use their mobile phone in place of other forms of payment, with 30% of younger adults much more willing to do so. And that means that all those hopes of retailers becoming more efficient at checkout and banks finding another revenue stream won’t be a reality soon.”

Yeah I don’t see myself ditching the wallet anytime soon.

“Once a year I allow myself to go beyond the likely, beyond the possible and deep into the world of the implausible. What follows are my most ridiculous and unlikely predictions.”

Including “SOPA becomes the law of the land” (I sure hope not), “Google+ Takes Centre Stage” (lol not likely), Honda’s Asimo robot released to consumers (the beginning of iRobot, lol) and more.

“Major Internet companies have formed a united front in their opposition to the Protect IP Act and the Stop Online Piracy Act. Well, almost. One exception has been the domain registrar GoDaddy. In a op-ed published in Politico shortly after SOPA was introduced in the House, GoDaddy applauded the bill and called opponents “myopic.” Now furious Internet users at reddit (owned by Advance Publications, which also owns Condé Nast) have organized a boycott of the registrar.”

“More than a quarter of photos and videos shot by individuals in the U.S. are now being captured by smartphones, according to an online survey of 3,300 Internet users ages 13 and up. Sales data suggest smartphones are replacing consumers’ need for low-end point-and-shoot cameras and camcorders.”

This woud be me. I would still like to bring my point-and-shoot digital camera with me to events though because I still don’t think phone camera flash is quite the same as digital camera flash, but I actually lost my battery charger for the camera so that’s why all of my pictures in the last few months have just been from my phone! Mike’s new iPhone 4S camera image quality looks great but I find mine isn’t the best.

“There’s a lot of discussion these days about the viability of 3D and what the future holds for it. Is it a gimmick? A trend? Or is it the next great frontier in movie making? As someone in the business of 3D, I’d like to share some thoughts on why I think it’s here to stay, and in a big way.”

“Dated to 7500 BC, the obsidian bracelet studied by the researchers is unique. It is the earliest evidence of obsidian working, which only reached its peak in the seventh and sixth millennia BC with the production of all kinds of ornamental objects, including mirrors and vessels. It has a complex shape and a remarkable central annular ridge, and is 10 cm in diameter and 3.3 cm wide.”

“Feeling housebound by Facebook addiction? Facebook just released “Suggested Events,” which uses your own check-in information to point out events you might want to go to in the real world.”

If it’s just based on check-ins, I won’t be getting any suggested events because I don’t use the check-in feature on Facebook. But lol, interesting.

“They’ll be nothing X-rated online about Saskatoon for at least 10 years. Officials in the Saskatchewan city secured the website saskatoon.xxx earlier this year before it went up for sale to the general public.”

Fantastic! Love when shows have a devoted group of fans willing to do stuff like that.

“Attention lonely Internet lurkers, there are girls out there who totally “get” our internet humor and still love us! Like Audrey, the lovely girl in this video who was proposed to by her boyfriend Tim with internet memes. Watch the video, it’s so gosh darn cute. It’s a little Love Actually sprinkled with perfect beats and pauses of classic Internet memes (complete with the requisite cat). Tim got his friends to document the whole proposal as he flipped placards to show Audrey his true intentions. Don’t worry, she said yes but he even came prepared with a “if she says no” poster.”

This is the most amazing thing I’ve ever seen! I laughed and cried watching this, lol. Not ashamed to admit it!

“Manila-based Cebu Pacific airline gained fame by dancing through their safety routine to the backing of Lady Gaga, but this time have updated it for the festive holiday period. The Philippine airline says the choreographed dance helps passengers pay more attention to the demonstration, which instructs passengers of how to use their seat belts and life jackets.”

“They might appear an odd choice of friends but it seems the friendship between Tabitha the piglet and Susie the boxer dog has made them an internet hit.” 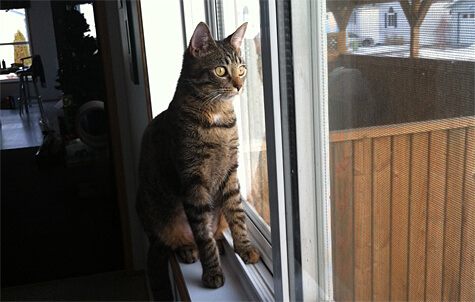 What are you looking at Thor?

Linda Hoang is a Canadian blogger based in Edmonton, Alberta, who writes about travel, food lifestyle and pet topics. She's also a seasoned social media/digital strategist with a journalism background. Linda loves exploring the world with her husband Mike, eating their way through cities, supporting local businesses, and photographing Instagrammable Walls. She is the founder of the Edmonton International Cat Festival and a fur-mom to two cats and two dogs.
PrevPreviousClicks of the Day: Wednesday, December 21, 2011 Edition!
NextMy Wedding Blog!!!!Next