“Memorize this list and slow down if you want to avoid that sickening flash in the rear-view mirror. The City of Edmonton released a top 10 list of photo radar spots Monday. Police have handed out more than 113,700 tickets this year.”

I always see the #3 radar spot (Stony Plain Road eastbound at 133rd Street — 5,607 tickets). There’s a ton of Anthony Henday/Stony Plain Rd. ones actually I’m surprised I haven’t been dinged on one of those yet…

“Many Canadian couples take more away from the holidays than happy memories, data shows. Birth records from four provinces shows an apparent peak in conceptions in the last three weeks of December. The December pattern corresponds to a peak in births in mid-to-late September, a pattern seen consistently in British Columbia, Alberta, Ontario and Nova Scotia over multiple years.”

Haha! This is funny.

“Too much wiggling can be hazardous to your health. Just ask Skyblu, one of LMFAO’s two rappers/dancers/DJs/producers. The Party Rock Anthem duo is postponing Wednesday’s show at Rexall Place — and two others in western Canada — due to three herniated discs in Skyblu’s back, incurred from LMFAO’s Sexy and I Know It wiggle dance.”

LOL. Love the lead. Who knew wiggling was that dangerous?! Sucks for everyone who was excited about tomorrow night’s show but it’s apparently going to be postponed to February so at least it’s postponed and not completely cancelled.

Lol, RIM makes it onto the Loser list (as expected). Netflix also loses. Apple, Google, Amazon among the winners.

“U.S. District Judge Lucy Koh has ruled that a lawsuit over Facebook’s “sponsored story” advertisements can move forward, denying Facebook’s request to have the lawsuit dismissed. The suit claims that the practice violates California’s Right of Publicity Statute, which prevents the use of a person’s photo or name in a paid advertisement without explicit consent. Facebook’s “sponsored stories” began appearing at the beginning of 2011. Facebook assembles the ads using the “likes” of a Facebook user’s friends, then crafts an advertisement — often using that friend’s name and photo — for the Facebook user, usually touting that their friend “likes” a particular advertiser. Facebook builds the ads when a Facebook member clicks a “like” button for a particular company, product, or other item.”

Including “when share your link, give it a catchy headline and brief description” and “ask your friends to spark a conversation.”

Plus other good tips for journos.

“As I ponder the future of The New York Times, it occurred to me that its pay meter could be exactly reversed… Imagine that you pay to get access to The Times. But whenever you add value to The Times, you earn a credit that delays the next bill. See ads, you get a credit. You click, more credit. Come back often and read many pages, more credi. Answer a reporter’s question on Twitter and the reporter uses your information: credit.”

“Starting with the virus that causes bird flu, 2 scientists create a highly contagious version in the lab that one calls ‘probably one of the most dangerous viruses you can make.’ A government committee is now deciding how much detail scientific journals should reveal.”

I had meant to post this a few days ago – but seriously. How is it that more people/more news orgs./etc. aren’t talking about this? Why are scientists so stupid? Why are we creating viruses that can wipe us out? Meddlers. Idiots!! It took a few days since the NBC report but today there was a New York Times article on it as well:

“For the first time ever, a government advisory board is asking scientific journals not to publish details of certain biomedical experiments, for fear that the information could be used by terrorists to create deadly viruses and touch off epidemics.”

Once again, I don’t know why they even created this. So dumb.

“Forget Siri. According to IBM, in five years computers will be able to do a lot more than listen to your voice: They’ll be able to read your mind.”

“With less than a week until Christmas, shoppers’ emotions are running high. But a new biometric study suggests the holiday crunch isn’t as stressful as we presume — and may, in fact, be rewarding in some ways.”

“Instead of giving the same old sweaters and gift cards for Christmas this year, try putting something a little more unique under the tree. The furious search for present perfection can be a herculean task, which is why we pounded the pavement for you and compiled some locally made items to put on your holiday shopping list.”

Great compilation. Too late for me and my gifts but good to know where to get what for future shopping.

“If there’s an image that summarizes my idea of complete horror, this is it: a wolf spider carrying dozens of babies on her back. It’s the only spider in the world that does this. It’s also the only spider that carriers her eggs in a round silken globe attached to her abdomen, like a human would carry a growing baby.”

Major shudder. Spiders are so scary.

“A pair of Dutch TV hosts ate each other’s flesh to know what it tastes like in a controversial segment to air Wednesday. Hosts Dennis Storm and Valerio Zeno went under the knife to have a piece of muscle removed from a left butt cheek and abdomen.”

That is absolutely disgusting.

“A family pet missing for months after escaping from a cargo hold at the Edmonton International Airport has been found safe and sound in Leduc, more than five kilometres away.”

“A black cat named Stewie pats the head of crying baby Connar, lulling him to sleep.”

“His form was good, his depth perception could use a little work.”

“A couple of cats enjoying a bowl of food when one cat decides the other has had enough.” 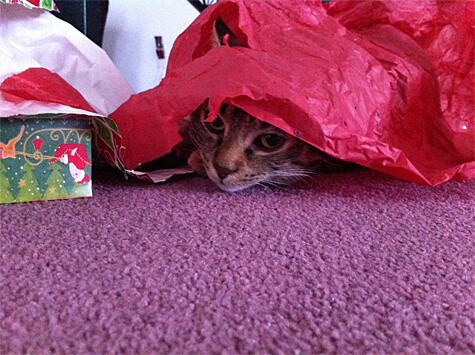 Linda Hoang is a Canadian blogger based in Edmonton, Alberta, who writes about travel, food lifestyle and pet topics. She's also a seasoned social media/digital strategist with a journalism background. Linda loves exploring the world with her husband Mike, eating their way through cities, supporting local businesses, and photographing Instagrammable Walls. She is the founder of the Edmonton International Cat Festival and a fur-mom to two cats and two dogs.
PrevPreviousClicks of the Day: Monday, December 19, 2011 Edition!
NextClicks of the Day: Wednesday, December 21, 2011 Edition!Next