“Called Retrieved, it’s a series of portraits of the only 15 surviving search and rescue dogs (down from 90) who served at September 11th attack sites.”

:'( Great shots. Brave dogs. What a great idea for a photo series.

“Political news website Talking Points Memo ran 14 mugshots of alleged members of hacker group Anonymous on Friday, and subsequently was brought down by a hacker attack. Coincidence? We think not.”

Duh. And it likely will at the rate our “scientists” are experimenting with crap.

“The average American consumes about 42 pounds of high-fructose corn syrup annually. Forty-two pounds is the size of about six newborns.”

“Like baseball cards and comic books, videogame collecting is fast becoming a popular and expensive hobby.”

“Canada’s federal regulator has ordered broadcasters to turn down the volume on loud television commercials.”

Lol hooray! I never understood why the commercials were so dang loud.

“The Bank of Nova Scotia is warning that Canada could be among the first of the world’s advanced economies to fall into a another recession.”

“The Canadian Union of Public Employees says that after a 10-day vote, employees voted 98 per cent to back a strike.”

Hm. Did I mention that on my flight home my Air Canada flight attendant was terrible?

“Imagine you could visit one of those anonymous online dating sites and quickly identify nearly every person there, just from their photos, despite efforts to keep their online romance search a secret. Such technology is so creepy that it was developed, and withheld, by Google — the one initiative that Google deemed too dangerous to release to the world, according to former CEO Eric Schmidt.”

Scary but not surprising.

“Beijing set to beat London and Atlanta as world’s busiest aviation hub with a new airport the size of Bermuda.”

That would an exhausting walk from gate to gate, lol.

“A Canadian-led team of scientists may have solved the biggest whodunit in Earth history in a study showing that the all-time greatest mass extinction on the planet — which wiped out about 90 per cent of all species 250 million years ago — appears to have been linked to rising levels of ocean acidity.”

“A MAJOR solar storm would not only damage Earth’s infrastructure, it could also leave a legacy of radiation that keeps killing satellites for years.”

Bad implications for all tech that uses satellites…

Great photo. (At first it looks like there’s only 4 moons in sight but the giant one on the side is a moon – not Saturn!)

“Astronomers have announced a whole new passel of planets orbiting stars near the Sun: 50 more, the single largest group ever announced at one time*. It’s an indication of just how good we’re getting at finding these things. Even better: many of these planets are at the upper end of what we might call Earth-like.”

We are not alone in this big, big universe!

“Six-foot predator had long fangs, “smiling” face. The 6-foot-long (1.8-meter-long) Laccognathus embryi was “the kind of fish that was waiting to lunge out to grab whatever was in front of it.”

Whatever! I love Kate.

Wow!! Maybe there is hope for humanity… lol how bitter am I?

12 minutes long is too long for my video A.D.D but I did scroll through and it did look extremely scary, lol.

“A team of hot-rodders in Lincoln, Neb., has gone 320 miles an hour in a jet-powered school bus.”

Lol. This seems a bit unnecessary. 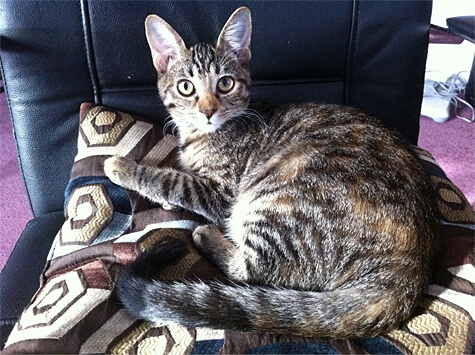 Lol Thor can look really big at some angles.

Linda Hoang is a Canadian blogger based in Edmonton, Alberta, who writes about travel, food, lifestyle and pet topics. She's also a seasoned social media/digital strategist with a journalism background, the founder of the Edmonton International Cat Festival and co-founder of Stop Race Based Hate, an online anti-racism education tool. Linda loves exploring the world with her partner Mike, eating their way through cities, supporting local businesses, and photographing Instagrammable Walls. Linda is a fur-mom to two cats and two dogs.
PrevPreviousClicks of the Day: September 9, 10, 11 2011 Weekend Edition!
NextFeature Story: Edmonton’s What the Truck?! and the growing street food movementNext