Feature Story: Edmonton’s What the Truck?! and the growing street food movement

Edmonton’s What the Truck?! and the growing street food movement 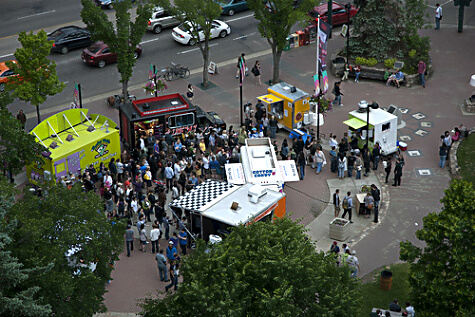 The food truck, street food movement isn’t new, but only recently has been picking up steam here in Edmonton.

Fat Franks, Eva Sweet, and Filistix are just a few familiar mobile food vendors that Edmontonians have come to embrace, with more trucks popping up over the past few months alone.

That’s where “What the Truck?!” comes in.

Described as “a celebration of Edmonton’s food trucks, combining street food with pedestrianism and downtown vibrancy,” “What the Truck?!” is the brainchild of local bloggers Mack Male and Sharon Yeo.

The pair came across San Francisco’s Off the Grid, a gathering of about 20 food trucks in a parking lot, and loved the idea so much they decided to bring it to Edmonton.

“The atmosphere was great, and the excitement for food trucks was palpable,” Yeo said.

“Mack and I thought, ‘why couldn’t this happen in Edmonton?'”

The first “What the Truck?!” food extravaganza took place on June 24.

It will feature nine food vendors, up from seven at the first event.

One of those vendors include Eva Sweet waffles, a popular waffle food truck in Edmonton.

Eva Sweet was one of the original vendors at the first “What the Truck?!” and will also be serving up treats at Friday’s sequel.

The waffle truck took to the streets just over a year ago and Patricia Foufas, one half of the husband and wife duo behind the truck, says since they started, they’ve seen growing demand from Edmontonians for street food.

“When we began there were not as many out there, but we had some great quality in the ones that were here, like Fat Franks and Filistix,” Foufas said.

It’s a growing culture all across North America.

“I think people are ready for a more market-style street corner food delivery,” Foufas said, who adds that food trucks provide convenience for both vendor and customer.

North America’s street food culture is growing at such a pace that there’s even been a website created called Roaming Hunger, which is dedicated to helping foodies “follow the street food movement.”

“North America is one of the last places to embrace it.”

Yeo agrees Edmonton in particular is behind when it comes to the street food trend, but if interest in “What the Truck?!” and the growing number of vendors in the city hints at anything, it’s that Edmonton is well on its way to making a mark in the street food industry.

“It’s difficult to talk about the street food “industry” and not compare it to benchmarks like Portland and New York – so in that sense, we have a long way to go. But it has been a great year for street food in Edmonton, with “Drift”, “Nomad” and “Molly’s” now in the picture, augmenting what was already a burgeoning scene,” she said.

“We’d love to see even more food trucks, there is definitely room to grow and a lot of concepts still unaccounted for.”

Resnick says he fell in love with street food because he thinks it’s one of the best ways to “taste” a city or country.

He, like Male and Yeo, also feel street food is a great way to liven up areas and bring together communities.

“Edmonton will be brought together in a communal environment with its street food event,” Resnick adds.

Vancouver is currently the only Canadian city with food truck vendors listed on the website, but Edmonton’s own Eva Sweet, Filistix, and Nomad trucks have all made appearances in the “Other” cities section of the site.

Resnick said that with Edmonton’s growing number of food trucks, it will soon be added to Roaming Hunger’s list of cities as well.

Several hundred people came out to the first “What the Truck?!” event and the organizers predict those attendance numbers will double this time around.

If the Facebook Event is any indication, over a thousand Edmontonians could crowd Abbey Park on Friday. 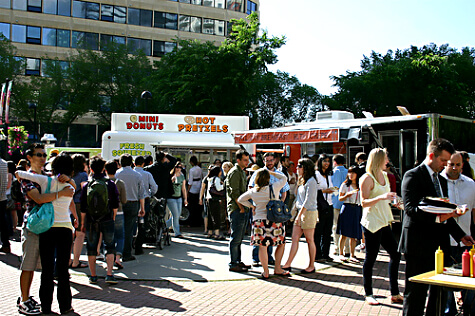 “What the Truck?! 2” food extravaganza will feature the following menu items: 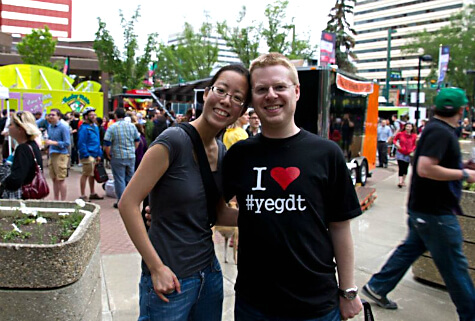 Linda Hoang is a Canadian blogger based in Edmonton, Alberta, who writes about travel, food, lifestyle and pet topics. She's also a seasoned social media/digital strategist with a journalism background, the founder of the Edmonton International Cat Festival and co-founder of Stop Race Based Hate, an online anti-racism education tool. Linda loves exploring the world with her partner Mike, eating their way through cities, supporting local businesses, and photographing Instagrammable Walls. Linda is a fur-mom to two cats and two dogs.
PrevPreviousClicks of the Day: Tuesday, September 13, 2011 Edition!
NextClicks of the Day: September 16, 17, 18 2011 Weekend Edition!Next