Welcome to the three-day roundup!! (A long time coming)

I was on vacation, hence the lack of Clicks of the Day. Sorry if you’ve missed it! ;)

“The FBI is investigating the NBC News Twitter account hacking committed by perpetrators who posted bogus information about the hijacking of a civilian airliner that supposedly crashed into Ground Zero in New York.”

Craaazy. The fake tweets were retweeted by hundreds of users! Good warning for not believing everything you see on Twitter – even if it’s posted by a credible news source.

“Three journalists involved in faking a live cross to the Nine News chopper have tonight been fired, and the network’s Queensland news director Lee Anderson has resigned.”

What a crazy story! Wow, talk about unethical.

Average web usage for Americans in 1996 = a half hour per month. In 2001 = 27 hours per month. That’s quite the jump lol. Funny infographic too because of how ugly the 1996 fonts and colours are, LOL. Good information though!

“This week Apple introduced a collection of new short-form “books,” called Quick Reads, that are like short stories, long articles or packs of recipes, priced at just a fraction of the cost of what users pay for a full volume. Amazon introduced a similar concept back in January 2011 with Kindle Singles–essays, short stories and other quick reads priced from one to three dollars.”

I don’t know, I am not likely to pay for a short story or a long article, lol.

“You probably never looked good in your passport photo, but since August 2003, you’re also not allowed to look happy.”

“Not only is joking about terrorism in poor taste, it’s also illegal.”

“A 42-year-old woman is being charged by Dutch prosecutors for allegedly phone stalking her ex-boyfriend by calling him 65,000 times!!! To call that many times within one year, she had to have called his phone approximately 178 times a day!”

Wow. What a winner!

“Yeti the dog already had a litter of pups to care for when the piglets adopted her as a second mom. Ever since then, the Cuban farm dog has been pulling double-duty, nursing not just her own young but also the 14 swine.”

That’s a little weird but… cute?

“McDonald’s is spending $1 billion to renovate all its Canadian locations in an effort to make its restaurants look cozier, raising the stakes in Canada’s quick-service wars.”

Sad day for Edmonton media! The Edmontonian says goodbye. What a great impact they’ve had on Edmontonians on Edmonton media! I also want to thank Jeff/Sally for crossposting the 3 Feature Stories I did for my website. Very nice of them to do and it always drove up traffic numbers on my site. They rock!

Raking in the big bucks.

“Twitter and Bing have renewed their real-time search partnership.”

“Scientists at the University of Geneva have successfully tested out a rainmaking technique triggered by shooting laser beams into the sky.”

“2011’s college graduates are finding the job market a bit more welcoming than the class before them did — a trend made possible by high corporate profits this year, one of the few sectors of the economy to perform strongly in recent months.”

“Retailer Target has started a hiring blitz in advance of its 2013 launch in Canada, promising to hire “thousands” of Canadians as the iconic U.S. chain opens stores north of the border.”

The new micro-site for Global Edmonton Morning News looks great! Looking forward to seeing how the blogging pans out, lol.

Sorry Apple competition, you ain’t got no advantage now, lol.

“Most Canadians are living paycheque to paycheque, with 57 per cent saying they would be in dire financial straits if their pay was delayed by as little as one week.”

Interesting read and interesting topic. One of the first things I thought when 9/11 was happening was – Wow, this is going to be in textbooks one day. (Seriously, I’m a nerd lol). Interesting now that it’s at the point where it actually would be in textbooks.

How amazing is that?! I was sure the kid was goner… as sad as that sounds, it just wasn’t looking good. So happy this didn’t turn into a terribly sad story.

“Barrie Hayman has a new best friend – an 11 week-old duck that follows him everywhere he goes.” 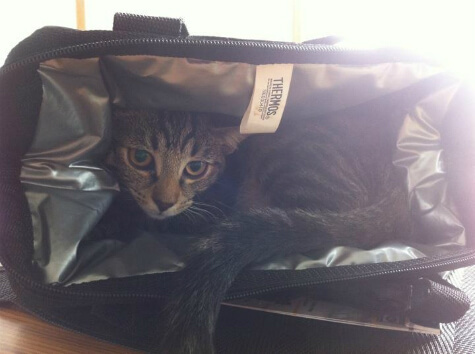 Thor always wants me to take her to work in my lunch bag, lol.

Linda Hoang is a Canadian blogger based in Edmonton, Alberta, who writes about travel, food lifestyle and pet topics. She's also a seasoned social media/digital strategist with a journalism background. Linda loves exploring the world with her husband Mike, eating their way through cities, supporting local businesses, and photographing Instagrammable Walls. She is the founder of the Edmonton International Cat Festival and a fur-mom to two cats and two dogs.
PrevPreviousFall 2011-12 TV Shows I’ll Be Watching!
NextClicks of the Day: Tuesday, September 13, 2011 Edition!Next