“The editorial says parking charges are a health-care user fee in disguise, and an impediment to good care.”

Caaash grab. I agree with this – sick people and their families have enough to deal with than worrying about parking too.

“Alberta’s health minister says the government has no plans to reconsider parking fees at provincial hospitals.”

“Canadians say they don’t have enough time to exercise or to eat healthy foods, but a leading agency in the fight against cardiovascular disease says taking time now to live a healthy lifestyle can mean, plainly, more time to live.”

It is hard to fit exercising in, cooking healthy meals, working and leisure activities all in a day :(

“The researchers were most surprised to find that a strong sense of justice was negatively correlated with a willingness to apologize, perhaps suggesting that contrition and an “eye for an eye” philosophy are incompatible.”

Some obvious results but cool that MacEwan researchers are in the Scientific American :-)

“The conclusions are based on an analysis of the genetic diversity in populations of dogs in various regions of the world. The widest range of genetic diversity is found in the eastern Asian region, while dogs in other regions contain only portions of the total complement of eastern Asian genetic material. This indicates that these wider populations are descended from smaller groups that spread out from the Asian region in the past.”

“E-mails from the new CEO, Tim Cook, began landing in the inboxes of enthusiastic Apple fans and on the same blogs that followed Jobs’ every word. Cook replied to several people who sent notes of congratulations.”

I can’t imagine how much email he (and before him, Jobs) must have gotten, so that’s really great that he replies.

“A third of respondents have worked longer, cut expenses, and experienced increased stress due to the global financial situation.”

“Sixty-five million historic newspaper articles, covering the most significant events over the last 300 years, are now fully available online from today in a new archive created by the British Library.”

“Cyber Monday online sales have pushed mobile payments above and beyond this year, with eBay’s PayPal seeing a 514 percent increase in mobile payments compared to last year.”

Cha-ching. I on the other hand didn’t buy anything on Cyber Monday. (Not payday yet, too broke, not worth it lol)

“‘You can’t regret your fate,’ Ms. Peters once said, ‘although I do regret my mother didn’t marry a carpenter.'”

“The incident began Nov. 21, when Sullivan attended a Youth in Government program at the state Capitol. At the event, she tweeted: “Just made mean comments at gov brownback and told him he sucked, in person #heblowsalot.””

Really interesting but the most interesting part of this story is that now she has 10,000+ followers. So jealous, lol.

“About 400 jobs are on the block, roughly half of which are to be eliminated through buyouts. About 100 employees will be laid off and another 100 or so positions will be done away with through attrition.”

A jet pack among others (including the Harry Potter Knight Bus, lol). Humans are great with their inventions.

“The CEO of one of Europe’s largest IT companies has told his staff they are to stop emailing each other stating that it is no longer an “appropriate” communication tool.”

“New research helps explain why at moments of peak pressure, virtually all of us are vulnerable to similar failures, finding it harder to recall key words at the right time and almost impossible to focus on the task at hand.”

There always appears to be an explanation, lol.

“A quirky Montreal architectural landmark could be upstaging some of the world’s most famous buildings in the race to be immortalized as a popular children’s toy.”

“’Tis the season when we tend to eat more and exercise less, or not at all. It’s a recipe for disaster for the waist and weight. But that could change by trying the ultimate in fusion cooking: exercising while you cook.”

“Paulina Gretzky, the lingerie-wearing, nightclubbing, poolside-prancing daughter of Wayne, took down her racy Twitter account over the weekend – and it might have been at least partially Daddy’s doing.”

“An old-timey recap of the of a rousing fight of the century between “Looney” Lenny Swiftfoot and Billie “The Brawler” Montrose.” 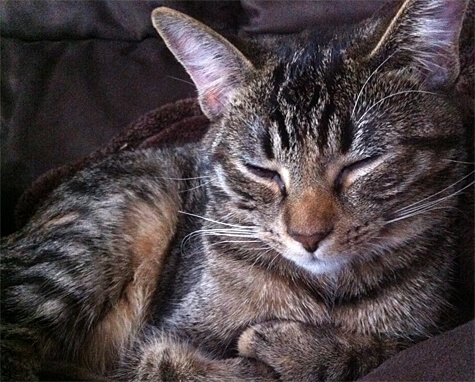 Linda Hoang is a Canadian blogger based in Edmonton, Alberta, who writes about travel, food lifestyle and pet topics. She's also a seasoned social media/digital strategist with a journalism background. Linda loves exploring the world with her husband Mike, eating their way through cities, supporting local businesses, and photographing Instagrammable Walls. She is the founder of the Edmonton International Cat Festival and a fur-mom to two cats and two dogs.
PrevPreviousClicks of the Day: Nov 25, 26, 27 2011 Weekend Edition!
NextClicks of the Day: Wednesday, November 30, 2011 Edition!Next