“Efforts to create an army of cyborg insects are being pursued by a team of US-based engineers.”

Oh. Good. Because nothing can go wrong with this plan. Ugh.

“Inserting superflous “dos” and “go aheads” grabs a passenger’s attention early in an announcement, so the flight attendant doesn’t have to repeat himself.”

Makes sense :) By the way the Air Canada flight attendant I had during my weekend trip in September was TERRIBLE.

“Adbusters, the Vancouver-based magazine, is urging its disciples to “Occupy Christmas” by boycotting holiday gift shopping.”

That is a very silly proposition.

“Marcus Thompson, found the DSLR washed up near a wharf while on a diving job in Deep Bay British Columbia, Canada and decided to take it home to find out what could be salvaged.”

Amazing that photos could still be salvaged!! and great that the owner of the camera has been identified too!

I don’t even know what “Squeezed Middle” – which won for word of the year – even is!

“An original iPad 3 prototype had a 3D screen. However, the source said that the design was scrapped because Apple “didn’t want it to be a gimmick.” The source did not rule out Apple returning to 3D screens in the future, so start saving up now for your 3D iPad 47.”

I hope Apple doesn’t do 3D screens I think the Nintendo 3DS – while glassesless – is terrible and 3D TVs seem so useless when you need a jillion different items to make it work. Also:

“The website Patently Apple, which covers Apple patents, uncovered a patent that Apple secretly purchased from Swedish researchers that could give iOS devices the ability to scan and recognize your face.”

Lol, Apple wins so many patents!! But facial recognition, it was only a matter of time.

“Wei Xinlong, a college student at the Northeast Normal University in Changchun, really wanted to make his girlfriend, Sun Shasha, very happy. He knew she would love to be in possession of the world’s No. 1 passion possession, the iPad. However, he didn’t have the money to effect that love. So he set about building an iPad from scratch.”

Wow how cute is that!!! Gotta love geek love.

“Snacking, or eating mini-meals can be a very effective weight loss and weight maintenance tool. Eating at regular intervals thought the day, keeps you from being hungry and also keeps your blood sugar and energy levels more even. Snacking is an effective way to bridge those long intervals between meals.”

Just have to make sure you’re eating healthy food… lol.

“Research In Motion Ltd. is stepping up its move into mobile payments, announcing a pilot project in Spain that will see a version of Telefonica Digital’s Wallet technology deployed on BlackBerry smartphones.”

“The rover is now on a lengthy journey – almost 570 million kilometres – before its scheduled landing on Mars on Aug. 6, 2012. NASA’s newest mission is its most ambitious yet, and space enthusiasts around the world are on the edge of their seats to see if the trip will be successful.”

Includes a Canadian-made sensor. Yay, Canada! I hope it finds aliens out there! :)

“Functioning members of American and Canadian societies who are unaware of the goings-on in the world would rather actively avoid tough news than exercise effort to learn more. Ignorance is cyclical and conscious—and that’s as scary as any economic or environmental disaster.”

I am all about the news but I find a topic I definitely try and stay away from is anything animal cruelty-related. Is that ignorant of me!? It just makes me cry and sad for humanity.

“Research shows that Americans’ spending has increased over the past few decades as people literally try to buy happiness… But money and material possessions will not bring you happiness, and not only that, they can cause more harm than good.”

I don’t know I feel like if I didn’t have money woes I’d be a lot happier each month, lol.

“The Miami Gardens resident uses a concoction of super glue, tire sealant, cement, and mineral oil to plump up unwitting patients’ curves – as well as her own, evidently. If that sounds dangerous to you, that’s because it absolutely is! Morris is now being charged with practicing medicine without a license.”

“Three adolescent boys were arrested in Saguenay, Que. on Friday after a 12-year-old girl was doused with gasoline.”

Absolutely messed up. Terrible parents too no doubt…

“Several members of the Lakewood Midget AA hockey team are in hospital after their bus, which was taking them to a game, rolled on Highway 16, about 20 minutes east of Hinton early Sunday afternoon.”

Including your nails and hair, peeing, pooping and even giving birth?! Eep.

“Dreaming effectively functions as a way for the brain to process painful memories and systematically take the edge off them. While it obviously can’t erase our traumas, it appears that such deep sleep does have some serious anti-stress benefits.”

What about for people who don’t really have painful memories? (Or else I’ve blocked them all out lol)

“Christmas trees are designed to stand out, but some of them stand out even from the standouts. Feather trees are one example; Whoo-ville trees are another.”

“Instagram photos aren’t just for sharing online anymore. You can turn them into photo books, frame them in four-inch bamboo shadowbox frames, create a collage with them on iPhone cases, turn them into iPad screensavers and now, print them on canvas for your wall.”

Pretty sweet quality too! Something to look into in the future for sure.

“Things are looking up for the little ginger-coloured seal pup whose fate touched the world after being rejected by the rest of its sleek black family… Two months on and Russians have taken the rare albino seal – who turns out to be female – to their hearts.”

Such great news!!! So happy for this seal.

“Kitten siblings take turns making mom go after them down the slide.”

This is ADORABLE!!!! So, so cute!! hehe. What a good mother cat, well it wasn’t fast enough to help the second kitty but lol. 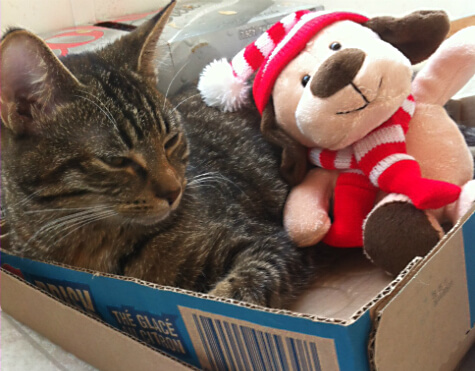 Thor’s newest friend for the holidays!

Linda Hoang is a Canadian blogger based in Edmonton, Alberta, who writes about travel, food, lifestyle and pet topics. She's also a seasoned social media/digital strategist with a journalism background, the founder of the Edmonton International Cat Festival and co-founder of Stop Race Based Hate, an online anti-racism education tool. Linda loves exploring the world with her partner Mike, eating their way through cities, supporting local businesses, and photographing Instagrammable Walls. Linda is a fur-mom to two cats and two dogs.
PrevPreviousClicks of the Day: Thursday, November 24, 2011 Edition!
NextClicks of the Day: Tuesday, November 29, 2011 Edition!Next