“The book is stocked with cute illustrations and characters from the popular, bird-slinging mobile game. As the title suggests, the cookbook is packed with egg recipes including breakfast dishes (omelets), heartier fare (egg sandwiches), desserts (souffle) and more adventurous options such as “Egg Sushi.””

This would be a great gift!!

“With a price tag of $80,000, Allen is aware that his monumental robot is not something the average person will be able to afford. Though his hope is to eventually make his living off the building and selling of these metal works of art, Allen has an even more personal reason to be so invested in the sale of his first creation.”

“Popular gaming magazine GamePro has shut down its U.S. operations after 22 years of publications by its parent company IDG.”

That is sad. I remember GamePro growing up! (My brothers were/are gamers lol).

“According to a psychology study conducted at the University of Ottawa, women get downright nasty to attractive females, especially if she has the temerity to wear a sexy outfit. 97% Reacted With Hostility to Sexy Female Subject.”

“The first wave of charges has been approved against 25 suspected Stanley Cup rioters by the Crown Counsel. In total, 61 charges have been approved today… The mean age of the charged individuals is 22.”

Tarnishing my age. lol. But glad charges are finally being laid.

“A handful of University of Alberta classes have introduced Wikipedia to their classrooms as a teaching resource this past semester, despite criticisms about the website’s credibility in educational institutions.”

“According to the woman, just prior to the explosion, she had been cooking tofu and had been rinsing the pan with water; that’s when she says the explosion occurred. The explosion was strong enough to blow out a 4 x 6 window onto the street.”

Your weird news of the day.

Cool list for Facebook to release. It’s a Clicks of the Day list in itself, lol. How many articles had you read? Me, not so much actually.

“The information that is dictated on the Apple iPhone 4s using the Siri dictation feature is sent to servers that reside in the US and that Apple, its related companies and agents have access to the contents of what is dictated.”

Really interesting. Careful what you say to Siri.

“Want to get your kids to the top of the class? One economist says the secret may lie in the age gaps between siblings. Having at least two years between brothers and sisters makes for better math and reading scores.”

I am not sure if I am a morning person or not. But I am certainly not a night person so I guess morning would be the other alternative, lol.

“A man in Atlanta has hauled in a million-dollar lottery payday for the second time in just three years.”

Some people just have all the luck.

I didn’t realize Edmonton was a dumping ground for prisoners. Yikes.

“The Eiffel Tower could be transformed into a giant green “jungle” covered in 600,000 plants as part of an environmental scheme.”

“The iPhone was reportedly charging by the bedside of its owner, Ayla Mota, when it allegedly began to emit sparks.”

“A 66-million-year-old partial skeleton discovered in Saskatchewan has been confirmed as a new species of plant-eating dinosaur.”

“Visitors are invited to climb the narrow steps, make room for others to pass, and stop to enjoy the view of the Rhine.”

I wouldn’t really call it a roller coaster, lol. But good way to grab my attention.

“A rare and pristine copy of the first issue of Action Comics, famed for the first appearance of Superman, has set a record Wednesday for the most money paid for a single comic book: $2.16 million.”

“HP CEO Meg Whitman recently said that Apple is poised to be the dominant PC maker in 2012.”

“Canadian men are tops when it comes to being hairy. The Movember campaign netted in excess of $33 million in Canada — more than in any other country in the world.”

“A group of kittens watch a figure skater do his thing.” 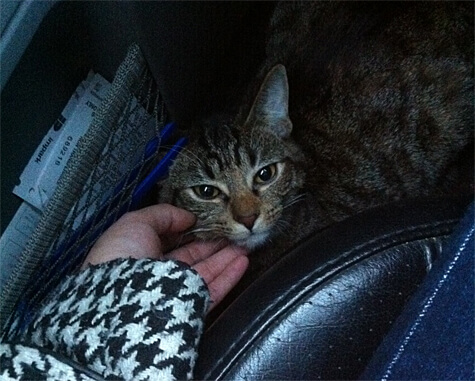 Scaredy Thor hiding on the floor of my car as we drove to the vet.

Linda Hoang is a Canadian blogger based in Edmonton, Alberta, who writes about travel, food lifestyle and pet topics. She's also a seasoned social media/digital strategist with a journalism background. Linda loves exploring the world with her husband Mike, eating their way through cities, supporting local businesses, and photographing Instagrammable Walls. She is the founder of the Edmonton International Cat Festival and a fur-mom to two cats and two dogs.
PrevPreviousClicks of the Day: Tuesday, November 29, 2011 Edition!
NextClicks of the Day: Thursday, December 1, 2011 Edition!Next