Lol, I don’t think apps would make good gifts. Well maybe as a stocking stuffer or something. Gift cards can be so impersonal but I’m liking them more and more these days.

“On Tuesday, the CRTC released a decision rejecting Bell’s revised proposal that would see a smaller provider charged for the aggregate total of data used by all its customers. The CRTC instead introduced a pricing model that would see smaller providers pay for the total capacity they need, but not the volume of data downloaded.”

I am not sure how or if this would affect the average user. (And It doesn’t look like I’m alone, lol “Given the complexity of new rate charges, many industry experts were still examining the material after the CRTC released its decision late Tuesday afternoon.”)

“I figure I’m only going to get one shot at writing a tribute to the big fella, because the next time would be when he dies, and he’s probably going to outlive us all.”

“9 a.m. Eastern Standard Time. That’s when the largest number of people in the world are likely awake (and on their computers).”

“If you watch one video today, make it this one — the shot of chocolate sauce sliding off a pristine pair of white tennis shoes looks like pure CGI. But it’s real.”

Pretty badass. Would hate for it to end up years in the future finding out that it causes cancer or something, lol.

“It would appear that nobody wants to use their mouth anymore to get drunk. Much to their parents’ dismay, teens have long been known to secretly consume alcohol, and the latest method reportedly has them doing so with tampons and bongs.”

Some people can be so stupid.

“It’s Edmonton’s most expensive, most exposed and best piece of public art, a massive pile of roughly one thousand gigantic silver balls located at the southeast on-ramp of the Quesnell Bridge. It’s called the Talus Dome, it’s been around only for a few weeks, but it’s already loved, hated and been defaced.”

“Business card orders show that “ninja” is among the popular monikers out there, as are Rockstar, Guru, Wrangler, Head Cheese and Geek. All of the terms take a page from the social media world in trading humdrum job descriptions for some personal panache.”

Great story, haha! When I finally do get my own business cards, I hope to have a snazzy and exciting title as well. maybe, “Multimedia Magician”, lol.

“Bejeweled was their first game, its explosive success the reason for the name change from Sexy Action Cool to PopCap Games, a company considered by industry leaders to be at the forefront of casual gaming.”

Very cool that he’s from Edmonton!!

“It is the biggest pain in the butt for most personal trainers because clients that don’t do this usually don’t see the results they desire. I am referring to the dreaded food journal. It is No. 1 on my list of priorities for every client who is serious about getting results. Those who just want to exercise and work hard a few times per week but won’t do this simply do not see major changes in their body fat levels.”

Probably wouldn’t be a bad idea to try a food journal. Plus it would be a good excuse to buy an physical journal book – lol haven’t bought one of those in years.

“Up to 1,000 people may have been exposed to measles in downtown Edmonton and at University Hospital, Alberta Health Services said Tuesday. Only people who have not been vaccinated or have not had the contagious disease should be concerned that they were exposed to the person who had measles.”

“In the foreground flows Iceland’s 200-foot-tall Skógafoss waterfall — but the spray from the falls has become illuminated by the beams of an intensely bright full moon, giving rise to a rare sight known as a moonbow, or lunar rainbow (no sunlight direct sunlight in this photo, folks). And to top it all off, in the background there are green streaks of aurorae dancing across a star-studded night sky.”

“Before Ed Turner and Avi Loeb tell you about their research, they want to make one thing perfectly clear: they do not claim that there’s a city on Pluto. But if there were one, they say, we could see it. And as they suggest in a paper they’ve submitted to the journal Astrobiology, it’s worth taking a look, just in case.”

“Archaeologists have discovered a bronze artifact in ancient Eskimo settlement…which is pretty surprising, considering ancient Alaska never actually went through the Bronze Age. This artifact was likely cast long ago in Asia before making its long, mysterious journey Northward.”

“The 24-year-old wasn’t sure what to expect when he requested Facebook provide him with a record of the personal data it holds on him, but he certainly wasn’t ready for the 1,222 pages of information he received. This included photos, messages and postings on his Facebook page dating back years, some of which he thought he had deleted, the times he had clicked “like” on an item, “pokes” of fellow users, and reams of other information.”

Crazy! But not really surprising.

“Former Penn State assistant football coach Jerry Sandusky admitted he took showers and “horsed around” with young boys, but he insisted he is not a pedophile who criminally assaulted children, according to his lawyer and an interview he gave to NBC.”

Crazy that he even gave this interview.

“Several years after the boom in Alberta, Fort McMurray is ready to show the world that they’re still the province’s economic engine. Vassy Kapelos reports.”

“Vassy Kapelos reports on how the city of Fort McMurray has addressed the issues that come with being an industrial hub in the province.”

Great series giving us a closer look at the “land of opportunity” – Fort McMurray. Great stories, writing, shooting and editing! Part 3 on Wednesday.

“In the supernova explosion the heavy elements like gold, platinum and uranium are formed and when the jets hit the surrounding gas clouds, they will be enriched with the elements and form stars that are incredibly rich in heavy elements.”

The universe is so complex and interesting :)

“The order from the New York Supreme Court does not prevent protesters from gathering in the park, but says their First Amendment rights do not include remaining there “along with their tents, structures, generators, and other installations to the exclusion of the owner’s reasonable rights and duties… The park’s owner — Brookfield Properties — has raised sanitation and health concerns. After the ruling was issued, police allowed protesters to return to the park, but bags were checked for newly-prohibited items. If the new regulations continue to be enforced, the substantial infrastructure that protesters had established — including a library and comfort center — will be difficult to recreate.”

The end begins for the Occupy movement?

“A Toronto judge has postponed the eviction of Occupy Toronto protesters while he rules on constitutional issues raised by applicants for an injunction against city bylaw officers.”

It is surprising how long the movement did end up lasting though (well – still lasting but I feel the evictions are definitely a’comin’).

“The schoolgirl staple has branched out this year, hitting the runway, rounding the red carpet, and even moving onto the tennis court with a more edgy and modern twist.”

Maybe I’ll do a braid to work tomorrow! Heehee.

“A montage of soldiers returning home from long deployments being greeted by their dogs.” 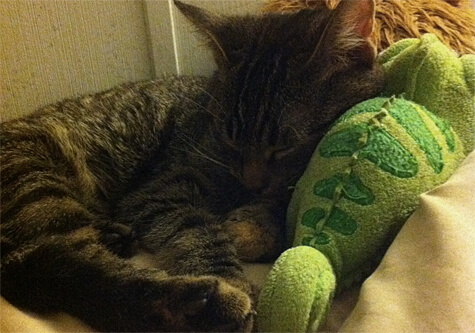 Linda Hoang is a Canadian blogger based in Edmonton, Alberta, who writes about travel, food lifestyle and pet topics. She's also a seasoned social media/digital strategist with a journalism background. Linda loves exploring the world with her husband Mike, eating their way through cities, supporting local businesses, and photographing Instagrammable Walls. She is the founder of the Edmonton International Cat Festival and a fur-mom to two cats and two dogs.
PrevPreviousClicks of the Day: Monday, November 14, 2011 Edition!
NextClicks of the Day: Thursday, November 17, 2011 Edition!Next