“The paperless, plasticized bills “are more secure, more economical, and better for the environment than any we have issued previously.”

Looking forward to getting my hands on them ;)

“We searched through online stores and gaming blog buzz to curate a list of titles to gift to the gamer on your holiday shopping list. Here is our top 10.”

Call of Duty: Modern Warfare 3 is on Mike’s wishlist. Lols that the Cars game is on the list but understandable since young boys seem to be crazy over that franchise (for whatever reason, the movie(s) never interested me, at all. And according to reviews, ratings and box office numbers, it didn’t interest a lot of people lol).

“Groupon plans to offer so-called “Epic Deals” starting Nov 15. These will be specific experiences, such as a round-the-world trip and a cooking class and group dinner with Chef Todd English. Groupon also plans to offer a national deal with retailer American Apparel Inc, as well as discounts on products like electronics, home goods and fitness products.”

“Citizen journalists’ contributions are now at the core of how CNN tells most big breaking news stories.”

Important to note that CNN recently laid off 50 workers partly due to technology advances – including ireports/ireporters.

Had no idea he came so close. Sidenote: The Family Guy episode was very funny.

“Virtual Universe Corporation announced today that it has agreed to sell its entire right, title and interest in the domain name VU.COM… for $700,000 USD”

A pretty bland news release as far as news releases go but I linked it because wow – would love to have someone pay me $700,000 for my domain name, LOL. Wouldn’t you?

“United, however, is making a bet that it will catch on in greater numbers and it will be an important amenity. How much will it cost you, the traveler? We don’t know, because United hasn’t said anything.”

I would rather not pay more money for wifi on my flight, lol. Not worth it I can wait until I get to the hotel or something, you know?

“In an effort to keep down the number of strays and cut euthanasia rates, the city will be the first in North America to try a new program to enhance services to pet owners. The program will boost medical treatment for unclaimed pets so they become more adoptable, and is searching for a partner to put identification into a national database so lost animals can be returned more quickly.”

“NBC announced Monday that it has hired Chelsea Clinton to become a full-time special correspondent for NBC News… Ms. Clinton will begin work on stories that NBC expects to use as part of its “Making a Difference” series.”

I find this very lame. Obviously her name and her connections helped get this job. I can’t imagine how many hard-working, qualified journalists would have loved to have that job but are put aside because this chick’s high-profile.

“Mainstream media Twitter accounts rarely retweet others, don’t respond to people and largely focus on promoting their own links, finds a new study.”

Great information here. I don’t believe media organizations are utilizing Twitter as well as they could be, at all. So much room for growth.

“For Pennsylvanians, Penn State football was a revered, life-changing institution, one most people would never dream of questioning.”

Great read. From the outside looking in – I definitely do not “get it” – but reading this helped. Still, either way, child sex abuse scandal should be enough to get people out of their Penn State-religion-like-state.

“I can confirm the route will be changed and Nebraskans will play an important role in determining the final route.”

“Every year there are Canadians killed needlessly by trucks, by getting under the wheels of trucks. Having side guards would protect them. They may get bruised, but it won’t kill them.”

I feel like the problem is bikes on roads in the first place. I am not a cyclist in any way, but I feel like if I was, I’d be terrified of riding on the same roads as cars/trucks. You’re just too close to death by being on the road with them! ‘sticking to sidewalks.

“Anyone who believes that legalization of euthanasia won’t lead to pressure on our society’s most vulnerable individuals to do the right thing and die, and who think legalization won’t make the disabled feel guilty about living on even when they become an economic burden to society is just not paying attention.”

This issue is really tough. The point the above blog brings up is valid but I just think in some extreme cases, dying is just the better solution.

“A 19-year-old football player with Down syndrome scored the final touchdown of the season for his team — thanks to the outstanding sportsmanship of the opposing team.”

This article calls it outstanding sportsmanship but I’ve seen a TV report talking about the controversy surrounding the play. Was it patronizing? Watch the Global Toronto report: “Allowed to score”. Interesting discussion.

“Wildlife experts have accused a marine park of killing a dolphin after allowing a deafening rave to be held in the attraction just a few yards from the mammal’s pool.”

Such a sad story :( With every Clicks of the Day, there’s another shining example of how humans are a poison to this Earth and to animals.

“If there’s one thing YouTube culture has made abundantly clear, it’s that people love their cat videos, so John St. has taken the hint and opened up a new branch of their company: Catvertising. It’s an exciting new project focused entirely on delivering you the cats you love and crave while secretly also trying to sell you stuff.”

“80 people come in to their store wearing khakis and a blue polo shirt.”

This video – and prank idea – is hilarious, but could easily be a minute shorter, lol. #LostInterest 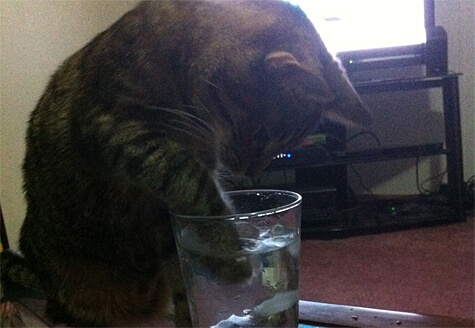 Linda Hoang is a Canadian blogger based in Edmonton, Alberta, who writes about travel, food, lifestyle and pet topics. She's also a seasoned social media/digital strategist with a journalism background, the founder of the Edmonton International Cat Festival and co-founder of Stop Race Based Hate, an online anti-racism education tool. Linda loves exploring the world with her partner Mike, eating their way through cities, supporting local businesses, and photographing Instagrammable Walls. Linda is a fur-mom to two cats and two dogs.
PrevPreviousClicks of the Day: Nov 11, 12, 13 2011 Weekend Edition!
NextClicks of the Day: Tuesday, November 15, 2011 Edition!Next