“‘Enjoy this ringback while we connect your call’ … it’s unprofessional. When a friend calls me, do I really want him listening to music instead of standard ringing? It screams immaturity. I’m all for cellphone add-ons, and I’m not naive to think no one wants features such as ringbacks.”

“A new survey from ING Direct revealed that half of Canadian smartphone users will be banking from their mobile device within 24 months.”

“Will future iPhones hold up better to big drops? They might if they sport special shock absorbers like the one featured in a newly published Apple patent application.”

Cool – aside – man, Apple has and gets so many patents, lol.

“Four young Chilliwack men who dressed as superheroes to confront potential sex offenders have drawn public kudos but are being criticized by police, who say crime-fighting should be left to the proper authorities.”

Their intentions are in the right place but it’s true, it’s really dangerous and probably not something they should be doing… lol really awesome that they’re dressed up though, love it.

“A new survey suggests Albertans are planning to spend more on Christmas gifts than anyone else in Canada.”

It’s not that I want to spend more, it’s just I like buying stuff for loved ones during Christmas :(

“For those looking to build up a nest egg for retirement – or simply to avoid being broke all the time – Golden Girl Finance recently listed the top 10 things to avoid to make sure you don’t go broke.”

I believe Mike and I are building a healthy savings. :)

“At a glance, Socl looks a lot like Facebook and Google+ … The difference with Socl is its emphasis on searching and tagging based on your interests.”

So many social networks, so little time.

“An Idaho man accused of firing an assault rifle at the White House was charged Thursday with attempting to assassinate President Barack Obama or his staff, and prosecutors say he called Obama “the devil” and said he needed to be killed.”

I linked the first two parts but then took a Clicks of the Day break on Wednesday – so be sure to check out the third and final part. Great series.

And so it begins. And by “it” – I mean, the terrible season that is Winter and all of the woes that come with it. Lol.

“It was a marriage so entwined with Twitter; it was only fitting that when Demi Moore announced Thursday her marriage to Ashton Kutcher was over, the social media site lit up and the couple became a trending topic.”

Who really thought their marriage was going to be forever anyway? #seriously.

“Do your research, get multiple quotes, get references…”

So many contractor horror stories out there. Please, please do your research to avoid getting screwed like so many do.

Crazy!! I love dinosaurs. Sad they are gone.

“It was the third of five extinctions in world history, occurring even before dinosaurs roamed… This extinction killed off more than three-quarters of life on the planet in an event scientists have called the Great Dying.”

Also crazy. Be prepared for the next one…

“A true breakthrough is on the way, and promises week-long battery life and 15-minute recharge times. The bad news is that this technology is still three to five years away from the market.”

I very much look forward to this day.

“One set of enterprising parents have ensured a lifetime supply of games after naming their child Dovahkiin after a character in the newly released The Elder Scrolls V: Skyrim.”

“Margie Mullen decided to attach a bike to the TV, so if the kids want to watch TV, they have to pedal!”

“The campaign seeks to contribute to the creation of a new culture of tolerance, to combat hatred, building on Benetton’s underpinning values,” the Italian Clothing and Retail Company said in a statement.”

I am all for the statement (as are the people I unofficially Twitter-polled today :D) but I can understand someone (especially a world leader) being upset about having their photo photoshopped out of context – same sex kiss situation aside.

“As of spring 2012, though, the dream will become a reality — if you have $100,000 to spend, that is. A Dania Beach, Fla., company called JetLev will begin shipping its water-powered JetLev R200 early next year, according to the company’s website. The suggested retail price: $99,500.”

This is Jetsons stuff, people!

“Linda Hoang knows that all too well. The Edmonton resident remembers giving up her winter break three years ago for an internship at a city paper, which she insists played a big role in advancing her career.”

Hehe. An article about winter internships that I am quoted in :)

“The Shelter Pet Project has released two adorable PSAs as part of a larger campaign to promote the adoption of shelter animals.”

“The converse of the popular app, “Write or Die,” which supplies the wordsmith with threats when they stop typing for too long (common warnings include “unpleasant sounds” or phrases like, “keep writing or your work will unwrite itself”), Written? Kitten! provides an image of an adorable cat for every 100, 200, 500 or 1,000 words you complete.”

What a wonderful idea! :) 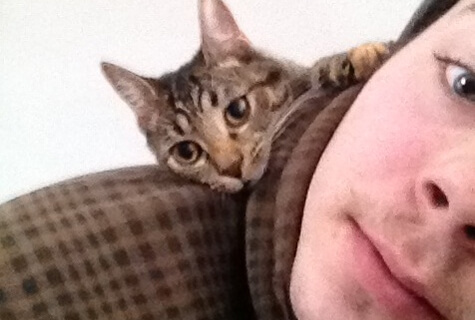 Linda Hoang is a Canadian blogger based in Edmonton, Alberta, who writes about travel, food lifestyle and pet topics. She's also a seasoned social media/digital strategist with a journalism background. Linda loves exploring the world with her husband Mike, eating their way through cities, supporting local businesses, and photographing Instagrammable Walls. She is the founder of the Edmonton International Cat Festival and a fur-mom to two cats and two dogs.
PrevPreviousClicks of the Day: Tuesday, November 15, 2011 Edition!
NextReview: The Loft SandyView FarmsNext