Finally. I hope my mom doesn’t get charged late fees for her mailed bill payments. :(

I didn’t watch all of these videos because I have video A.D.D., but LOL the cat ones are the best. #Biased

“Hate the player, not the game. The daily deal is here to stay.”

LOL. Give The Onion a Pulitzer! :D

I don’t know what name I prefer for my future babies. But it’s not something I have actually sat down and actually thought hard about. I’ll tell you it won’t be something stupid though!! You can also check out how popular your name was in recent years by going here!

Imagine how powerful my laptop would be!! (Proud to say my average WPM is around 140. #speedoflight)

Can you imagine? How can someone be so strong!!

Poor kitty!!!!!!! :'( But hooray that the firefighters rescued her (and named her Piper! So cute!) Listen to her squeal when she’s finally freed.

And the dumbest name goes to… Chattanooga Choo Choo !!

For the amount of entertainment and productivity apps can provide though – about $50 a year for them is nothing! So cheap.

Wow this unbelievable… twins joined at the HEAD.

Some of these are way too bizarre. LOL.

A father home on leave from Afghanistan surprises his son at the son’s 16th birthday. So wonderful!

This is very interesting to me. I’m not sure if it’s something I would do – I feel like it’s kind of the way of the future but at the same time it feels too noisy, too cluttery – not with words but with the shapes, colour and design, lol! Would you submit a visualized-resume?

Good read here — I know when I get married I would like people to either give me money or I would put my gift registry at a travel agency!

Milestone ! But wait till it hits 1 Billion. Yikes!

Apple won their patent for touch screen and now onto the next thing that will ensure they will take over the world! (With Google, lol).

I jumped to New Twitter so fast I barely remember what the old one looks like. And now when I see screencaps I think – archaic! Switch over people!

These are so stunning. You must look at them! Makes me even more fascinated by the underwater world.

I get it with Mike a lot! #Grumpy. LOL just keeding.

So sad. But again everyone – yet another natural disaster… yet another sign of impending apocalypse.

Way of the future?

Lol, just when you think it’s all over…

It breaks my heart that potato chips are the very first words in this article. Kids Vomiting To Lose Weight, Even Before Puberty

Hope it launches in Edmonton soon!

Crazy! Can you imagine the next big star whose actually a big faker using this hand hack! lol

I wonder who they got the idea from, lol.

“Hackers are getting older and having kids” – LOL hilarious. But really, a hacking school for kids? Gah. #StopHacking and speaking of hacking…

FINALLY! But I feel like they are just lying so they can Lulz at us when they surprise strike again later.

What kind of ballin’ 18-year-old is he to be able to afford that? Sheesh.

Lol. Bet he didn’t even have to hand in a resume!

Reminds of the funny bar code commercial I saw awhile back too. Really, really cool designs!

Interesting topic. I’ve had both paid and unpaid internships. Obviously you would always prefer to be taking in some income for your work but I don’t know, employers seeing that you work hard despite being paid really goes a long way too. 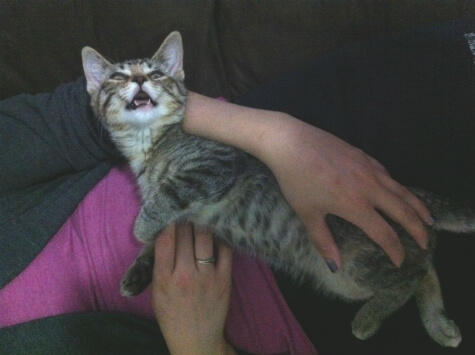 Thor zonked out/high after getting shots from the vet this weekend! LOL.

Linda Hoang is a Canadian blogger based in Edmonton, Alberta, who writes about travel, food lifestyle and pet topics. She's also a seasoned social media/digital strategist with a journalism background. Linda loves exploring the world with her husband Mike, eating their way through cities, supporting local businesses, and photographing Instagrammable Walls. She is the founder of the Edmonton International Cat Festival and a fur-mom to two cats and two dogs.
PrevPreviousClicks of the Day: Thursday, June 23, 2011 Edition!
NextClicks of the Day: Tuesday, June 28, 2011 Edition!Next