“Government numbers suggest Alberta’s rate of sexually transmitted infections is on the decline for the first time since 2004.”

“Apple puts new employees to work on “dummy projects” to see if they can be trusted. After earning their stripes with Apple brass, those employees will then be put on real projects to help the company.”

Lol. Extreme but believable, especially when you’re as powerful a company as Apple.

“If there is a common thread here (beyond Twitter’s ability to attract interesting lawsuits), it’s that established laws are not holding up under the weight of billions of 140-character messages… The bottom line is that Twitter is not just creating new forms of speech but helping shape rules for how that speech can be used.”

Including “Your information can be shared between Google’s services” – “Your private information remains private” – “More relevant and refined search results” and more.

“Children born by Caesarian section are no more likely to become obese than if they are born vaginally, according to a Brazilian study. Past research from Brazil had found a link between excessive weight and C-sections, leading some scientists to suggest that not being exposed to bacteria from the birth canal could make children fatter, but the latest findings — published in the American Journal of Clinical Nutrition — suggest this doesn’t appear to be the case.”

I had never heard of that correlation before to begin with. Although my mom had a C-Section when giving birth to my brother and he did grow through a “fat” childhood phase. HMMM! (He later grew out of that though).

“She’s your BFF, best friend forever, and she can finish your sentences and discern your moods immediately. In times of crisis, she’s always there, and you are a less stressed person for it. Now there’s scientific proof of that.”

Helpful :) Even better are family members who are best friends because best friends can still come and go, family is more likely to be forever.

“Omega-3 fatty acids found in walnuts have been shown to have certain health benefits, including reduced risk of heart disease and some types of cancer. These claims… are well supported by scientific research… This evidence was apparently not good enough for the FDA, which told Diamond that its walnuts were ‘misbranded’ because the ‘product bears health claims that are not authorized by the FDA.'”

“The hiring of Mr. Seidel from a television channel is a coup because of what it says about the seriousness of YouTube’s effort to create an alternative to cable television on the Internet.”

“The Hub explores how the news cafe/open newsroom model provides a different level of community engagement as well as a possible economic plus for the news organization.”

What a concept. I’m trying to picture it in our newsroom.

Lol, the Internet is erupting over this ad :) I only have vague memories of Ferris Bueller’s Day Off so it doesn’t mean as much to me, lol. On another note – Matthew Broderick looks like he’s getting old!

:( One of the best TV couples ever!! I still wish the writers hadn’t taken away Sarah’s memory just a few episodes before the series finale, ugh. It made me so sad. I like happy, fairytale endings…

“It’s the new internet fad that involves your pets, Lion King-ing! Your cats will love it!”

LOL now this is a fad I wholeheartedly can get on board with!! Hilarious. We Lion King-ed with Thor when she was a kitty. Should do it again and upload, haha. 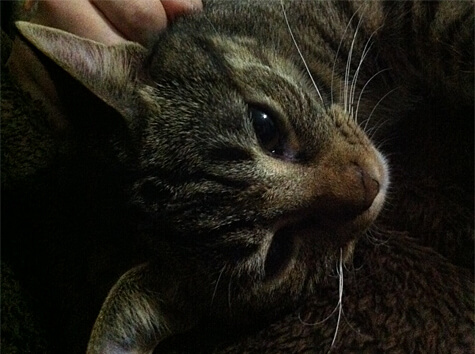 Linda Hoang is a Canadian blogger based in Edmonton, Alberta, who writes about travel, food lifestyle and pet topics. She's also a seasoned social media/digital strategist with a journalism background. Linda loves exploring the world with her husband Mike, eating their way through cities, supporting local businesses, and photographing Instagrammable Walls. She is the founder of the Edmonton International Cat Festival and a fur-mom to two cats and two dogs.
PrevPreviousClicks of the Day: Jan. 27, 28, 29 2012 Weekend Edition!
NextClicks of the Day: Tuesday, January 31, 2012 Edition!Next