This is so wrong.

“After two months of declines in employment data, Canada’s jobs picture is looking anything but bright heading into the new year. A new survey for the Bank of Montreal suggests Canadians are significantly more pessimistic than at this time last year about employment prospects and their firms’ investment plans.”

“Evidence of higher taxes will appear as soon as employees get their first pay cheque of the year, as increases in CPP and EI contributions erode take-home pay… Property taxes will swell in Toronto, Regina, Saskatoon, Edmonton and Calgary.”

“Edmonton East MP Peter Goldring has changed his caucus affiliation from Progressive Conservative to Civil Libertarian after being charged with failing to provide a breath sample to police in December.”

Including “Facebook and Google+ will go head to head for the number one spot” – “Mobile social media will come into its own” – “Social media will become a natural extension of journalism” and more.

Social media should already be a natural extension of journalism. Still makes me shake my head when I see examples of it not being embraced by those in the media.

“The decline, for some, might come as a surprise — virtually every other aspect of wireless is growing unbounded: smartphone saturation, data use, and so on. Indeed, those very trends might be the humble SMS’s downfall. A growing theory is that messaging is losing ground to social networking services like Twitter and Facebook, both of which offer rich experiences on smartphones attached to high-speed data networks that are becoming more ubiquitous by the day.”

“A Canadian man who forgot his passport at home discovered an unusual tool to help him get through U.S. Customs — his iPad. Martin Reisch says a border officer let him cross into the United States from Quebec after he presented a scanned copy of his passport on the computer tablet and his driver’s licence.”

I’m super surprised that this would be allowed actually, just given how strict security is at airports. Cool. Setting a precedent?

“Doctoral student Lara Fenton has launched new research to figure out what circumstances contribute to people feeling a deep and meaningful connection to nature, whether that’s on a backpacking trip through unspoiled wilderness or during a simple walk in Edmonton’s river valley.”

Cool. Though I have to say my experience with nature is extremely limited, lol.

“It took the highest power rates in a decade to get some customers off the couch, with thousands swamping utility retailers with calls and orders for contracts or new floating plans.”

I wonder as well. Our bill was so expensive last month. Hm.

“How would you like to stay 20 forever? It’s a prospect that’s far from being a reality at the moment. But scientists have turned old lab mice young again using stem cells from young animals — a feat that raises the possibility of one day “rescuing” humans from aging with a shot of their own stem cells banked when they were younger.”

I dislike this. We aren’t meant to live forever and we shouldn’t be trying.

“Before passing comment on someone’s “baby bump,” take a pregnant pause. Likewise, give up promoting “shared sacrifice.” And if you’re tempted to proclaim your desire to “win the future,” you’ve lost it here in the present. Michigan’s Lake Superior State University is featuring those phrases in its annual List of Words Banished from the Queen’s English for Misuse, Overuse and General Uselessness.”

Lol, other words include “man cave” “the new normal” and “amazing” Do you agree/disagree?

“There is nothing more stressful than cleaning up your home especially after the holidays… founder of Wellrich Organizers Carolyn Caldwell … spoke about the psychological impacts of a clean home as well as shared her tips on how to get organized for many who have no idea where to begin.”

News you can use!

“The site returned to working order but then stopped on several other occasions, prompting speculation that it was being hit by the arrival of New Year in different parts of the world.”

“This is not the first Steve Jobs, but it’s definitely the most realistic. So realistic that it actually freaks me out. It’s 12 inches high (scale 1:6) and comes on full Apple CEO regalia, from the New Balance shoes to the Levi’s. If you are a freaky fanboy, you can get it for $100 before the Jobs family send a cease and desist letter to the manufacturers, just like they did with the last one.”

Sheeesh, it does look freakishly realistic.

“Do you have change for a million-dollar bill? Police say a North Carolina man insisted his million-dollar note was real when he was buying $476 worth of items at a Walmart.”

“A TV theme song medley performed by the Koren Ensemble. How many can you name?” 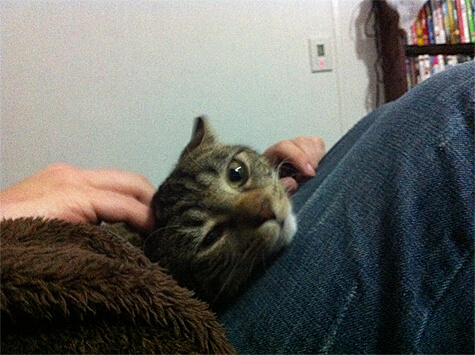 Thor likes getting scratched behind her ear!

Linda Hoang is a Canadian blogger based in Edmonton, Alberta, who writes about travel, food lifestyle and pet topics. She's also a seasoned social media/digital strategist with a journalism background. Linda loves exploring the world with her husband Mike, eating their way through cities, supporting local businesses, and photographing Instagrammable Walls. She is the founder of the Edmonton International Cat Festival and a fur-mom to two cats and two dogs.
PrevPreviousClicks of the Day: Thursday, December 29, 2011 Edition!
NextClicks of the Day: Wednesday, January 4, 2012 Edition!Next