“After a Global exclusive on the state of Edmonton’s ambulance system, the province has responded with the announcement of more than a dozen new staff. Minister Fred Horne told Global News Tuesday morning, that effective immediately there will be 2 more ambulances on the road. The province will also hire 17 new staff, including 5 paramedics and 12 Emergency Medical Technicians, (EMTs).”

“A University of Alberta student allegedly embezzled more than $27,000 from an undergraduate student association, says an email sent Monday to students in the university’s Faculty of Business.”

“The crackdown on file-sharing site Megaupload is expected to do little to reduce overall piracy of music, software and Hollywood movies, while potentially stifling emerging means of distributing content online.”

That’s really unfortunate. But I’m sure a lot of those kind of disasters are true for many areas of the Earth in the coming years. Lol not to be depressing or anything.

“Carbon emissions being pumped into the atmosphere by humans could delay the world’s next ice age by around 500,000, scientists claim.”

Among many things carbon emissions is affecting.

“On July 12, 2011, the scientists injected retinal cells derived from embryonic stem cells into the eyes of two patients suffering from progressive blindness, and the results announced Monday suggest that the treatment has changed their lives… the patients who received the therapy are doing well, showing no signs of adverse effects from the treatment and even reporting small improvements in their vision.”

“The male sex drive is to blame for most of the world’s conflicts from football hooliganism to religious disputes and, even, world wars, according to scientists. The “male warrior” instinct means that men are programed to be aggressive towards any-one they view as an outsider, a study says. In evolutionary terms, an instinct for violence against others helped early men improve their status and gain more access to mates, but in modern terms this can trans-late into large-scale wars.”

So the men are to blame… :P

“Could picky eaters actually be suffering from a mental illness? “Avoidant/restrictive food intake disorder,” or ARFID, is being recommended as a new eating disorder for the next edition of the Diagnostic and Statistical Manual of Mental Disorders, or DSM-5, an influential book used daily by doctors worldwide. ARFID is being defined as an “eating or feeding disturbance” that includes avoiding foods of a particular taste, texture or colour.”

Another reason why Mike should stop being so picky about eating his vegetables!!!

“Apple blew away already-high expectations with its first-quarter earnings results, buoyed by strong sales of the iPhone 4S and the iPad 2. In the first full fiscal quarter the company faced without its late co-founder, Steve Jobs, Apple posted a quarterly revenue of $46.33 billion and announced it had sold 37 million iPhones and 15 million iPads. Analysts had predicted iPhone sales of around 30 million and iPad sales at a more conservative 13 million.”

“Google is planning to rewrite its privacy policy to grant it explicit rights to “combine personal information” across multiple products and services, the company said today… It’s unclear exactly what Google can do with user data that it couldn’t do before. Google already can do some of this cross-pollination.”

More and more our privacy is invaded. But we obviously don’t care that much because we’ll still go on using Google and our accounts and the Internet as we do, lol.

“Google’s YouTube announced in a blog post that 60 hours of video is uploaded per minute, which is one hour for each second. Also, the video-sharing website receives more than four billion daily views. According to the latest studies, Canadian Internet users are hooked on YouTube. Data from comScore Inc. suggested that 88 percent of Canadians who use the Internet viewed a video online in one month. In that one month, Canadians viewed 3.1 billion videos.”

“Pinterest is one of the hottest websites around right now… Pinterest was the 60th most-visited website in the US last week, with total visits growing from 10 million to 17 million since the start of the year.”

It is an addicting site to be on. Have you checked mine out? I only have one board right now – wedding ideas!!

“A look back at the most memorable events and products from 1987.”

Including Star Trek The Next Generation sets off, RoboCop debuts, Apple registers its “Apple.com”, disposable contact lenses and more!

“The nominees for the 84th Annual Academy Awards have been announced, with Martin Scorsese’s Paris adventure “Hugo” leading the pack with 11 nominations.”

Ah the Academy Awards. The list of nominees always makes me feel the urge to watch all of these movies (but I rarely do, lol). Although I may watch Hugo. After all, that is also my nephew’s name! ;)

Lol! This cat defends its chicken from an alligator. Very brave!! Haha. 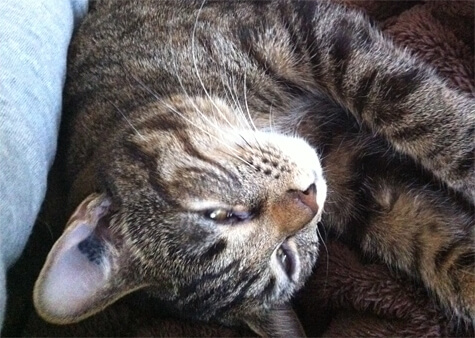 Linda Hoang is a Canadian blogger based in Edmonton, Alberta, who writes about travel, food lifestyle and pet topics. She's also a seasoned social media/digital strategist with a journalism background. Linda loves exploring the world with her husband Mike, eating their way through cities, supporting local businesses, and photographing Instagrammable Walls. She is the founder of the Edmonton International Cat Festival and a fur-mom to two cats and two dogs.
PrevPreviousClicks of the Day: Monday, January 23, 2012 Edition!
NextClicks of the Day: Thursday, January 26, 2012 Edition!Next