“Spruce Grove RCMP are releasing new information in the case of Jolene Cote, a school teacher who was killed in October… Cote’s family is now offering $50,000or information leading to the arrest and conviction of Cote’s killer, or killers.”

Sad. Hope they catch who did it.

“On Wednesday, city councillors heard from industry and the public safety compliance team as they debated banning booze at the events entirely… By meetings end, they reached a compromise – alcohol will continue to be sold at the parties, for now. “The community all came together to make sure that this didn’t happen,” adds Nguyen. “And now I think the community needs to come together and make sure that the events are safe.” The industry is being given just a few months to find those solutions.”

“Pope Benedict XVI is asking everyone to quiet down. In his annual communications message released Tuesday, Benedict extolled the sounds of silence. He said a little bit of quiet makes people better listeners and better communicators by giving them more time to think about what they are hearing and saying. And in a world inundated by Tweets and 24-hour news coverage, that precious time to think and reflect gives words greater value, he said.”

“The Conference Board of Canada says its monthly survey of consumer moods shows Canadians a little more upbeat about their finances this month… Last month, the index dropped to its lowest level in more than two years.”

Lol, let’s see how next month goes too.

“Apple employees will enjoy some healthy products discounts as thanks for the company’s recent blockbuster quarter. At an internal meeting yesterday, CEO Tim Cook announced that employees will soon be able to grab a $500 discount on the purchase of a new Mac and a $250 discount on a new iPad, revealed 9to5Mac.”

“It’s not game over for Nintendo, but as the company continues to suffer huge financial losses, a soon-to-be turnaround doesn’t look likely. Due largely to sluggish sales of Nintendo 3DS — a portable game console that projects 3D images without needing 3D glasses and accessories — a strong yen and consumer demand for Apple products such as the iPhone and iPad, the company reported major losses for the nine month period ending December 31, 2011.”

“Nintendo has finally confirmed its plans for the Nintendo Network, a formal, branded service for the Nintendo 3DS and Wii U… Personal Accounts for Wii U, Digitally Distributed Packaged Software, Paid Downloadable Content”

Hope it helps them!

“With tablets and smartphones generating so much buzz these days, it’s easy to write off the good old personal computer as a dying platform. However, the latest numbers from the NPD Group show that the PC market is doing “pretty well.” Last year, the number of PCs sold, which includes both laptops and desktops, increased by 20 percent, while revenues jumped 14 percent, according to the market watch group. Shipments for the period also increased by 20 percent.”

Keeps on truckin’ along. :) #IPreferMyMacBook+iMacThough

“Wireless bandwidth is like land in Manhattan — it’s extremely valuable because they’re not making more of it. But we sure are using more of it. The wireless-industry association CTIA reported in October 2011 that the number of wireless devices in the U.S. had, for the first time, exceeded the number of people… The result: Wireless networks are edging near capacity, not just in the United States, but all over the world.”

“Researchers have “cloaked” a three-dimensional object, making it invisible from all angles, for the first time. However, the demonstration works only for waves in the microwave region of the electromagnetic spectrum. It uses a shell of what are known as plasmonic materials; they present a “photo negative” of the object being cloaked, effectively cancelling it out.”

The Wonderful World of Harry Potter inches ever closer to reality!

“Publisher Geordie Wilson says readers ‘have made it abundantly clear that they want the print edition of their local paper on their doorstep seven days a week.'”

“The Daily Mail, an omniverous middle-market British tabloid, has quietly unseated the New York Times to become the newspaper with the biggest online reach in the world, according to figures from the online tracking service comScore.”

Lol. I admit I enjoy going to the site for the occasional “weird story” but it’s definitely not my first source for the news. (Apparently not the case for others lol)

“Dwight Schrute may finally be off to greener pastures… literally. I hear that NBC is working on an Office spinoff starring Rainn Wilson for a potential midseason 2013 launch.. It will have Dwight (Wilson) living at the Schrute family beet farm and bed & breakfast, which have been featured on the show several times, including in an episode where Jim and Pam visited Dwight there.”

“A 31-year-old Australian feels your pain, and he has built a website — www.wemetonaplane.com… According to Google stats, there are 4,400 searches for the phrase “met on a plane” every month. The new website works like this: users search for details such as flight number, date, origin and/or destination to see if any existing stories match their own. If not, they are invited to share their story on the site and on Twitter and Facebook. If you recognize a story you can reply, adding your own details and sharing your Facebook URL. It’s then up to the story poster to “friend” you. But not a dating site.”

“A video posted on YouTube appeared to show the amazing voyage of a Lego man sent into space on a homemade spacecraft by two Toronto students… Ultimately, he is seen holding a Canadian flag with the curvature of the Earth and the blackness of space in the background.”

SO funny! (and creepy, lol. But also a little cute). 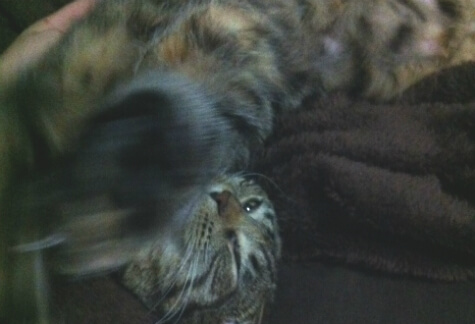 Linda Hoang is a Canadian blogger based in Edmonton, Alberta, who writes about travel, food, lifestyle and pet topics. She's also a seasoned social media/digital strategist with a journalism background, the founder of the Edmonton International Cat Festival and co-founder of Stop Race Based Hate, an online anti-racism education tool. Linda loves exploring the world with her partner Mike, eating their way through cities, supporting local businesses, and photographing Instagrammable Walls. Linda is a fur-mom to two cats and two dogs.
PrevPreviousClicks of the Day: Tuesday, January 24, 2012 Edition!
NextFeature Story: Edmonton philanthropists add more “awesome” to the world one idea at a timeNext