“A Calgary woman badly beaten in Mexico remains in a coma in a Mazatlan hospital, her family says… At some point in the night, Nabb emerged from her hotel room at the Hotel Riu and went to an elevator, said her uncle, Robert Prosser, from his Kingston, N.S. home. “She was brutally attacked. They found her in the elevator, laying there beaten quite bad. She was unconscious,” Prosser said… Medical staff put her in an induced coma. Bones in her face were shattered, her uncle said.”

“Hours before legendary football coach Joe Paterno died, some media outlets pounced on an early, inaccurate report and announced that he was dead. The incident highlighted the crucial clash in today’s hyper-competitive news environment: getting it fast versus getting it right.”

“What would you do if you ran a newspaper and half of your employees didn’t bother to read your product?”

Great discussion. I always tried to read whatever paper I worked for basically front to back (minus the sports and business section, lol. And by “read” typically it would be read the first couple of pages thoroughly and then skim the rest (skim headlines) unless the story intrigues me in some way). Same goes for the TV station. I always try and watch the casts on my days off and if I can get home in time after work. I like seeing the end result of a day’s work no matter how much or how little involvement I had in it. It’s good to know the style of the organization you work for too.

“What we will not do is endorse candidates. We have come to doubt the value of candidate endorsements by this newspaper or any newspaper, especially in a day when a multitude of information sources allow even a casual voter to be better informed than ever before.”

I never liked that news organizations endorsed candidates in the first place. Completely kicks the whole being unbiased thing in the butt, lol.

“The shake-up comes after Balsillie and Lazaridis showed little sign of being able to stop Silicon Valley powerhouses Apple and Google from gaining ground in remaking the mobile-computing market with devices such as the iPhone and iPad and the Android operating system.”

We’ll see if it helps, lol.

“In New York, State Senator Daniel L. Squadron and Assemblywoman Grace Meng are calling on Mayor Michael R. Bloomberg to declare the Lunar New Year a school holiday. The two, both Democrats, said the day was ‘the Asian community’s most important and greatest holiday.'”

I wholeheartedly am behind Lunar New Year being a school holiday! I’m also very happy that the New York Times is referring to the new year as Lunar – as it should be. Thank you NYT!! :)

“Air travellers who need to fly with an “emotional support animal” make it impossible for Air Canada to comply fully with a Canadian Transportation Agency ruling to ban cats in the cabin in some aircraft to accommodate customers with severe cat allergies, Canada’s largest airline says. In a recent submission to the government agency overseeing traveller complaints, Air Canada characterizes the situation as one of ‘conflicting ‘disabilities’ between a person with a disability by reason of their allergy to cats and a person with a disability having a cat as an emotional support animal.’

Interesting situation! (But more importantly, how cute is the photo of the cat in the travel bag?! lol).

“The strongest geomagnetic storm in more than six years was forecast to hit Earth’s magnetic field on Tuesday, and it could affect airline routes, power grids and satellites, the U.S. Space Weather Prediction Center said.”

“Still, as far as as news is concerned it was a strong result for Global Edmonton.” 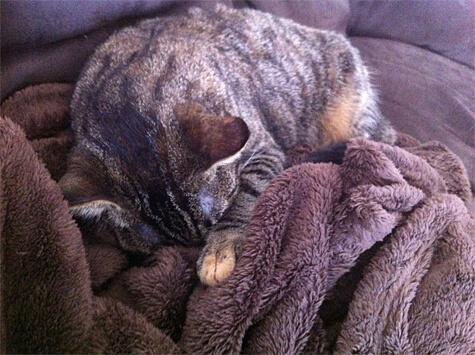 Sleeping and does not want to be disturbed :)

Linda Hoang is a Canadian blogger based in Edmonton, Alberta, who writes about travel, food lifestyle and pet topics. She's also a seasoned social media/digital strategist with a journalism background. Linda loves exploring the world with her husband Mike, eating their way through cities, supporting local businesses, and photographing Instagrammable Walls. She is the founder of the Edmonton International Cat Festival and a fur-mom to two cats and two dogs.
PrevPreviousClicks of the Day: Jan. 20, 21, 22 2012 Weekend Edition!
NextClicks of the Day: Tuesday, January 24, 2012 Edition!Next