“Greece’s financial crisis has made some families so desperate they are giving up the most precious thing of all – their children. One morning a few weeks before Christmas a kindergarten teacher in Athens found a note about one of her four-year-old pupils. ‘I will not be coming to pick up Anna today because I cannot afford to look after her,’ it read. ‘Please take good care of her. Sorry. Her mother.'”

Wow… this is crazy.

“A project is underway to revitalize a park and alley in downtown that has become underused.”

I’m sure Edmontonians will rise to the occasion :)

The restaurants are tapped to appear on an upcoming instalment of the Food Network show, You Gotta Eat Here.”

Cool! Article also highlights the Edmonton Dishcrawl as well. I had looked into organizing Edmonton’s first dishcrawl but decided not to because of the hours of commitment that had originally been proposed. Not sure if I could have committed :) I knew someone else would instantly jump in to organize though! First one’s already sold out.

“The country has been split on two controversial plans to construct oil pipelines through several provinces and into the United States. While supporters say the pipelines will create thousands of jobs as unemployment rates plummet, critics say the proposed plans could lead to mass oil spills and destruction of natural ecosystems.”

I’m on the side of the critics…

“Train riders validating their tickets at Edmonton’s Churchill LRT station will also have them scanned for explosive and radioactive materials this spring. Under a federally funded pilot project, ticket machines at the station will be modified to sniff out potential terrorist threats in a test of technology aimed at boosting safety for commuters without slowing them down with airport-style lineups.”

“Under the 10-point plan, the government will start work immediately to: reduce travel time for students who spend more than an hour on the school bus and add technology such as wireless Internet service so students can work during bus trips… launch a review of full-day kindergarten and how it could be implemented… offer more opportunity for students to earn post-secondary credits in high school” and more!

Those three sound most interesting in my eye. Let’s hope the plan gets implemented! ;)

“The province’s health authority is hoping to recruit more than 25,000 Albertans to participate in the long-term research study into the causes of cancer. A team of health workers set up a temporary clinic Tuesday in a northwest church to give locals the opportunity to join the Alberta Health Services study, which will track the health of almost 50,000 Albertans over the next half-century.”

I don’t make the age cut but if you do, could be interesting to be a part of!

“The annual 2012 International CES (Consumer Electronics Show) opens its doors to more than 150,000 attendees in Las Vegas this Tuesday.

This annual technology Mecca, much like a fashion show, will preview the newest and greatest gizmos and trends from giant TVs to HD movie-shooting wearable cameras and of course, all things Internet… Global’s tech guru Steve Makris is tweeting live from the annual Consumer Electronics Show in Las Vegas.”

“A full 46% of Americans think tablets will replace laptops in the future, according to a poll of 1,155 American adults. This is especially true among adults ages 30 to 64. Young adults (ages 18 to 29) and those older than 65 are a little more skeptical. Only roughly a third think that tablets will eventually eliminate the need for laptops.”

I don’t think they will!

“It seems technology companies are finally tuning in to that most basic of tech consumer problems: dropping devices in the toilet. Unveiled this week at CES, Liquipel is a clear coating that protects smartphones from dying in a watery grave. And if Liquipel can connect with enough smartphone vendors this week at CES, it could come with your next phone.”

Ah, technology of the future. I’m surprised there aren’t waterproof phones. (Or if there are, more widely-known ones?)

“Reddit, in protest of the Stop Online Piracy Act (SOPA), will be shutting down normal operations on Jan. 18 from 8 a.m. to 8 p.m. ET. During that window, visitors to the site will find a message about SOPA and its sister bill in the Senate, the Protect IP Act (PIPA). There will also be links which will provide more information about the two bills and suggestions on how to take action against SOPA and PIPA.”

“Ask Intel, ask any laptop manufacturer at this year’s CES what’s going on, and ultrabook is going to come up. It’s all anyone can talk about… So, what are ultrabooks, exactly? … Well, now it’s a thinner, sexier laptop, still under an inch, most likely using a lower-voltage, more power-efficient processor, maybe with graphics, maybe with a DVD drive. Maybe you want one, maybe you don’t.”

Whatever it is, I don’t think I want one, lol.

“According to the Associated Press, snowy owls are swooping into the States for a massive migration this winter.”

Lol, South Koreans have all the fun ;) Kind of slow starting off but pretty fun video! 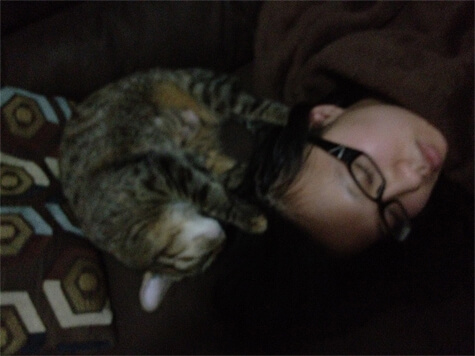 Mike took this photo when he got home today! Thor & me having the best nap on my day off, lol.

Linda Hoang is a Canadian blogger based in Edmonton, Alberta, who writes about travel, food, lifestyle and pet topics. She's also a seasoned social media/digital strategist with a journalism background, the founder of the Edmonton International Cat Festival and co-founder of Stop Race Based Hate, an online anti-racism education tool. Linda loves exploring the world with her partner Mike, eating their way through cities, supporting local businesses, and photographing Instagrammable Walls. Linda is a fur-mom to two cats and two dogs.
PrevPreviousClicks of the Day: Monday, January 9, 2012 Edition!
NextClicks of the Day: Wednesday, January 11, 2012 Edition!Next