“There was a time when each of the Big Three nightly newscasts on American television tended to open with the same story — the latest campaign speech, a new government study or perhaps a big snowstorm. That time is gone… Influenced by cable and the Internet, the nightly newscasts are shaking up conventions that stretch back 50 years, seeking to distinguish themselves by picking different stories and placing them in different orders.”

Great read on “defying the trends of network television” from the Big 3 in the States. Will we see this up in Canada?

“Employees at the 16 papers now owned by Halifax Media Group are being asked to sign an agreement that allows the company to fire them anytime but prevents them from working for media companies for two years in any other city with a Halifax property.”

Oy. That is terrible.

“At a TEDx event in Victoria, Canada, a social media researcher calls for everyone to take the “virtual” world seriously and stop apologizing for it. Too often, says Alexandra Samuel, we consider online speech, shopping, and other experiences as “something else that is less than reality.”

Really interesting speech! I admit I have video A.D.D. but I actually watched this 12 minute video in its entirety!! Online is not less than “in real life.” She says ‘“I have real conversations with friends, real emotions while looking at old pictures, and real laughs from funny videos or sites. What about this isn’t real?”’ So true!

“A “smart” internet-connected television that has the ability to have its hardware upgraded every year has been unveiled by Samsung… The innovation may help reassure shoppers concerned about their screen becoming outdated.”

Interesting. Expect a lot of new tech announcements over the next few days as the Consumer Electronics Show is happening this week! ;)

“A former pediatrics resident from the Stollery Children’s Hospital took his place in the prisoner’s box Monday to answer allegations he sexually assaulted two young boys.”

“Healthy people who take aspirin to prevent a heart attack or stroke could be doing more harm than good, warn researchers.”

I feel like this would fall under the duh category (but then again a lot of results from “studies” often do lol). But there you go.

“Hair grows back thicker when you shave it! Reading in dim light turns you blind! Peeing on a jellyfish sting will soothe the pain! The way our bodies work is a bit of a mystery, and our desire to unlock its secrets has led to a vast amount of misinformation. Many of these false notions are more widely believed than the truth. We took our healthy skepticism and a bunch of research to find the truth behind some of the most common myths about our bodies. Here’s what we learned…”

I love reading debunking articles, haha. Definitely interesting. I definitely thought a lot of the “myths” were true! I was wrong.

“When was the last time you checked your credit report? You may be surprised to learn how many of them contain errors. The trouble is, many people don’t find out about mistakes in their credit report until they apply for a loan or a mortgage.”

Good reminder to check! I haven’t… though I have no worries about a negative report. I pay all of my credit cards off in full each month ^_^

“The aquatics area at the Rec Centre will be closed for warranty maintenance work starting Monday.”

“Edmonton Transit hopes a music video it sponsored shot on a bus will show passengers that flats on city vehicles aren’t always a problem.”

“Developing countries like China and India will drive global sales of consumer electronics above $1 trillion this year for the first time, even as cash-strapped shoppers in the U.S. and Western Europe ease off spending for high-tech gear.”

Not surprising! Gadget-mongers, we are.

“It’s a rare day when Richard Drake turns down a dead body, but last week, he had no choice… Reluctantly, Drake informed the dead man’s family he’d have to turn down the donation request because their loved one exceeded the size limits for medical research.” 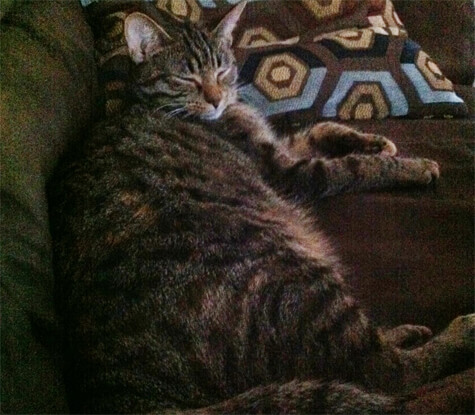 Thor looks very fat from this angle but I swear, it’s just the angle!

Linda Hoang is a Canadian blogger based in Edmonton, Alberta, who writes about travel, food, lifestyle and pet topics. She's also a seasoned social media/digital strategist with a journalism background, the founder of the Edmonton International Cat Festival and co-founder of Stop Race Based Hate, an online anti-racism education tool. Linda loves exploring the world with her partner Mike, eating their way through cities, supporting local businesses, and photographing Instagrammable Walls. Linda is a fur-mom to two cats and two dogs.
PrevPreviousClicks of the Day: Jan. 6, 7, 8 2012 Weekend Edition!
NextClicks of the Day: Tuesday, January 10, 2012 Edition!Next