“Montreal, Quebec, is the only North American city to make the New York Times’ recent list of the world’s hippest cities.”

“The software isn’t new, nobody told us about it, and more importantly nobody gave us a choice as to whether or not it was used.”

Really interesting. I first heard about this through this Global Toronto report. Ah well, I’ve said it before and I’ll say it again – there’s no such thing as privacy anymore.

“Selene Yeager, a certified personal trainer and author, says you can get something out of a 15-minute session on your couch.”

The sad thing is I am probably too lazy to even do this – lol.

“People will probably be looking you up and down trying to assess you. Don’t be worried, don’t be pumped up, don’t be wet, you’ll be okay. It gets easier and easier from this point on.”

Interesting read – and also so random, lol the things you can find online!

“The holidays are almost upon us, which means it’s time for you to take a careful look at your neighbor and report any and all suspicious activity to your immediate supervisor. At least it is at the New York Times, which just sent a memo to all staffers urging them snitch on any co-worker who may have engaged in any ‘potential ethical or legal violations.'”

“Starting in January, students at the Summit Christian Academy in Summit, Mo. will have to rewrite their papers if they have more than five errors — and they can’t score any higher than 75% on the second try.”

Not a bad idea.

“After arguments from the National Federation of Journalists (Fenaj in Portuguese) and similar journalist groups, senators approved a bill to amend the Constitution that requires practicing journalists to have an advanced degree on Nov. 30, reported G1. There were 65 votes in favor; seven against.”

Not cool. I’ve got a Journalism diploma, and a Television Broadcasting diploma. I’ve spent 4 years in post-secondary and have had experience in various newsrooms. I don’t think I’m any less qualified because I don’t have a “degree.”

“Nine-year-old Emanyea Lockett suffered a two-day suspension from Brookside Elementary School in Gastonia, North Carolina, after he told his friend that he thought his teacher was cute.”

Messed up. That kid should not have been suspended for that. Really.

Interesting to see what good/bad things these companies are doing.

“After a report on the trend of Santas this year being coached to manage little ones’ gift expectations, anchor Robin Robinson quipped that Santa wasn’t real, anyway… Viewers flooded the show’s feedback lines and Facebook page with outrage.”

“Scientists from Japan and Russia believe it may be possible to clone a mammoth after finding well-preserved bone marrow in a thigh bone recovered from permafrost soil in Siberia.”

Cool but I’m not sure if it’s a good idea… again with the God-playing, humans.

“Increasingly, online shoppers won’t complete their orders unless free shipping is part of the deal… Now, after an epic $52 billion shopping spree over Black Friday weekend, some of the effects of free shipping can be seen.”

So true. Free shipping is a huge draw for me.

“Pulling out a brightly lit smartphone to compose a tweet during a symphony or ballet is generally considered a faux paus of the highest order. But in some theaters, it’s a welcome activity — in designated seats, at least.”

They have designated tweet seats at a theatre in Fort Saskatchewan – I’m not sure how it would feel to see someone’s phone light in a dark room.

“Kodak Brownie and Instamatic cameras were once staples of family vacations and holidays — remember the “open me first” Christmas ad campaigns? But it may not be long before a generation of Americans grows up without ever having laid hands on a Kodak product. That’s a huge comedown for a brand that was once as globally familiar as Coca-Cola.” 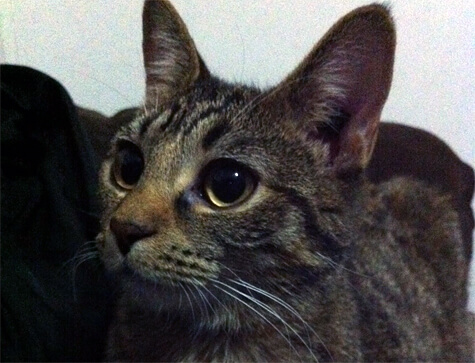 Linda Hoang is a Canadian blogger based in Edmonton, Alberta, who writes about travel, food lifestyle and pet topics. She's also a seasoned social media/digital strategist with a journalism background. Linda loves exploring the world with her husband Mike, eating their way through cities, supporting local businesses, and photographing Instagrammable Walls. She is the founder of the Edmonton International Cat Festival and a fur-mom to two cats and two dogs.
PrevPreviousClicks of the Day: Dec. 2, 3, 4 2011 Weekend Edition!
NextClicks of the Day: Tuesday, December 6, 2011 Edition!Next