“The death of North Korean dictator Kim Jong-il, the unpredictable and brutal ‘Dear Leader’ who menaced the region with nuclear weapons while haplessly letting more than 1-million of his people starve to death, leaves an unstable succession.”

Hope Kim Jong Il’s son is easier to deal with.

“Harper, commenting on the death of North Korean leader Kim Jong Il over the weekend, says he hopes Kim’s passing will bring positive change to the isolated country.”

“Rarely are the contrasts between CNN, the Fox News Channel and MSNBC as visible as they are on nights like Sunday, when the death of the North Korean dictator Kim Jong-il was reported.”

Always interesting to see how breaking news like that is covered – and with weekend staffing.

“The future of interactive journalism means that our role involves different ways of monitoring submissions to assure they adhere to ethical standards. James assures me that if we had asked him if the image was Photoshopped, he would have told us. Our role in policing content could be as simple as asking the right questions.”

Good lesson to be learned, especially with more citizen journalism and asking our audiences to contribute content.

Including “pay attention to your credit score, spend money on what matters, and making savings a habit.”

Happy to say that Mike and I are doing pretty well with all 8 of these. We still feel very poor though, lol. Life is tough.

“Americans will buy an estimated 1.5 billion holiday cards this year to send season’s greetings to loved ones. Ben Tracy takes a look at a company that is putting a new spin on the traditional holiday cards to send a different kind of message.”

I love SomeEcards!! :) So funny. Doesn’t make up for a real holiday card though.

“Even if Sunday was not always the developers’ chosen launch day, Mobilewalla found that apps released then statistically performed the best. That is, they made it into the list of the top 240 mobile applications.”

More people just hanging out at home browsing the app store on a Sunday I suppose!

“Soon you’ll be able to flick through channels and adjust the volume using only… your hand. You’ll just have to turn your palm towards the screen, and zap away without ever getting off the couch. And no need for under-the-skin electronics or fancy microchips. Instead, the TV – or rather gesture recognition software installed inside – will “read” your moves and execute appropriate commands, without any need for physically pressing any buttons.”

I doubt this will be perfected for 2012 sales but it’s definitely going to be in our future.

“Hairier skin may be the key to avoiding being bitten by bed bugs… researchers say the hair slows down the bed bugs and warns the victim.”

“Displaying the amount of time you’d need to jog in order to burn off the calories from a sugary drink, rather than showing a calorie count, may be more effective in dissuading you from consuming those beverages, new research suggests.”

“The last U.S. soldiers rolled out of Iraq across the border into neighbouring Kuwait at daybreak Sunday, whooping, fist bumping and hugging each other in a burst of joy and relief. Their convoy’s exit marked the end of a bitterly divisive war that raged for nearly nine years and left Iraq shattered and struggling to recover.”

“Most of the victims were asleep Friday night when flash floods cascaded down mountain slopes with logs and uprooted trees, swelling rivers and killing at least 652 people. The late-season tropical storm turned the worst-hit coastal cities of Cagayan de Oro and nearby Iligan into muddy wastelands filled with overturned cars and broken trees.”

So sad. We are at Mother Nature’s mercy.

“Protesters clashed with Egypt’s security forces in central Cairo on Sunday after the humiliating police beating of a veiled woman in Tahrir Square triggered widespread outrage in the country’s pro-democracy movement.”

So crazy what is happening around the world.

“Two Edmonton charities that help make the holidays a little brighter for families in need are falling short of their goals, with just a week left until Christmas.”

Ah, so sad. Everyone should have a happy Christmas.

“Electrical engineer Lisa Welburn spent countless hours over the past two years poring over spelling lessons and studying phonics to help her frustrated son learn to read and write. Now, with help from her computer-programmer husband, Craig Welburn, the 41-year-old mother of three has packaged that research as a new educational iPad app that is selling rapidly on iTunes.”

“It might seem like corporate heresy but an increasing number of technology investors and experts are asking whether Research in Motion needs to ditch its BlackBerry handset business to survive.”

“If teenagers are an indicator of tomorrow’s world—and they most certainly are—then the future is mobile. In a new Nielson study, teens, defined as 13 to 17, were found to have tripled—indeed, more than tripled—their mobile data usage over the past year.”

This entire story is insane… ridiculous really. At 21? Your life is not over if your girlfriend or boyfriend breaks up with you…

Great, great Homicide series by the Edmonton Journal. Articles are worth your read.

“A woman who had more than 1,100 rabbits seized from her home pleaded guilty to causing an animal distress on Monday, but a provincial court judge wants more information before deciding on her sentence.”

“Saudi billionaire Prince Alwaleed bin Talal, an investor in some of the world’s top companies, has bought a stake in Twitter for $300 million, gaining another foothold in the global media industry.”

“When most people think about bequeathing their belongings, it’s the obvious: the house, the car, bank accounts, the sentimental family mementos. But what about our online “stuff”? With so many of us emailing, blogging, tweeting, Facebooking, eBaying and otherwise living online, it’s clear that a huge portion of ourselves resides on the Web… when it comes to writing a will or a living trust, these so-called “digital assets” often get overlooked.”

“Do you want to kill a conversation? Try saying ‘whatever.’ Words like ‘you know’ and ‘like’ might be irritating to hear, but for the third year in a row, it’s ‘whatever’ that holds the most power to annoy.”

Lol, Mike hates it when I say whatever.

“A couple weeks ago, astronomers spotted black holes that were ten billion times more massive than our Sun, setting new records for the biggest black holes ever found. NASA has spotted another record-setting black hole, although it’s not quite as impressive… it’s probably only three times as massive as the Sun, which is dangerously close to the minimum amount of mass needed to create a black hole in the first place.”

“About 25,000 underprivileged kids will have a present to open on Christmas morning, thanks to the efforts of thousands of Santa’s helpers. Before the doors to the Santas Anonymous warehouse even opened on Saturday and Sunday, eager volunteers lined up outside, waiting to be given packages to deliver.”

“Anyone hoping to find something warm and fuzzy under the tree Christmas morning will have their hopes bolstered by a recent policy change at the Edmonton Humane Society, which is now encouraging the adoption of animals as gifts. The change reverses a long-standing policy that discouraged giving pets as gifts, in part due to fears that impulsive adoption decisions could lead to animals being returned to the shelter at a later date. However, Humane Society staff say new research counters that long-held belief.”

Good policy reversal I think! :) Everyone should have a pet to love. <3 But only if the pet is going to be a gift to someone who is ready to take care of a pet.

“Cats. They are why we do what we do — why we continue to persevere in the face of a fearful present and an uncertain future. But they are so much more than just the unheralded inspiration for our greatest accomplishments — for instance, they are also furry and they roll around on the floor a lot. Let’s take a look back at the most important ones from this year.”

The best page you could spend your lunch hour browsing through!!! Gosh I love cats. 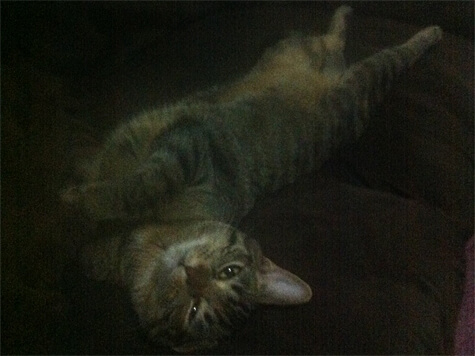 Linda Hoang is a Canadian blogger based in Edmonton, Alberta, who writes about travel, food, lifestyle and pet topics. She's also a seasoned social media/digital strategist with a journalism background, the founder of the Edmonton International Cat Festival and co-founder of Stop Race Based Hate, an online anti-racism education tool. Linda loves exploring the world with her partner Mike, eating their way through cities, supporting local businesses, and photographing Instagrammable Walls. Linda is a fur-mom to two cats and two dogs.
PrevPreviousClicks of the Day: Thursday, December 15, 2011 Edition!
NextClicks of the Day: Tuesday, December 20, 2011 Edition!Next