“Wikipedia may temporarily blank out its pages in self-sacrifice to draw attention to the controversial Stop Online Piracy Act. While the bill aims to protect copyrighted material, critics fear corporate manipulation could lead to greater censorship.. The bill is intended to crack down on websites operating outside of the United States. If passed, the legislation would allow the US government to shut down any site illegally hosting copyrighted content.”

“If you’re selling yourself in your professional profile as creative and effective — not to mention motivated — you have company. The professional online network LinkedIn says these are the most overused professional buzzwords among its more than four million members in Canada.”

I should spice up my resume a bit better. Although I haven’t used creative yet. And I’ve used ‘effectively’ not effective, lol.

“The National Transportation Safety Board is recommending that states ban the use of cell phones and other portable electronic devices while driving.”

“The Alberta government footed a $230,000 bill to play host to Prince William and his wife Catherine during the royal couple’s stopover in Calgary this summer.”

Whatever – we’re always paying something.

I hear ya, Canadians.

“‘If it gets too much, we pack up and move I guess. Mike and I talk about that sometimes. I don’t know … Toronto? Maybe Edmonton!'”

“Jean Chrétien is warning Liberals that gun control and the Kyoto accord are dead because of Stephen Harper’s Tories, darkly noting that same-sex marriage and abortion rights could be next on the Conservative government’s chopping block. He even raises the return of the death penalty as a possibility.”

“From the royal wedding to the death of Osama bin Laden, the English summer riots and the fall of Gaddafi, here are some of major news stories of the past 12 months created in Lego by Flickr members.”

“Facebook accounted for more than half of all content-sharing activity in 2011… The company’s sharing buttons are embedded on more than 11 million websites, giving it a pretty broad view of how content moves across the Internet.”

And a tumbleweed rolls past MySpace! lol.

“Imagine adding beautiful lighting to a photo after you took the picture. A camera developed at the Massachusetts Institute of Technology could get you there. But first, let’s talk speed: This one-of-a-kind camera can track the movement of individual packets of light, or photons, by capturing 1 trillion frames per second.”

Wowwee!! Probably not anything that is affordable, lol.

“Canadian scientists involved in the search for the so-called “God particle” say they have seen hints that it exists and are closer to a discovery that would not only help explain how the universe was created, but also open the door to technological advances we can’t even imagine.”

“It’s the kind of stuff that gives moms nightmares: a machete near a play area, household chemicals accessible to preschoolers, and instructors teaching without a criminal background check. These violations and others were found at Head Start centers across the country.”

“The BBC will announce on Tuesday a first-of-its-kind deal for Comcast to carry the BBC World News channel, opening the door to wider distribution for the channel within the United States. The carriage agreements come nearly a year after the BBC charted a new course for expansion in the United States, where it believes that viewers’ appetites for international news are not being satisfied by the likes of CNN, Fox News and MSNBC.”

Nothing wrong with more news options.

“The BBC has dismissed criticism that veteran nature broadcaster David Attenborough misled viewers over images of polar bear cubs featured in his hugely popular TV series “Frozen Planet”… Eight million viewers in Britain watched images of a polar bear caring for her newly born cubs in scenes shown on November 23 that were juxtaposed with pictures of an adult polar bear. The fact that the footage of the cubs was actually shot in a zoo in the Netherlands was only revealed in an accompanying video clip on the BBC’s website.”

“Facebook is making it easier for people who express suicidal thoughts on the social networking site to get help. A program launching Tuesday enables users to instantly connect with a crisis counselor from the National Suicide Prevention Lifeline through Facebook’s “chat” messaging system.”

“A probe of two local street gangs led to a massive cross-country organized crime raid and charges against at least 60 people… The raids focused largely on southern Ontario, including Toronto, London, Hamilton, Windsor, and the regions of Durham, York and Peel, but also extended to Calgary and Surrey, B.C.”

“The surprise proposal took place during one of Lee Thomas’s five-day forecasts on Augusta, Georgia news station WJBF, where squeaks of delight were heard before she’d even finished telling the audience what weather to expect on Saturday.”

Too cute! I love how there’s a camera change too, LOL. So cute. I would have been more like “Oh my god what are you doing here” instead of just “Hi” twice though, lol.

“More than three-quarters of Americans would blow the whistle on wrongdoing at their workplace, according to a newly released survey — but only if they could do so anonymously, without fear of reprisal, and — and this is a big “and” — there was a monetary reward involved.”

“Georgia Republic architect Irakli Kiziria has designed a Louis Vuitton condom, enveloped in the label’s notorious brown packaging and adorned with what looks like raised lettering (for enhanced pleasure, we can only assume). The luxury rubbers are priced at $68 each.”

“The emoticon was once our best method of conveying feelings in a digital space where facial expressions and inflection weren’t possible. Today, memes have made GIFs (or have GIFs made memes?) part of everyday communication, a much better way of expressing what was once digitally inexpressible.”

“A few months ago, Jimmy Kimmel challenged parents to video tape themselves telling their kids they ate all of their Halloween candy, well now he is at it again. This time he wanted parents to give their kids a Christmas present a little early, but to make it something that nobody would ever want.”

LOL so funny! Jimmy Kimmel is so underrated! :) 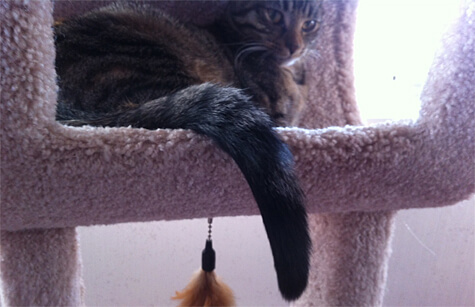 We always think it’s funny how the end of Thor’s tail looks like it’s been dipped in black paint, lol.

Linda Hoang is a Canadian blogger based in Edmonton, Alberta, who writes about travel, food, lifestyle and pet topics. She's also a seasoned social media/digital strategist with a journalism background, the founder of the Edmonton International Cat Festival and co-founder of Stop Race Based Hate, an online anti-racism education tool. Linda loves exploring the world with her partner Mike, eating their way through cities, supporting local businesses, and photographing Instagrammable Walls. Linda is a fur-mom to two cats and two dogs.
PrevPreviousClicks of the Day: Monday, December 12, 2011 Edition!
NextClicks of the Day: Wednesday, December 14, 2011 Edition!Next