“‘Phone finder’ apps exist for nearly all types of cell phones, including iPhones, Blackberries and Android devices. Once installed, the recovery apps use GPS to display the missing phone’s approximate location on a map. Some are free while others, generally with a more robust feature set, can be purchased.”

Fun story – will link Julie Matthews’ video report in tomorrow’s Clicks! I currently only have Find my Phone installed on my phone (access GPS location through iCloud). But there are some really cool apps out there!

“It’s the kind of pain that never goes away completely; an estimated four and a half million Canadians suffer from constant and chronic back pain.”

I wouldn’t define the feeling I get in my back as painful but I always find myself trying to squeeze my back shoulder blades together and I’ll never turn down a crack-back-hug from someone, lol.

“When it comes to being a mom, finding a balance between work and staying at home to raise a family could have significant health benefits… Moms with jobs reported feeling better overall than stay-at-home moms.”

I don’t think I could ever be a stay-at-home-mom who doesn’t have any odd jobs or projects, etc. I would love to – in the future – be able to spend as much as time as I could with my kids but I would always have to be working on some kind of freelance or part-time project at the same time.

“The regular cash fare for an adult to ride a city bus or LRT now is $2.85. That will increase to $3 on Feb. 1, a year ahead of the target in the six-year fare policy plan implemented by Edmonton Transit System in 2008.”

Man, as if everything isn’t expensive enough already…

“Edmonton could see a pilot program to test Internet voting in the next civic election, officials say. E-voting, which can include using phones, electronic ballots or the Internet, has occurred in more than 30 Ontario municipalities and four Nova Scotia jurisdictions. Several Alberta centres, including Edmonton, Calgary, St. Albert and Strathcona County, are interested in trying the new technology.”

The way of future elections. Bring it on!

“Calgarians are using tweets to tip each other off about check stop locations this holiday season; however, police are asking twitter users to stop.”

Shucks, it’s a shame this was done in Global Calgary before Global Edmonton. It was screaming to be done in Edmonton too lol. But it applies with either city – tweeting checkstops is bad. Don’t do it.

“A 19-year-old US pick-up truck driver involved in a deadly US highway pile-up last year sent or received 11 texts in the 11 minutes immediately before the accident, investigators say.”

“Back in 1960 in the US, 72% of adults aged 18 and above were married. Today, a Pew Research Institute study finds that the figure is 51%, and falling. Instead of marrying, people are cohabiting, living alone, or single parenting.”

Aw, I love marriages and weddings. I am co-habiting right now but I definitely want to get married (when we can afford it lol).

“The news magazine cited dissent across the Middle East that has spread to Europe and the United States and said these protesters are reshaping global politics.”

I would say that ‘protesters’ definitely meets the ‘Person of the Year’ criteria. (“influenced the culture and the news during the past year, for good or for ill”).

“It’s no surprise that black holes are basically celestial Cookie Monsters, gobbling anything and everything in sight. But because that appetite includes light itself, it’s incredibly rare for us to actually see a black hole suck back an interstellar treat. Astronomers using the European Southern Observatory’s Very Large Telescope have found just that: a mysterious, giant gas cloud that’s rapidly been pulled into the maw of a supermassive black hole.”

I can’t really tell in the video but pretty cool nonetheless. Black holes are fascinating.

“The faux-baby bump has now, apparently, become a hot trend in China – for actors, pranksters and even as a ‘fashion accessory.’ We can see the benefits: Why bother with an actual baby when you can get those handy mommy-to-be parking spots or the last seat on the crowded bus, or just those aw-shucks glances, with a piece of plastic strapped to your belly?”

“Majel is an evolution of Google’s Voice Actions that is currently available on most Android phones with the addition of natural language processing. Where Voice Actions required you to issue specific commands like “send text to…” or “navigate to…”, Majel will allow you to perform actions in your natural language similar to how Siri functions.”

“Today, Christmas shopping for most of us means going online or driving out to a mall. But not too long ago, it was a different kind of experience… or a century, department stores — real department stores, the ones built by local families, that dominated city centers and could take up entire blocks — ruled downtowns the way they ruled the holiday season.”

“Because they’re cheap and colourful, and people like watching things fly away.”

“‘People who own Kindles are just reading different books than the people who buy printed books,’ reports the Kindle site, which adds ‘2011 may be remembered as the year that hundreds of new voices finally found their audiences.'”

“Comedian Louis CK has announced some numbers related to his recent experiment to sell his latest comedy special, Live at the Beacon Theater, for $5 online, instead of offering it through a distributor. In the post, he says that the special, which went on sale, Saturday, December 10th, had sold 50,000 ‘units’ and earned $250k, covering the production costs. As of today, 110k copies had been sold, for a total intake of over $500k, bringing him a profit of $200k so far.”

Sweet. No need for a middle man…

“Some highlights include… “average attention span at present is just 5 seconds long (10 years ago it was 12 minutes), people spend 700 billion minutes on Facebook every month, More activity is seen in the problem-solving and decision-making areas of the brain than in those who don’t use Internet” and more!”

Ah the impacts of social media. Gotta love it, lol.

“According to a new study by a group of Saskatchewan hospital doctors, it takes twice as long — 37.5 seconds — to get to a designated floor by elevator versus the stairs. The difference was almost entirely due to the time spent waiting for the elevator to arrive… Overall, taking the stairs over the elevator saved about 15 minutes each day — about a three per cent time savings in a typical, eight-hour work day.”

“Demanding Mekeeda Austin, 13, warned Father Christmas that he will be ‘killed’ if he fails to deliver at least two of her long list of lavish gifts.”

“Sushi lovers wondering about mercury levels in fish can now search for those levels with the new “Safe Sushi” smartphone app, thanks to the largest environmental advocacy group in the U.S.”

Pretty neat! :) I am never worried about mercury levels in my raw fish though, lol. Yum… raw fish.

“One in every six species related to characters in the movie Finding Nemo is threatened by extinction, according to a new study out today. The authors examined the extinction risk of 1,568 species within 16 families of well-known marine animals represented in the 2003 Academy Award-winning animated film.”

How depressing is that! :(

“The “leaproach” is a cockroach capable of sailing short distances through the air and landing, possibly, on your face.”

This makes me shudder. A lot. Gross.

“An adorable widdle home invader broke into Annette Swoffer’s New Zealand domicile this weekend. It was a “really friendly” baby seal, and it came through the cat door.”

“The first Angry Birds activity parks are going to launch next year, featuring slides and rope swings based on the hugely popular app.” 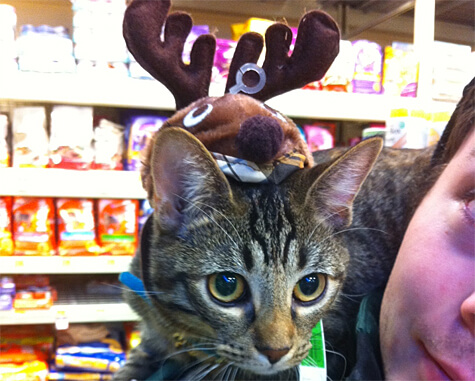 Linda Hoang is a Canadian blogger based in Edmonton, Alberta, who writes about travel, food, lifestyle and pet topics. She's also a seasoned social media/digital strategist with a journalism background, the founder of the Edmonton International Cat Festival and co-founder of Stop Race Based Hate, an online anti-racism education tool. Linda loves exploring the world with her partner Mike, eating their way through cities, supporting local businesses, and photographing Instagrammable Walls. Linda is a fur-mom to two cats and two dogs.
PrevPreviousClicks of the Day: Tuesday, December 13, 2011 Edition!
NextClicks of the Day: Thursday, December 15, 2011 Edition!Next