“Situated on an area of around 100 acres, and 45 minutes drive from the center of Beijing, are the ruins of ‘Wonderland’. Construction stopped more than a decade ago, with developers promoting it as ‘the largest amusement park in Asia’. Funds were withdrawn due to disagreements over property prices with the local government and farmers. So what is left are the skeletal remains of a palace, a castle, and the steel beams of what could have been an indoor playground in the middle of a corn field.”

Photos give me goosebumps! What a waste.

“This is the proposed design for two skyscrapers in Seoul, South Korea. But MVRDV, the Dutch firm that proposed the design, is the subject of vitriolic criticism. Americans see too much of a reflection of this image: (twin towers under attack)”

People are too sensitive.

“Often, people with distorted thinking commit suicide because they see no other options. If the media present alternatives in their stories on this subject, it stands to reason that the likelihood of people killing themselves will go down.”

Interesting read. I also didn’t realize that the taboo on reporting suicides was melting away.

“The University of Kansas is buying up website names such as www.KUgirls.xxx and www.KUnurses.xxx. But not because it’s planning a Hot Babes of Kansas site or an X-rated gallery of the Nude Girls of the Land of Aaahs. Instead, the university and countless other schools and businesses are rushing to prevent their good names from falling into the hands of the pornography industry.”

“Taking the top spot for iPhone “App of the Year” is the free photo-sharing app, Instagram. Not only do Instagram’s many photo filters and effects make it nearly impossible to take a bad photo, it is also one of the world’s fastest-growing social networks.”

“This is some must see news footage of some amazing bullshit happening, they even have an old man witness.”

“Most of the suggestions listed here – like the corn fritters, spiced nuts, salmon carpaccio and eggplant dip – are quick hits I’ve been making at home for years. Others are inspired by the delicious bites I’ve eaten standing up at Spanish tapas counters or Italian wine bars with a glass of red wine in the other hand”

Many of these sound deeeelicious!!! Will need to figure out which I want to try for my family dinner on Tuesday!!

This was apparently a huge deal – lol for a non-sports fan like me, I didn’t really care but I suppose it does say something about his fame since he was recognizable to me!

“‘I think 2012 will provide Canadian consumers with a welcome break,’ … food prices have been on the upswing in recent years as input costs have surged, including for fuel used to transport goods and for commodities generally. Canadians are expected to get “a welcome break” at the supermarket cash register next year as the rise in food prices slows.”

“For all those air travellers bound for U.S. destinations who are tired of inching through security and customs, waiting in drab and cramped holding areas, the Edmonton International Airport sent a message Monday: Just wait until next year for dramatic improvements in comfort, efficiency and appearance.”

Yay! Because it really was drab before, that’s for sure.

“One of the most effective ways to maintain or lose body weight is to engage in regular, sustained aerobic activity (*).To burn off those extra calories, kick up your exercise. Making sure you eat seven or more servings of fruits and vegetables each day is a great way to help fill-up your stomach but not your calorie level.”

Good tips but so hard for me to achieve, lol.

“It’s estimated one out of every six gift cards sold is never used… a lucrative business is booming thanks to recipients who can’t or don’t use them.”

“There was mixed reaction from Canadian Muslim groups to news Monday that prospective Canadians can no longer wear veils, like the Islamic niqab or the face-shielding burka, while taking the oath of citizenship.”

Hm. I don’t think the government should be able to make that decision.

“When the economy took a nose dive in 2008, companies of all sizes slashed “extras” like the office party budget. As a result, 2009 came in as the slowest year in decades for event planners and venue bookings… The corporate Christmas party is back this season after a three-year lull in corporate cheer.”

I only really just got into working somewhere long enough for a Christmas party to roll around so I’ve never experienced the lull before! I must say last year and this year’s work Christmas parties I’ve attended have been wonderful! :) Glad it’s not on the chopping block anymore.

“Employers in Edmonton lead the country in their bullish outlook on hiring in the next three months, says a survey released Monday by a global human resources firm.”

“Albertans are waiting twice as long for surgery as they did less than two decades ago and facing greater treatment delays than most patients in the country, despite living in a province where the government spends more than most on health care.”

“The bromance between Pedro and Buddy, the potentially homosexual African penguins that made headlines last month when Toronto Zoo keepers said they would be split up for reproductive purposes, has come to an end. Less than 72 hours after the union ended, Buddy successfully paired with female Farai on Nov. 19.”

“According to language experts, Twitter and Facebook are not only increasing the speed at which new words spread but also the emotional investment people have in their usage.”

It was bound to happen! Should be great for students of the future.

“A wildly-coloured gecko, a fish that looks like a gherkin, and a monkey with an Elvis-like hairstyle are among the more than 200 new species discovered in the Greater Mekong region last year, environmental group WWF has said.”

Great news!! You always just hear about species dying off…

“A shrimplike superpredator of the ancient seas may have had more than 30,000 lenses in each eye, granting the animal enhanced vision that would have rivaled or exceeded that of living insects and crustaceans, a new study says.”

This is so cool.

“It could take as little as five years for television as we know it — broadcast and cable — to enter its final death throes, according to census statistics and a recent report from analysts… The culprit: young people and new households who just aren’t interested in signing up for paid cable and satellite TV service.”

Hm, very interesting. I think 5 years from death of television is too bold a prediction though. If that’s the way it’s going maybe give it 10 years, 5 will just creep up way too fast!

“A cute little baby panda falls on his face, walks it off like a champ.”

Awwww.
Thor Photo of the Day: 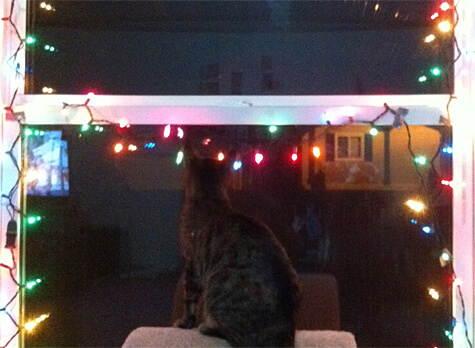 Linda Hoang is a Canadian blogger based in Edmonton, Alberta, who writes about travel, food lifestyle and pet topics. She's also a seasoned social media/digital strategist with a journalism background. Linda loves exploring the world with her husband Mike, eating their way through cities, supporting local businesses, and photographing Instagrammable Walls. She is the founder of the Edmonton International Cat Festival and a fur-mom to two cats and two dogs.
PrevPreviousRecap: Volunteering for Santa’s Anonymous!
NextClicks of the Day: Tuesday, December 13, 2011 Edition!Next