Welcome to Thursday, November 4 2011’s Clicks of the Day!

“The 54-year-old icon will grow a mustache for the Movember initiative, which supports funding for prostate cancer. Mr. Clean’s ‘stache will grow in accordance with the number of Likes he gets, as measured by a “Stache-O-Meter” on his Facebook Page.”

“Colgate-Palmolive is recalling a battery-operated electric toothbrush after receiving reports the devices exploded in the hands of some users… Freelance scriptwriter Jack Ruttan was brushing his teeth before bed one night last March when his electric toothbrush exploded.”

I have an electric toothbrush but I’m not sure what brand it is, but this sounds quite frightening!!

“Our main motivation for marrying isn’t just love, even if we don’t admit it. So we should stop pretending that it is.”

I find this to be a really jaded column, lol. I will marry for love. And I’m certainly not marrying for money (LOL sorry to take a stab at your income Mike). And we both aren’t really high up on the social status ladder so I say that’s out for reasons to marry as well!

“A flashy exhibition takes the release of a new font to the next level.”

“My thought was that every time you go back and change something, you create an alternate timeline. There are these guardians who stand watch over all the time portals, because they understand that whenever you go back, you damage the time-space continuum.”

“A new sensor records thousands of colors, many invisible to the eye, and detects environmental hazards and contaminants in real time, Israeli researchers say.”

“Safari’s hold on 62.17 per cent of mobile traffic has reduced IE’s overall share of web browsing.”

“Siri is tremendously under-valued. People see it as it is today, which is already the best voice recognition application in history. But people (including high-priced sell-side Wall Street analysts) fail to see where the puck is going for Siri.”

“A popular fashion trend among young couples in China — sporting the same wardrobe wherever they go.”

“50 percent of those surveyed also supported a law requiring women to take their husband’s name.”

I wouldn’t go so far as saying it should be a law.

“To get a sense of the impact of social media on conference presentations, I interviewed a bunch of regulars on the social media circuit. In the process, they helped me identify these seven (somewhat snarky) new rules for public speaking in the social media era.”

Good notes. Not that I frequently present but will sure keep this around to look at for any (if at all) future presentations I do.

“Continuing his satirical coverage of the Occupy Wall Street movement and its message of the 99% vs. 1%, Stephen Colbert offered a bold new solution to income inequality: the poor should become rich people’s pets.”

Unfortunately the video doesn’t work for Canadians (SO LAME) – but I will watch this on TV tonight. (We PVR Colbert in HD and watch it the next day, lol). Love him and his ideas, hehe.

“Comedian and late-night talk show host Jimmy Kimmel issued a bold challenge to parents: Tell your children you ate all of their Halloween candy. And record the response.”

“US space agency (Nasa) researchers expect the eventual berg to cover about 880 sq km – an area the size of Berlin. It should break away towards the end of the year or early in 2012.”

Crazy! Will be interesting to see what environmental effects it has! (Hopefully positive).

“The Associated Press has added a new entry on retweeting to its social media guidelines. Staffers are reminded to keep their opinions to themselves.”

“‘I’d rather drink bleach than listen to Nickelback and have them associated with Detroit,’ wrote one petitioner.”

Hilarious. (Nickelback annoys me too lol).

“A lot more Canadians than ever before are complaining about telecom services to a four-year-old watchdog agency set up to mediate between consumers and the industry. The commissioner for complaints to telecommunications services says complaints jumped by 114 per cent in 2010-11 over the previous year, to more than 8,000.”

Everyone is so complain-y lately.

“The Grammy-winning singer announced Wednesday that she is launching the Born This Way Foundation, a nonprofit focusing on youth empowerment and ‘issues like self-confidence, well-being, anti-bullying, mentoring and career development.'”

“Recent high-school graduates are exceptionally optimistic about their financial futures, with most expecting they will have an annual salary of $70,000 within 10 years and will have purchased their own home.”

TIME FOR A REALITY CHECK PEOPLE.

“Premier Alison Redford says the province will take another look at its $9.40 minimum hourly wage, the lowest among provinces.”

Everyone should just have as much money as they need and there should be no such thing as inflation lol. #inaperfectworld

“A New York man is suing the photography studio he hired to document his wedding in 2003 because he says they didn’t shoot the last 15 minutes of the reception, leaving out the last dance and the bouquet toss.” 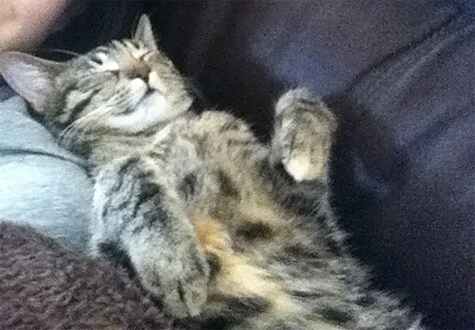 She sleeps in the darndest ways.

Linda Hoang is a Canadian blogger based in Edmonton, Alberta, who writes about travel, food lifestyle and pet topics. She's also a seasoned social media/digital strategist with a journalism background. Linda loves exploring the world with her husband Mike, eating their way through cities, supporting local businesses, and photographing Instagrammable Walls. She is the founder of the Edmonton International Cat Festival and a fur-mom to two cats and two dogs.
PrevPreviousClicks of the Day: Wednesday, November 2, 2011 Edition!
NextClicks of the Day: Nov 4, 5, 6 2011 Weekend Edition!Next