Welcome to Wednesday, November 2 2011’s Clicks of the Day!

“The most popular mobile game in history now has been downloaded more than 500,000,000 times.”

Lol, I’d rather not do this myself.

“Starting at $2 a cup, Tim Hortons, which has wanted to enter the espresso market for a number of years, says it’s taking a previously premium product and making it more mainstream.”

This affects me none as I do not drink coffee but well done breaking into the espresso market Timmies!

“The doctor is nearing perfection of a method he’s been working on for 10 years, which would allow brown-eyed people to change the color of their irises to blue.”

I don’t think we should be messing with eye colour. Ugh, so annoying how meddling some ‘researchers’ are.

“Alberta’s transportation minister says a new provincial drunk-driving law would be broader than the B.C. model and could ultimately wield a bigger stick.”

Including changes to the graduated drivers’ license – which I am still on and haven’t re-tested to get out of, lol.

“The Air Force is working on a new line of miniature espionage drones designed to look — and move — like birds, bugs, and other flying creatures.”

“Lives have been saved, small businesses have avoided shutting their doors and average folks have met their political leaders, sports heroes and other celebrities. All because of Twitter. That’s the story the micro-blogging service wants to tell with Twitter Stories, a new site meant to showcase what Twitter calls the power of a single tweet. Because while good stories can begin with a tweet, most can’t be told in 140 characters.”

“This infographic shows you how to manage your “e-reputation,” perhaps saving you some embarrassment, or even your career.”

Be smart about your online presence, people.

“There are some people who believe that being without Facebook means being without themselves. These people are, therefore, shaking at their sinews this week, fearing Saturday’s potential disaster.”

It’ll definitely be interesting to see if it happens.

“BlackBerry maker Research in Motion’s stock fell below its book value Wednesday for the first time in nine years, a sign that investors consider the company to be worth less than the net value of its property, patents and other assets.”

“The design tells two stories: One, about the underlying technology. And another about the act of taking a photograph. “We wanted to make it as simple as possible, while creating a form that truly represented a leap in photography.”

Such an interesting camera. Would love to get my hands on one!

“The central banker outlined a number of potential factors that explain why prices haven’t caught up with moves in the currency. They include: higher taxes, higher labour costs, higher transportation costs – in part because of a smaller, more widely dispersed population – differences in inventory levels and a more concentrated sector on this side of the border that reduces competitive pressure to cut prices.”

Life is so expensive.

“An Edmonton comic who could always be counted on for a laugh is being remembered fondly by friends and family.” 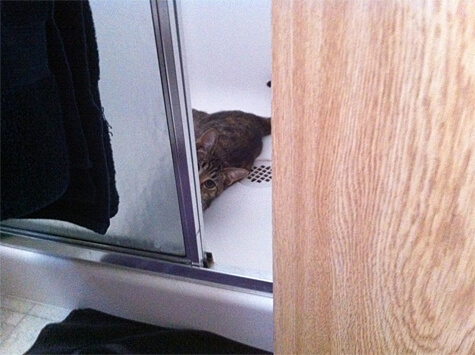 Lol, what are you doing in there Thor?!

Linda Hoang is a Canadian blogger based in Edmonton, Alberta, who writes about travel, food lifestyle and pet topics. She's also a seasoned social media/digital strategist with a journalism background. Linda loves exploring the world with her husband Mike, eating their way through cities, supporting local businesses, and photographing Instagrammable Walls. She is the founder of the Edmonton International Cat Festival and a fur-mom to two cats and two dogs.
PrevPreviousClicks of the Day: Tuesday, November 1, 2011 Edition!
NextClicks of the Day: Thursday, November 3, 2011 Edition!Next