“It’s disturbingly nostalgic. I mean, who cares if it survives? Who cares if radio survives? Like, something else will happen.”

Interesting read (and listen if you listen to the audio of the exchange, lol). Ah the future of radio.

“Walmart is known as a “big box” store but inside Walmart’s newest experiment, there is a hardly room for any big boxes. “Walmart.com” opened on November 1 in a San Diego mall.”

“Italian archaeologists say the man and woman were buried at the same time between the 5th and 6th century A.D. in central-northern Italy. Wearing a bronze ring, the woman is positioned so she appears to be gazing at her male partner.”

Not really surprising about Facebook. Crazy high percentages though especially when compared to its runner-up LinkedIn.

So the aliens are having a party in the core of Mars! ;D

“The social influence measuring tool studied the impact of a tweet over time, based on a user’s Klout score. Specifically, the company wanted to know how many retweets different types of users garner and how much time it takes before those retweets cut in half — or the half-life of a tweet.”

“Sometimes even owning the largest -50 degree Fahrenheit freezer in North America and having 4.5 million likes on your Facebook page isn’t enough to save you.”

Sad! I didn’t buy Dippin’ Dots often (because isn’t there only the ripoff version here in Canada? Well either way, I tried it when I was in the States) but I thought the concept was great!

“To ensure that the company’s new, translucent blue iMacs would be widely available at Christmas the following year, Jobs paid $50 million to buy up all the available holiday air freight space, says John Martin, a logistics executive who worked with Jobs to arrange the flights. The move handicapped rivals such as Compaq that later wanted to book air transport.”

Hilarious (and extremely business smart, lol). They are #1 for a reason :-)

“Apple reportedly has strict rules about posting any negative comments on any social media sites in order to protect its commercial reputation. So the company fired Crisp for gross misconduct, according to the report.”

That sucks. But you should never say anything bad about the company you work for on a social network. That should be well-known by now.

“You have to hand it to Google. With one fun little trick that a single engineer probably came up with in his mandated 20% spare time — getting the screen to “do a barrel roll” — the company got enough free media to make a chief marketing officer weep.”

“A new survey suggests Canadians are hoping to spend less this holiday season and will take more time going from store to store and scouring the web for deals.”

Lol, I feel like this would apply for every holiday season, not just “this” one. Mike and I will be on a very tight budget :(

“It’s believed that 54,000 jobs were lost across Canada last month, leading to the largest employment decline since the recession… behind Saskatchewan, Alberta’s unemployment rate is the lowest in the country.”

“The new species—dubbed Cronopio dentiacutus for its narrow snout and long fangs—was about 8 to 9 inches (20 to 23 centimeters) long and likely used its pointy teeth to hunt and eat insects.”

How cool is that! Love the illustration too.

“A Dutch graphic artist claims he’s created a font that can make reading easier on dyslexics. Christian Boer, diagnosed with dyslexia himself when he was 4, thinks the pot-bellied “b” and the barrel-chested “d” in Dyslexie, the font he designed, helps people with his learning disability read better.”

“A lot of people think crossbows are pretty cool. Lasers, miniaturized things, and wearable devices also tend to rate pretty high on the neat-o-meter. It goes to follow, therefore, that a small wrist-mounted laser-sighted crossbow should have a lot of admirers.”

Lol. It is pretty cool.

“If you can’t beat a game and have extreme carpentry skills, then why not recreate a real-life version of your favorite weapon from the series?”

“We asked our nutritionists back to debunk some more common misconceptions about food, health, and nutrition that are still widely believed, even though there’s overwhelming evidence to the contrary.”

Eep. Myth #5 about pregnant women avoiding eating sushi! If it’s not true then I will be so happy because when I found out that pregnant women have to avoid raw fish I was devastated. Not that I am pregnant but I LOVE raw fish and could not imagine going a year without it!!!

“The Internet’s most popular — and powerful — search engine will soon expand its search index to include user comments on Facebook as part of Google’s traditional search results.”

“Times are changing: As women out-perform men fewer can find the ideal husband.”

“At least 51 people were injured and at least seven were killed in a horrific car accident in England on Friday night — a pileup authorities are calling one of the worst in recent history.”

The footage showing this was crazy – complete carnage.

“The Pennsylvania law requiring some school officials and others to report suspected child abuse does not apply to a Penn State administrator who’s accused of keeping quiet about allegations that a former football coach molested a boy in a shower …The charge is part of a broader case centered on retired Penn State defensive coordinator Jerry Sandusky, who is accused of sexually abusing eight boys over 15 years.”

If it’s true then – disgusting. Especially because reports say Sandusky met those boys through a charity for at-risk kids that he was involved with. Disgusting.

Interesting. It will be cool to read about the Occupy movement in the history books in the future. Wonder what the outcome will be.

“It started as a Facebook event page on Tuesday, and now it’s grown into a national movement… Bank Transfer Day (BTD) is a deadline activists set for transferring funds from for-profit banking institutions into not-for-profit credit unions closer to home.”

“The demonstration is the latest in a series of White House protests aimed at convincing U.S. President Barack Obama to block the $7 billion project that would carry Alberta oilsands crude through six American states to Gulf Coast refineries.”

I think it’s a bad idea. And the one that’s being planned to go through B.C.’s coast. One spill and the damage would be astronomical. Not worth it…

“Several agencies teamed up for this project, to ‘allow people to observe the natural world we live in with the hope that they’ll develop emotional connections with the planet.'”

Save the polar bears <3

“Does what ever a spider-cat can.”

LOL. I wish this was longer.

“Ginger the kitten squeezes herself into a tissue box so tight, it would give Maru pause.”

“The only way to get the milk out of the bottle is by attacking it.”

If the above two weren’t enough of a cat video fix for your day, this one will get you there. Hehe. So cute!!! 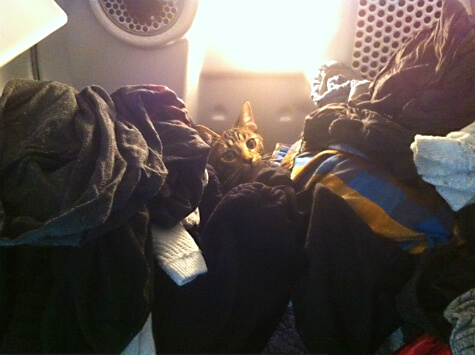 I was putting clothes in the dryer and look who decides to jump in. (Note: all pet owners should ALWAYS double check their washer/dryers before for sneaky pets before starting it).

Linda Hoang is a Canadian blogger based in Edmonton, Alberta, who writes about travel, food lifestyle and pet topics. She's also a seasoned social media/digital strategist with a journalism background. Linda loves exploring the world with her husband Mike, eating their way through cities, supporting local businesses, and photographing Instagrammable Walls. She is the founder of the Edmonton International Cat Festival and a fur-mom to two cats and two dogs.
PrevPreviousClicks of the Day: Thursday, November 3, 2011 Edition!
NextClicks of the Day: Monday, November 7, 2011 Edition!Next