This site is amazing, lol. The most detailed fashion information about Kate Middleton that you’d ever want to know and more! She is so pretty.

Funny. Let the stereotypes die now! But let’s face it – we are all terrible drivers at some point.

More steps in world domination! But seriously – I have been invited by 2 people for Google+ and the fricken site is too overcapacitated for me to access. Wah.

And with Google’s steps towards domination, so too must Facebook compete.

Cool I suppose but I am always “offline” on Facebook Chat anyway! More world domination:

I’m ashamed to say I only got 48% on the test to see if I fail. I do. So surprising though I thought I knew most of those for sure…

No surprise humans are the biggest killers. Poor sharks (and world).

Teehee. I love her!

Very neat… “The online company (The Newspaper Club) — now more of a cottage industry than a members-only club — bills itself as a place to “help people make their own newspapers.” Users can upload PDFs of their own designs or use a custom web publishing tool to design and create their own papers on the club’s website.”

From drunk dialing to drunk texting… drunk puppy buying appears to be so popular that it’s now being banned? lol.

And to celebrate, it should close down. I always wonder ‘WHY?!’ when someone tells me they’re using hotmail as their email client. Gag.

That’s very impressive. But “That was the good news. Now here’s the bad news: In the place of all those spam networks, there’s a new superbug emerging called TDL-4, and it’s smart enough to remove all the other malware from PCs as it takes over, replacing dozens of viruses with itself.” Though that’s talking strictly PCs. Macs appear to remain untouched. MUAHAHA.

Will believe it when I see it lol

Nice. Montreal comes in second. Would like to visit Quebec again sometime soon (especially now that I have actual ties there via Global Montreal). I had visited Montreal for a few hours a few years ago during a road trip but definitely didn’t get to explore the city/do that part of the trip justice. Edmonton rounds out list of least affordable cities to live. Unfortunate.

The future of photography, I tell ya. Lol just kidding. But it definitely is being taken more seriously as a photographic/video tool.

“The chief engineer of the world’s longest sea-bridge, in China, has denied claims that its construction was rushed to allow it to open on schedule.” Uh oh.

Can anyone say, planet of the apes!

What child since Harry Potter came out hasn’t hoped for a letter from Hogwarts? lol

Do all the world’s deadliest creatures live in Australia?! Geez!

What is the point of this? lol

I can’t believe the final movie is SO SOON!!! Eep. I don’t even have my advance tickets ordered. Or my Gryffindor scarf. So much to do, so little time!

California is next on the royals’ “vacation” Hope they get some time to soak up the sun! 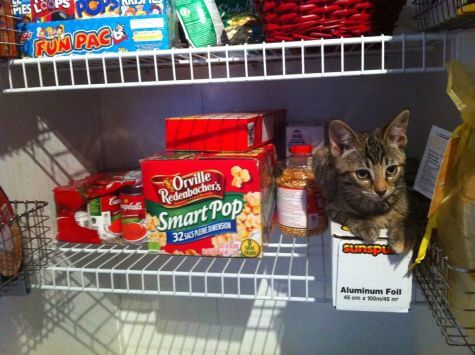 Silly cat, you do not belong in the pantry!

Linda Hoang is a Canadian blogger based in Edmonton, Alberta, who writes about travel, food, lifestyle and pet topics. She's also a seasoned social media/digital strategist with a journalism background, the founder of the Edmonton International Cat Festival and co-founder of Stop Race Based Hate, an online anti-racism education tool. Linda loves exploring the world with her partner Mike, eating their way through cities, supporting local businesses, and photographing Instagrammable Walls. Linda is a fur-mom to two cats and two dogs.
PrevPreviousClicks of the Day: Monday, July 4, 2011 Edition!
NextClicks of the Day: July 8,9,10 2011 Weekend Edition!Next