Who would buy a nearly $7k phone?! Well. I’m sure people will. Sigh! I don’t understand rich people and the purchases they choose to make.

I am not a teen but I definitely prefer texting/emailing/social media messaging over an actual phone call – LOL. I like this infographic, good info.

This one reports of the scam via email but I also came across a suspicious Google+ link via Twitter too. I was so eager to get Google+ that I NEARLY put in my information before Mike yelled out ‘NO!’ and I realized, Oh, wait, this is probably a scam, lol. Careful all!

Hacking hits Twitter. I don’t think I’m interesting enough to be hacked but still, remember not to have easy to crack passwords, ya’ll!

Stories about vaults/caves/underground whatevers that haven’t been opened in X number of years are always sooo interesting!

Nice write up about the other wonderful features of our city besides the mall (which some would argue isn’t even a wonderful feature lol). I won’t lie though when advertising Edmonton to people who don’t really know, “North America’s biggest mall” is on top of my list of sell points.

Cool discovery! And I didn’t know China owned so much of the rare earth mineral market (when does that ever really come up in day to day discussion? lol).

Interesting read and great timing – I was telling Mike yesterday how fascinated I am with things in my belly button, LOL. #Gross?

This is kind of tooting my own horn but – be sure to check out @KarenUnland’s latest New Media Roundup – she has a lovely write up on… me! So sweet. Very encouraging. Also other local new media tidbits. Karen’s New Media Roundups and @mastermaq’s weekly Edmonton Notes and Media Roundups are all very well worth your time.

Could you imagine being in that situation? I would feel so terrible if I missed (like trying to catch a baseball coming down from the sky…)

I don’t think that would be a good idea.

I love food and I’m sure this is perfectly good but man that looks gross.

WOW stupid! (I admit I’m a culprit for slowing day way more than I should when I’m approaching red light cameras but I’ve been burned by them before so I always feel going slower is the sure bet I won’t be dinged again.. Plus it’s so frustrating when people around you are going so much faster as you’re about to hit a red light camera! I don’t want to be caught in their crossfire!)

Lol, the media WOULD be in a frenzy over something like that… but then again, it is Kate :) I love Kate! #FrenzyApproved

I love this! :) Great to see them actually doing vacation-y stuff as opposed to all the shaking hands and ceremony stuff they’ve been doing thus far, lol.

As opposed to the overly attention grabbing ones I’m used to looking at on the Internet, lol. (and the Thor ones I intend on making!)

Wow how awesome is this!! What an adorable (and smart) monkey!!!!! “The crested black macaque is extremely rare and critically endangered” – so sad! How can they be endangered when they are so smart and Pixar-like. LOL

“US particle physicists are inching closer to determining why the Universe exists in its current form, made overwhelmingly of matter.” 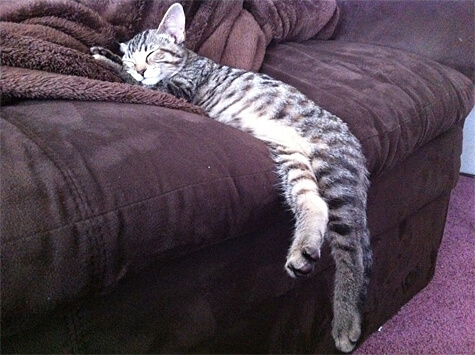 Lol. She is so funny!

Linda Hoang is a Canadian blogger based in Edmonton, Alberta, who writes about travel, food, lifestyle and pet topics. She's also a seasoned social media/digital strategist with a journalism background, the founder of the Edmonton International Cat Festival and co-founder of Stop Race Based Hate, an online anti-racism education tool. Linda loves exploring the world with her partner Mike, eating their way through cities, supporting local businesses, and photographing Instagrammable Walls. Linda is a fur-mom to two cats and two dogs.
PrevPreviousClicks of the Day: July 1,2,3 2011 Weekend Edition!
NextClicks of the Day: Thursday, July 7, 2011 Edition!Next