This is the kicker VO I kept trying to get into the shows this weekend but it just kept getting dropped! (The kicker VO is always the first thing dropped for other, more important news items). It’s just SUCH a bizarre – yet hilarious – story! Seriously: “She was just a head and he says she told him how to build her.” LOL.

It’s like telling someone they aren’t allowed to do something or can’t go somewhere – just makes them want to do it/go there even more!

This is awesome. QR Codes are changing the world!

Sad to see “the News” on that list – but not surpising.

Lol, do you agree/disagree?

“Under the new rules, school districts must notify students’ parents when employees are arrested or charged with any felonies or misdemeanors involving sexual assault, child abuse or indecent exposure.” I don’t know about you but I would be all for this disclosure.

Weird. I don’t think I’d put my dead pet in a casket. (Then again I’m more of a cremation person anyway!) But yeah that’s too much money anyway!

Good tip! I didn’t know that feature was there!

I love veggies :D I was an easy to please youngster.

Awe. I hope the other one makes it out okay.

That is really sucky, she did so well at so many other triathlons!

Well I mean, short shorts always come back… every summer! But I guess this makes it official, lol.

:( It’s like every couple weeks the Clicks of the Day features some kind of animal or thing in Japan that’s been found with high levels of radiation. Terrible.

Crazy. (Is it bad I didn’t know what News of the World was before this whole phone hacking scandal story came to light? I can respect how long it’s been running though, longer than Canada’s been a country, that’s crazy).

Hooray!! (I might as well be blind, good to know once I finally get there there will be some hope of vision. lol).

Will implement these tips to my resume next time I need to submit a resume!

It’s crazy how much they owe…

“Although the Transition has been dubbed a “flying car,” it’s really an airplane that can legally and safely be driven on roads and highways.” So it’s not really a flying car but still, cool. 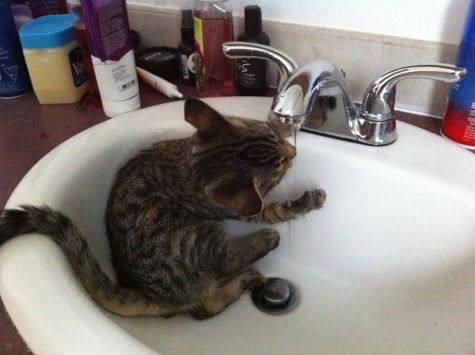 This cat cannot get enough of sink water! Sheesh :)

Linda Hoang is a Canadian blogger based in Edmonton, Alberta, who writes about travel, food lifestyle and pet topics. She's also a seasoned social media/digital strategist with a journalism background. Linda loves exploring the world with her husband Mike, eating their way through cities, supporting local businesses, and photographing Instagrammable Walls. She is the founder of the Edmonton International Cat Festival and a fur-mom to two cats and two dogs.
PrevPreviousClicks of the Day: Thursday, July 7, 2011 Edition!
NextClicks of the Day: Monday, July 11, 2011 Edition!Next