“Anonymous on Thursday took credit for taking down U.S. Department of Justice, FBI and entertainment company websites, following arrests in one of the federal government’s largest anti-piracy crackdowns. Federal agents earlier in the day arrested the leaders of Megaupload.com and shut down the popular hub for illegal media downloads.”

Hm. This tweet from Anonymous sums it up: “Megaupload was taken down w/out SOPA being law. Now imagine what will happen if it passes. The Internet as we know it will end. FIGHT BACK.” :( They government’s not even waiting for SOPA/PIPA to become law. Sheesh. And speaking of SOPA…

“The Stop Online Piracy Act (SOPA), also known as House Bill 3261, would have the power to work in Canada, shut-ting down websites for copyright infringement even if they aren’t running afoul of Canadian laws. ‘The goal in many ways of SOPA is to reach beyond the borders of the United States,’ Geist said. ‘It’s Canadian sites and sites around the world that would find themselves a target for these kinds of actions.'”

Blegh. Just bad news all around.

“It’s called the “Cinnamon Challenge,” and it’s a task some teens are daring each other to do… Dr. Dan O’Connell says he hasn’t heard any established cases of people dying from the cinnamon challenge, but it can cause you to choke, cough, and vomit. When that happens, the cinnamon can get into your lungs, which is especially dangerous for people with asthma – or for kids.”

Pretty stupid thing for kids and teens to do. Sigh. I hope my kids are never this stupid.

“Preliminary interior sketches for Edmonton’s proposed downtown arena were released Thursday afternoon… ICON has collected ideas from other arenas they believe could also be used in Edmonton, such as fan experience zones and historical tribute areas.”

“Google has just released its Q4 2011 results, and they didn’t live up to Wall Street’s expectations. Wall Street’s consensus for the quarter was $10.49 in non-GAAP earnings per share and $8.40 billion in revenue. Google missed on both counts, with EPS of $9.50 and net revenue of $8.13 billion. Google shares are down around 10% in after-hours trading.”

Meh. I’m not too worried about Google, lol.

“Eastman Kodak Co.’s grand days as a vanguard American company, responsible for the millions of photos stuffed in family albums and shoe boxes across the country, seemed far away when the company finally filed for a long-expected bankruptcy. But although many knew that Chapter 11 restructuring was coming for the storied brand — long buckling under competitive and technological pressures and liquidity woes — the announcement still left many in a somber mood.”

“The public’s interest in news about the economy far outreaches media coverage of it for the second week in a row this year, with 20 percent of people surveyed saying it was the story they were following most closely… So why is journalism providing less economic news and more political news than people want?”

Yeah I care more about economic news than political news but I’d say it’s related. We need to be informed about the people who will eventually be leading us, making decisions, investing money in such and such, creating laws, etc. that would (you would think) influence how our economy runs. But of course everyone cares about different kinds of news! That’s what makes the Internet such a great source to find news on topics we know we’re interested in. :)

“Science, discovering a staggering 19,232 species in just one year, including nearly 10,000 new types of insects… Still, it wasn’t all just little stuff. 41 new mammals were discovered in 2009 alone, about half of which were bats and another third were rodents. There were also 133 new frogs, 38 lizards, 31 snakes, and two new turtles.”

Very cool! :) I love hearing about newly discovered species. (That’s the positive side. Then the negative is…) I hope we aren’t responsible for their extinction.

“The federal government on Thursday announced $1.5 million in funding for programs to reduce the frequency and severity of concussions and other brain injuries among children and youth playing sports.”

That’s good. Concussions in sports has been so prevalent in the news this past year, better to invest in preventative measures!

“Kids bombard their parents with questions every day on all manner of subjects and now a survey has found the10 most feared by the grown-ups. Top of the list: Why is the moon sometimes out in the day? Others include: will we ever discover aliens? and how do airplanes stay in the air?”

“A groundbreaking study of long-wed couples finds the personality traits spouses perceive in each other are actually better predictors of marital satisfaction than the ones they perceive in themselves. In other words, it’s not necessarily that you’re conscientious and agreeable but that your partner sees you as such. ‘Perceiving your spouse relatively more positively, and being perceived more positively than you see yourself, are both features of more happily married couples'”

So even if you don’t actually agree with your partner or are totally happy with him/her… as long as he/she thinks you do/are, then it’s all good? lol.

“A new study suggests that people living along the coast of northern Peru were eating popcorn 1,000 years earlier than previously thought.”

Fun! I wonder what movies they watched too! :)

“A man recently married his deceased girlfriend in a combination funeral and wedding ceremony… The couple had planned to get married in the future, but Yingyuen wanted to focus on his studies before tying the knot… Unfortunately, Kamsook unexpectedly died in an accident before the couple could set a date.”

It’s very sad that she died before they could be married but um, it’s kind of creepy that he married her even though she was dead. Placing a ring on a corpse?! That is weird. 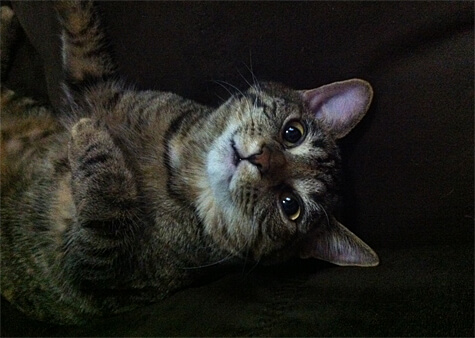 Squeal, I was so pleased to be able to capture her looking at me like this, hehe.

Linda Hoang is a Canadian blogger based in Edmonton, Alberta, who writes about travel, food lifestyle and pet topics. She's also a seasoned social media/digital strategist with a journalism background. Linda loves exploring the world with her husband Mike, eating their way through cities, supporting local businesses, and photographing Instagrammable Walls. She is the founder of the Edmonton International Cat Festival and a fur-mom to two cats and two dogs.
PrevPreviousClicks of the Day: Wednesday, January 18, 2012 Edition!
NextClicks of the Day: Jan. 20, 21, 22 2012 Weekend Edition!Next