“A new study has found that by allowing students to use Twitter to contact their teachers, many overcome their shyness and ask questions that they would likely not have asked using the raised-hand method.”

I could see this! I loved tweeting my teachers in school, LOL. But I was pretty vocal in classes anyway.

“Employees might not literally be asleep on the job, but as far as their employers are concerned, they might as well be: they’re tweeting a massive 700% more now than a year ago, and unless they’re tweeting about company news, that can’t be good for productivity.”

Lol well in the case of working for a news org. – I do tweet about the company ;)

“On Wednesday, the Obama administration denied a presidential permit to construct the $7-billion pipeline, citing the need for a proper environmental review to be conducted while TransCanada vowed it would reapply for a permit… But Eddie Goldenberg, a former adviser to Jean Chretien who is now a lawyer at Bennett Jones, said Canadian officials should consider looking East.”

“Thousands of websites – ranging from social-networking sites to blogs to online pharmacies – went dark on Wednesday to protest against two pending pieces of legislation aimed at countering online piracy by drastically re-engineering the way the Web works within the United States… Even though the biggest corporate opponents of SOPA and PIPA – Google, Facebook and Twitter, among others – didn’t go dark on Wednesday, the digital blackout appears to have prompted several key legislators to drop their support for the bills, in the process altering the political landscape and making it far less likely either bill will pass smoothly.”

“What would you say if tech giant Apple got into the textbook game? According to a report by Bloomberg, Apple will announce on Thursday a set of tools that make it easier to publish interactive textbooks and other digital educational content.”

I wouldn’t be surprised. Apple is poised to take over the world you know!

“Scientists claim they can predict whether someone will live to 100 with up to 85 per cent accuracy after developing a genetic test for healthy aging. Researchers came up with the complex formula after studying the DNA of centenarians and identifying common genetic variations which may have contributed to their longevity.”

I like to leave certain things to be discovered on their own :)

“City shelters are short on spare clothing as it’s trying to help down-and-out men and women who are stuggling to stay warm during Edmonton’s frigid cold snap.”

“Flying in the face of all conventional wisdom, a new study suggests that junk food sold in schools is not making children fat. The researchers themselves could scarcely believe their own findings.”

“Officially, the 1,000 or so specimens chipped from the Rockies have been dubbed Siphusactum gregarium. Unofficially, researchers have called them the tulip animals. They’re less than 20 centimetres long and believed to have been early filter feeders that pumped water into a sack to sift edible plant and animal material. Although hundreds were gathered at the same spot, they didn’t colonize, nor did they cling together. Scientists are still unsure how the tulip-like animals bred.”

“Italy has become enthralled with the tale of two captains. One is Coast Guard Captain Gregorio De Falco, who furiously ordered the skipper of the Costa Concordia to return to his ship and oversee the rescue operations. The other is Captain Francesco Schettino – whom newspapers have branded a coward for fleeing in the face of adversity and who is now under house arrest, accused of multiple manslaughter, causing a shipwreck and abandoning ship.”

Good read and a crazy contrast between the two men.

“It was to be a historic game — the first time an African team would play in the Little League World Series — and it should have taken place seven months ago, at a stadium in Pennsylvania. Instead, it took place Tuesday on a brilliant green field at the end of a potholed road in Kampala, the capital of the East African nation of Uganda. Team Canada travelled to Uganda last week to face that country’s squad in a game originally scheduled to be played in Williamsport, Pa., last summer. The game, which the Ugandan team won, didn’t happen because the players’ visa applications for travel to the United States were denied due to incomplete documentation.”

Great, great story and so great for Team Canada to go all the way over there!! :)

“Rocks from a meteorite shower which fell on Morocco are from Mars, scientists have confirmed. The 15 pounds of rock fell to Earth last July, but were only discovered at the end of December. It marks the fifth time in history that scientists have chemically confirmed Martian meteorites that people have witnessed falling to Earth.”

“Gossip is generally seen as malicious, something that destroys relationships and reputations alike with a deadly mix of garbled half-truths and outright lies. But did you ever stop to consider all the good that gossip does? That’s the idea explored by a team of psychologists at UC Berkeley, who argue that gossip helps keep bad behavior in check, provides a way to protect others from those who would exploit them, and generally allow people to blow off some steam and lower their stress levels. It’s all part of a wide-ranging study that explored just how people responded when presented with situations tailor-made for gossiping.”

“Integrity and authenticity are critical parts of the journalists’ tool kit as well. And journalists know better than most how easily those words can be misused, and how low the bar can sometimes be set for bloggers. But what becomes clear when examining the mommy blogger phenomenon through a journalistic lens is that readers have very different expectations for bloggers and journalists, and in the end, journalists should not want it any other way.”

Good read! So if I consider myself a journalist but also maintain a blog… what expectations should my readers be expecting? I don’t think I post anything too controversial though and no one’s certainly offered me any free products for blog reviews lol. (Maybe one day, haha). 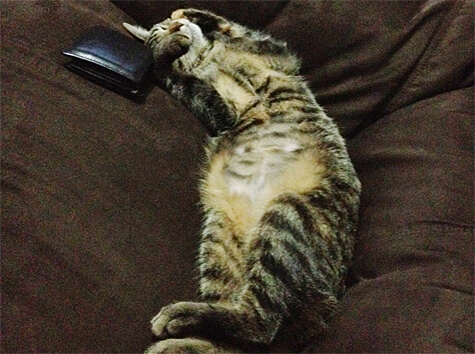 Linda Hoang is a Canadian blogger based in Edmonton, Alberta, who writes about travel, food, lifestyle and pet topics. She's also a seasoned social media/digital strategist with a journalism background, the founder of the Edmonton International Cat Festival and co-founder of Stop Race Based Hate, an online anti-racism education tool. Linda loves exploring the world with her partner Mike, eating their way through cities, supporting local businesses, and photographing Instagrammable Walls. Linda is a fur-mom to two cats and two dogs.
PrevPreviousClicks of the Day: Tuesday, January 17, 2012 Edition!
NextClicks of the Day: Thursday, January 19, 2012 Edition!Next