“Paterno, a sainted figure at Penn State for almost half a century but scarred forever by the child sex abuse scandal that brought his career to a stunning end, died Sunday at age 85.”

A very sad year for him.

“Three Edmonton city councillors and the mayor have opted to take a lower raise than allowed for 2012. That’s down from 2011, when eight out of the 13 council members declined some, or all, of the increase. ”

See whenever councillors/the Mayor reject a raise, to me that’s not very impressive because they make so much money already…

“Apple executives say that going overseas, at this point, is their only option. One former executive described how the company relied upon a Chinese factory to revamp iPhone manufacturing just weeks before the device was due on shelves. Apple had redesigned the iPhone’s screen at the last minute, forcing an assembly line overhaul. New screens began arriving at the plant near midnight. A foreman immediately roused 8,000 workers inside the company’s dormitories, according to the executive. Each employee was given a biscuit and a cup of tea, guided to a workstation and within half an hour started a 12-hour shift fitting glass screens into beveled frames. Within 96 hours, the plant was producing over 10,000 iPhones a day. ‘The speed and flexibility is breathtaking,’ the executive said. ‘There’s no American plant that can match that.’ … Privately, Apple executives say the world is now such a changed place that it is a mistake to measure a company’s contribution simply by tallying its employees. They say Apple’s success has benefited the economy by empowering entrepreneurs and creating jobs at companies like cellular providers and businesses shipping Apple products. And, ultimately, they say curing unemployment is not their job. ‘We sell iPhones in over a hundred countries,’ a current Apple executive said. ‘We don’t have an obligation to solve America’s problems. Our only obligation is making the best product possible.'”

Probably about time, given how poorly RIM has been performing.

“The raging battle over SOPA and PIPA, the proposed anti-piracy laws, is looking more and more likely to end in favor of Internet freedom — but it won’t be the last battle of its kind. Although, ethereal as it is, the Internet seems destined to survive in some form or another, experts warn that there are many threats to its status quo existence.”

Leave the Internet alone New Definition of Autism Will Exclude Many, Study Suggests

“Proposed changes in the definition of autism would sharply reduce the skyrocketing rate at which the disorder is diagnosed and might make it harder for many people who would no longer meet the criteria to get health, educational and social services, a new analysis suggests… For years, many experts have privately contended that the vagueness of the current criteria for autism and related disorders like Asperger syndrome was contributing to the increase in the rate of diagnoses — which has ballooned to one child in 100, according to some estimates.”

“Obese teens not only make easy targets for bullies, in the case of girls, they’re more likely to turn into bullies themselves, according to the findings of a Canadian study on the social fallout of being overweight.”

Kids and teenagers can be so mean.

“What are you doing when you’re driving? Not exercising, that’s for sure. And in the parts of the country where people drive the most, they also pack on the most pounds.”

Would be interesting to see the Canada map equivalent to this!

“Will Apple’s expansion into college textbooks help lower prices for cash-strapped students? … The average e-textbook costs 48 percent of a new hard copy and is more expensive than renting or buying used copies, so digital versions aren’t always a deal for students. On the other hand, Allen says, the iAuthor app could become a promising resource for the open-source textbook market… Bringing more players into the marketplace will result in more competition—and that, Allen says, will be ‘the key to driving down prices long-term.'”

I’m sure a lot of people could get behind that! :)

“Work-life balance is a myth. That myth compels many of us to view an ideal life as a set of perfectly level scales. On the tray on one side is your personal life. On the other side is your work life. With heroic efforts, you can keep both trays exactly level. If one starts to tip too far, you make some kind of nifty move that balances them again. In reality, that perfect balance almost never occurs, except for those rare, fleeting moments when the trays pass each other on the way up or down–and we’re too frazzled to appreciate that brief moment of self-actualization anyway.”

That work at home ideal does seem like a nice one – good read. Though I think I’m too young to feel overworked and super stressed at this point. I feel my balance is pretty good right now.

“What does the dragon mean for the year ahead in the Chinese zodiac? Aaron McArthur reports.”

Do you know how hard it is to find a story about the new year that doesn’t say Chinese New Year?! Very. So I’m pleased to say this report from Global BC refers to it properly – as the Lunar New Year – and also provides cool insight to what the year is expected to bring and the fact that more families are hoping to give birth during this year because the dragon is the most powerful sign! ;)

“Scientists have discovered a species of monkey that were previously believed to have been extinct.”

“The traditional New York accent – where residents pronounce coffee “cawfee” among other things – could be on the wane, it has been claimed.”

Due to negative connections people have with New York accents – thinking they are negative and unfriendly, lol. Funny.

“There are more options now than ever to have something “different” for the budget conscious, including a smaller restaurant wedding, a unique location or a “weddingmoon” (destination wedding)… But just how little can you get away with spending? “You can pull off a great wedding with as little as $5,000 but you would need to compromise on quite a few things.” 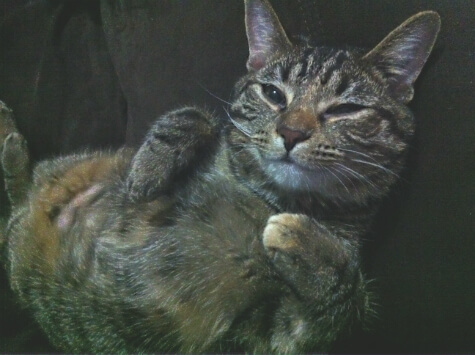 Thor is the CUTEST!!

Linda Hoang is a Canadian blogger based in Edmonton, Alberta, who writes about travel, food, lifestyle and pet topics. She's also a seasoned social media/digital strategist with a journalism background, the founder of the Edmonton International Cat Festival and co-founder of Stop Race Based Hate, an online anti-racism education tool. Linda loves exploring the world with her partner Mike, eating their way through cities, supporting local businesses, and photographing Instagrammable Walls. Linda is a fur-mom to two cats and two dogs.
PrevPreviousClicks of the Day: Thursday, January 19, 2012 Edition!
NextClicks of the Day: Monday, January 23, 2012 Edition!Next