“The Saskatchewan government is taking the next step in going ahead with Multiple Sclerosis liberation therapy clinical trial in the United States… ‘Saskatchewan has aggressively pursued options to advance MS research, and we will continue to support studies that will accomplish that goal.'”

“An Ontario court has upheld Canada’s public nudity law, ruling Thursday that a man who went through a Tim Hortons drive-thru without clothes on expressed only his own wish to be publicly naked and didn’t demonstrate anything important about nudism.”

“‘I see enormous opportunities here in Edmonton to create – or I should say reclaim – an industry that already has a tremendous infrastructure in place, including studio space.'”

I look forward to seeing the finished product!

“The childhood home of acclaimed Edmonton-born philosopher Marshall McLuhan is being offered to the city to buy and preserve as an arts and writing centre.”

I think that’s a really great idea. It still surprises me when I think that he was born here.

“Storify has just launched a brand new WordPress plugin which streamlines the process of creating stories and sharing them on your WordPress blog. What’s really cool about the new WordPress plugin is not just the fact that it makes using Storify in WordPress so much easier, it also gives you remote access to the sites’s major features. You can edit existing stories, or even create brand new stories from scratch right from WordPress.”

Me likey. I hope to get some more Storify use in the near future.

“The Florida man is Josh Fonner, 23, a customer sales and service representative whose photos were taken from his personal pages on the Internet. He later found them captioned with snarky, cruel jokes and spread across the Internet for the world to see… “It’s a really weird mixture of horror, shock, amusement, and leeriness,” he said of seeing himself as a meme.”

This is a really interesting story. I don’t tend to use those kind of memes. I’m more of the rage comics/cat meme-user. If it’s a real person you have to think, that is someone.

“MySpace, the grand daddy of social services is still wheezing along, comScore says in its latest social media report. In fact it is bigger than Tumblr and Google Plus. I have no idea where (and why) MySpace is getting so much traffic – still. Infact, people spend more time on MySpace, a dying platform than on Google Plus says a lot about the latter.”

Lol. This surprises me. It just won’t die already.

“Twitter argues that by promoting Google+ in search results, Google isn’t providing the most relevant social results… Google has confirmed to Mashable that it has never indexed the “@” symbol. In other words, the search engine has never recognized a Twitter handle when it was formatted that way… In the end, exactly how Google search results came to be dominated by Google+ pages — either as a result of having little access to other social networks or by intentionally ignoring them — isn’t that important. The important question is whether or not this domination is good for consumers.”

“Shazam’s future involves applying its discovery engine to television and all of the brands that flow through it, says CEO Andrew Fisher. And it could be as simple as a button on your channel flipper.”

“Michelle Obama has officially joined Twitter today using the handle @MichelleObama. The First Lady and her staff announced they will be using the account as another tool in the re-election campaign for President Barack Obama.”

“A new survey found most smartphone users tend to get their news fix from social media surfing rather than from dedicated news apps.”

“It appears increasingly likely that David Letterman will extend his contract, pushing him past the 30-year run of his idol, Johnny Carson.”

But he is so unfunny!

Including “heartbeat-powered nanogenerators that could soon replace batteries” – “online gamers solve a decade-old HIV puzzle in three weeks” – “a device that lets you see through walls” – “scientists engineer highly virulent strains of bird flu” and more! The breakthroughs and discoveries are only going to get bigger and more frequent in 2012 and beyond I’m sure. Also more dumb breakthroughs like virulent strains of bird flu that could destroy mankind are on its way, I’m positive.

“Scientists are facing a riddle. For two years, researchers at Dauphin Island Sea Lab in Alabama have been studying the diets of Tiger Sharks in the Gulf of Mexico and they found that the sharks not only eat sea creatures, but also make a habit of eating land birds. Yep that’s right woodpeckers, catbirds, kingbirds and swallows have all been found in their bellies.”

Of course the scientists are trying to find a logical explanation but I’m sure aliens have something to do with it ;) Lol!

“Micheal Tellinger ventures to South Africa and brings us footage of what some believe is a giant human-like footprint in granite rock thought to be 200 million to 3 billion years old.”

Of course giants once roamed the Earth. I believe it!!!

Lol, so cute! I have never seen an iguana that big before but I guess they exist and can be pets, LOL. 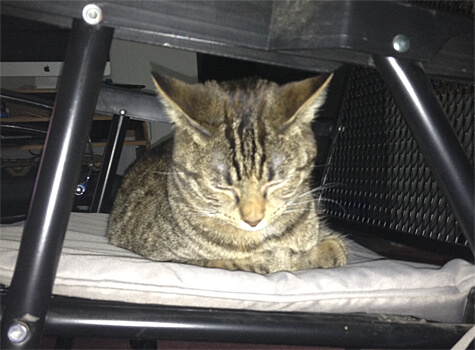 The flash is disturbing Thor’s slumber.

Linda Hoang is a Canadian blogger based in Edmonton, Alberta, who writes about travel, food lifestyle and pet topics. She's also a seasoned social media/digital strategist with a journalism background. Linda loves exploring the world with her husband Mike, eating their way through cities, supporting local businesses, and photographing Instagrammable Walls. She is the founder of the Edmonton International Cat Festival and a fur-mom to two cats and two dogs.
PrevPreviousClicks of the Day: Wednesday, January 11, 2012 Edition!
NextClicks of the Day: Jan. 13, 14, 15 2012 Weekend Edition!Next