“The World Health Organization says it will take a role in helping sort through an international scientific controversy over two bird flu studies that the U.S. government deemed too dangerous to publish in full… Some of the issues need answering in the immediate term — what to do, for instance, with the viruses in question and how broadly to share details of the work that led to their creation. But there are longer-term concerns too, such as how to set up systems or structures that will work over time — not just for these influenza viruses, but potentially other lab-made pathogens as well.”

Sigh. I’m telling ya, humankind (a.k.a. rich people and scientists) will cause the end of us all.

“Maritime authorities, passengers and mounting evidence pointed Sunday toward the captain of a cruise liner that ran aground and capsized off the Tuscan coast, amid accusations that he abandoned ship before everyone was safely evacuated and was showing off when he steered the vessel far too close to shore.”

Scary incident!! Makes you think twice about going on cruises?! Although accidents do happen everywhere. I can’t imagine what it would feel like being trapped in a cabin on the tilted ship, waiting, hoping for rescue!! Ah.

“God save the Queen and pass the joint. Federal Liberals have shot down a proposal calling for Canadians to consider cutting this country’s ties to the monarchy. But they’ve thrown overwhelming support behind another calling for the legalization and regulation of marijuana.”

They’re also allowing any Liberal supporter to vote for their next leader (as opposed to the previous rules where only card-carrying members could vote). “Bold” moves for a party that was destroyed in the last election. Will it help?

“‘I didn’t know exactly how to handle it and I was afraid to do something that might jeopardize what the university procedure was,’ he said. ‘So I backed away and turned it over to some other people, people I thought would have a little more expertise than I did. It didn’t work out that way.'”

Turned it over to other people, then didn’t follow up on it. You can’t you say you don’t know how to handle that kind of a situation. If a grown man is (allegedly) sexually abusing a child, you make sure you tell people, you try and make sure it doesn’t happen again. It’s not rocket science.

“Brazilian workers who find themselves answering work emails on their smartphones after the end of their shifts can qualify for overtime under a new law.”

Crazy. With Volkswagen telling its employees it won’t email them during after hours work as well I think more and more companies are getting on board with this! I doubt it could or would ever happen in the media industry though, lol.

“ASA has published an image of the pollution haze taking all over the North China Plain. Yes, it’s so bad that you can see it taking over thousands of square miles from space… ‘all that gray crap is pollution’… It’s no coincidence that their architects are obsessed by air quality control inside their buildings.”

“To counter the effects on wildlife of overpopulation and climate change, Dutch architects float a proposal for an urban Noah’s Ark.”

“Neonicotinoids (pesticides) were found in all samples of nearby dead bees. Even at sublethal levels, the pesticides can affect orientation, brood rearing, and communication.”

Sad. We destroy everything around us.

“Despite the fact that we Canadians spend a good chunk of our year in the chillier months, many of us simply forget how to drive during that fateful first snowfall. An especially rough recent morning commute inspired this list of ‘the stupid things people do when driving in the winter'”

It’s so true!! Drive slower and safer please everyone!

“Public transit may not have been 2011’s juiciest issue, but it edged out all the rest to become the year’s hottest 311 topic.” Other topics include questions about recreation & facilities, city information, residential and commercial planning, and roadway maintenance.”

“Digital technology is growing old for a new generation of hipsters who are turning to low-tech film cameras for something they’ve never had before — snapshots they can hold in their hands.”

I love lomo cameras & their effects!! :) I have a fisheye. I have been to Vivid and the article is right that place is STOCKED! I was really interested in collecting these cameras before but interest dwindled when all of the lomo-like apps for the iPhone came out, lol. Still awesome though.

“In a twist of technological irony, one of the latest cellphone accessories is a corded, analogue phone handset that makes talking on those tiny phones a whole lot more comfortable.”

Lol. Looks and sounds funny but I can see the appeal.

“How can a sheet of paper become an unaccountably tough projectile simply by the act of crushing? The answer might seem simple, but it turned out that finding a sound explanation required complex instruments and a lot of brain power… There is something of a niche research field in paper folding.”

Really interesting article on a topic you don’t usually think about! (or expect there to be researchers for!!)

“A cash-strapped New Zealander is auctioning off the chance to put a tattoo on her derriere so she can pay her bills… She set up an online auction under the title “Your Tattoo on my Bum” and within 24 hours bidding had reached NZ$10,250 (US$8,135) while another three people have followed suit with auctions offering body parts to be tattooed.”

This is so bizarre. Sad, first of all because she’s that desperate for money. Then so weird and wasteful that people would actually bid that high for something like that?! 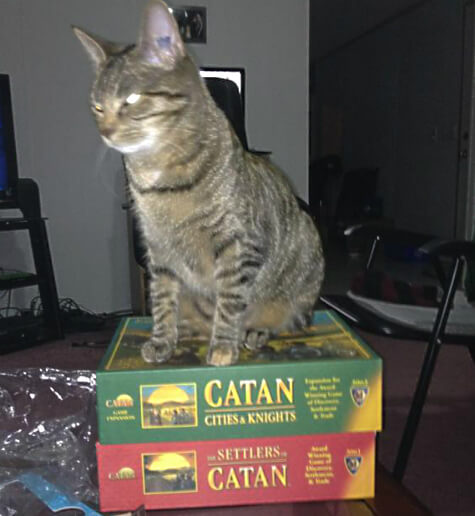 Thor, Queen of Catan!! (Also you can see the tattoo in her ear. She is a tough cat!).

Linda Hoang is a Canadian blogger based in Edmonton, Alberta, who writes about travel, food, lifestyle and pet topics. She's also a seasoned social media/digital strategist with a journalism background, the founder of the Edmonton International Cat Festival and co-founder of Stop Race Based Hate, an online anti-racism education tool. Linda loves exploring the world with her partner Mike, eating their way through cities, supporting local businesses, and photographing Instagrammable Walls. Linda is a fur-mom to two cats and two dogs.
PrevPreviousClicks of the Day: Thursday, January 12, 2012 Edition!
NextClicks of the Day: Monday, January 16, 2012 Edition!Next