“There was supposed to be a rooftop garden, rainwater recycling and a community Smart car for residents of the environmentally friendly yet luxurious condominium complex. But the Bellavera Green touted in promotional material is a far cry from the unfinished and partially abandoned building that sits now on the western edge of Leduc. This week, the promise of “visionary, urban” living was replaced by an evacuation order from the Leduc fire department, citing “critical life-safety concerns.” About 150 residents living in the building’s 85 completed units have been told they must be out by the end of March.”

How awful it would be to have this happen to you. Poor tenants. I hope the right people are held accountable for this.

“A friend of an Alberta couple whose two-day-old baby was killed by the family’s pet husky says the dog was probably trying to comfort the crying boy when it delivered one fatal bite to the child’s delicate, tiny head. It was not a vicious attack, she said, and the same bite wouldn’t have killed an older child. The parents believe the dog may have been trying to care for the child.”

This story breaks my heart. Poor dog. I’m sure he wasn’t trying to hurt the baby :(

“Canada’s resource-rich western provinces have been barely fazed by global economic uncertainty and are expected to lead the country in growth in 2012 with Alberta at the head of the pack, the Conference Board of Canada said Thursday.”

“The University of Hawaii and Cornell University are looking for six people to participate in a Mars exploration simulation mission that involves tasting food. Here are some of the requirements listed in their call for participants: willingness and ability to eat a wide range of foods, normal sense of taste and smell, smoke-free for at least two years, bachelor’s degree in engineering, biological/physical sciences, mathematics or computer sciences.”

Aside from the bachelor’s degree part, everything else sounds so fun! What a cool experience that’d be.

“A coalition of Internet giants including Google has agreed to support a do-not-track button to be embedded in most Web browsers — a move that the industry had been resisting for more than a year… The companies have agreed to stop using the data about people’s Web browsing habits to customize ads, and have agreed not to use the data for employment, credit, health-care or insurance purposes. But the data can still be used for some purposes such as ‘market research’ and ‘product development’ and can still be obtained by law enforcement officers.”

“Apple has filed a patent application for a key-travel design that it claims will allow for a “thin profile, aesthetically pleasing keyboard.”

Keyboard aesthetics, the filing claims, is of great importance because ‘outward appearance contributes to the overall impression that the user has of the computing device.'”

The best keyboard ever?

“In this world, you might be nothing, ‘but online you might be king.’ … ‘In a world where people are working across borders, across time, across companies, and across ethnic groups, there isn’t enough time to get to know each other. You need something like Klout to establish the strength of that relationship. It enables social collaboration and social commerce at scale that we’ve never seen before.'”

It’s not as far-fetched as it may sound at first.

“Google is looking to get into the paid TV business. The company filed an application last week to provide video service to residents of Kansas City, Mo., according to The Wall Street Journal. If approved, the service could launch as soon as a month from now, according to the article, which cites a “media executive currently involved in negotiations to license channels to the service.” Offerings in the video package would include live TV as well as on-demand and online access to TV channels, according to the report, which was based on an earlier article by The New York Post.”

What isn’t Google looking to get into?

“As more and more competitors for traditional media outlets emerge… there seems to be a growing obsession with defining what journalism is, and who deserves (or doesn’t deserve) to be called a journalist… The question that matters is whether it serves the reader… Many journalists like to focus on sexier pursuits like foreign reporting and investigative stories, but the reality is that much of what we call journalism is very different. In the end, it has to serve the reader — either by informing them or entertaining them, or some combination of the two. That’s not something to be ashamed of.”

“‘I wrote the headline in reference to the tone of the column and not to Jeremy Lin’s race. It was a lapse in judgment and not a racist pun. It was an awful editorial omission and it cost me my job. I owe an apology to Jeremy Lin and all people offended. I am truly sorry.'”

I huge lapse in judgment. I just don’t see how he didn’t think that headline would be a bad idea…

“J.K. Rowling, the British author whose “Harry Potter” fantasy series ignited a passion for reading for millions of children around the world, has emerged from a five-year publishing hiatus with a new book: this time for adults.”

“We often worry about lying awake in the middle of the night – but it could be good for you. A growing body of evidence from both science and history suggests that the eight-hour sleep may be unnatural.”

“According to the study, published in Psychoneuroendocrinology, higher levels of oxytocin — the hormone known as the “cuddle chemical,” which rises during breast-feeding, lovemaking and parent-child bonding — were associated with more emotional responsiveness between couples and predicted which couples would stay together longer than others… couples with the highest levels of the hormone early on were more likely to stay together, compared with those with lower levels — at least based on the 25 couples who were still together and with whom the researchers were able to follow up six months later.”

I’ll bet mine and Mike’s cuddle chemicals were high early on our relationship! ;)

“Just when you thought fast food couldn’t get any more disgusting, scientists up the ante by developing hamburgers in a Petri dish. Yes, you read that right… The Petri dish-bred beef is created using stem cells from bovine muscle tissue sourced from leftover slaughterhouse materials.”

“Here in this dingy alleyway is the leading edge of what Seth Killian, director of online and community strategy at Street Fighter maker Capcom, calls the “second wave” of video arcades — run not by businessmen looking to make a buck, but by those with a passion for communal gaming. Now, the big family arcades are closing and the gamers are moving back into the rat-holes. In San Francisco, New York, Austin and elsewhere, these gritty little storefronts hearken back to the days when arcade cabinets mostly lived in bars, pool halls and run-down amusement parks. They are a place for gamers to test their skills against like-minded enthusiasts, a digital Fight Club for those looking for something more than Skee-Ball and Dance Dance Revolution. It’s in these packed alleyways and basements that video arcades are staying alive.”

Great story! I always thought it was sad seeing the arcades slowly but surely shut down. Not surprising people are still keeping it alive. Would be cool to see a similar revival like this in Edmonton.

“Alcohol may be known as the demon drink but a growing number of people are billing alcohol-to-jet (ATJ) fuel as having the potential to save the aviation industry from its dependence on fossil fuel.”

Got to think outside the box, lol.

“With over 2 million downloads on iTunes within a year of its release, her latest album 21 has earned the soulful 23-year-old British singer the title of first artist ever to go double platinum on Apple’s iTunes Store in the U.S.”

Unsurprising. She does rock. :)

“Behold the ‘Gulliver Museum,’ a 12,000-kg and 70-meter-long inflatable, mobile museum that currently lies at Chaoyang Park, Beijing. It’s so big that it received a certification from the Guinness Book of Records as the ‘tallest inflatable statue in the world.’ Visitors to the museum start their journey at the left foot, from which they continue deep into a labyrinth that eventually ends at the right ear.”

Lol. Odd. But kind of cool. 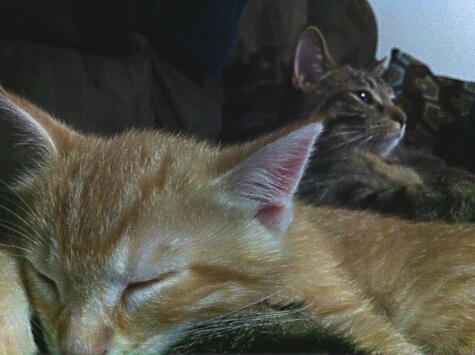 They play too, not just nap but it’s easier to get photos of them napping. lol.

Linda Hoang is a Canadian blogger based in Edmonton, Alberta, who writes about travel, food, lifestyle and pet topics. She's also a seasoned social media/digital strategist with a journalism background, the founder of the Edmonton International Cat Festival and co-founder of Stop Race Based Hate, an online anti-racism education tool. Linda loves exploring the world with her partner Mike, eating their way through cities, supporting local businesses, and photographing Instagrammable Walls. Linda is a fur-mom to two cats and two dogs.
PrevPreviousClicks of the Day: Wednesday, Feb. 22, 2012 Edition!
NextReview: BanzaiNext