“After interviewing more than 2,000 doctors and extensive in-depth discussions with stakeholders, the HQCA made 21 recommendations.In the final report released Wednesday, the concerns over unacceptably long wait times were justified… The report adds no deaths can be attributed to excessive wait times.”

Interesting findings. Still no one can see the system is working…

“As Canadian live longer and face tougher financial choices in their golden years, fewer than a third of respondents in a new survey plan to be fully retired by 66. Sun Life Financial’s annual Unretirement Index poll, released early Wednesday, found that only about three in 10 Canadians surveyed said they plan full retirement at that age. Nearly five in 10 – about 48 per cent – said they plan to work part-time or freelance while they ease into retirement.”

It’s good to keep busy even later in life but it’s sad more and more people need to work longer in order to keep on top of debt.

“The study ranked cities based on access to Wi-Fi hotspots, consumer spending on computers, the use of the Internet and smartphones, and behaviour on social networking sites.Burlington was followed by three British Columbia cities, including Port Coquitlam in second place, Vancouver in third and Langley in fourth.”

Edmonton takes the 9th spot (up from 13th last year). Let’s all be a little more careful and a little smarter when it comes to passwords, online banking, online shopping, scams, etc.

“Hacktivist group Anonymous has released more details about Public Safety Minister Vic Toews, who was under siege on twitter last week for his controversial ‘online snooping bill.’ Anonymous’ latest leak claims to reveal the woman involved in Toews’ now-public divorce. In a seven-minute YouTube video, Anonymous names Stacey Meek as his alleged mistress, claiming that she was a babysitter with whom he had an affair between 1986-1993.”

And yet… only six years in jail? He’s obviously not getting it. And next time he could kill someone. I’m surprised he hasn’t yet. Wow.

“While the food industry applauded Health Canada’s decision to approve a new claim that advises Canadians to replace saturated fat with vegetable oil, health experts and nutritionists say the move isn’t in the best interests of Canadians and will likely mislead consumers.”

Eating healthy is too hard (and expensive) anyway.

“Google plans to start selling glasses by the end of the year that can stream online information and make it visible via a small screen near the eyes, the New York Times reported.”

The future is coming!

“Shortly after 1 p.m. ET, Twitter hit 500 million users, according to Twopcharts.com. Naturally, the analyst company is on to the next benchmark — the countdown to 600 million registered users. The estimated time until the next Twitter celebration is only 108 days away. There were an estimated 922,000 users accounted for in the past 24 hours.”

“‘To me, that sounds unhealthy,’ Stone told a Montreal business luncheon, recounting how some people have said they’re so engaged, they’ll log onto Twitter for 12 hours straight. ‘I like the kind of engagement where you go to the website and you leave because you’ve found what you are looking for or you found something very interesting and you learned something. I think that’s a much healthier engagement.'”

“We’re talking about an interface with exponential possibilities. If the five-button keyboard gives us 2^5 binary combinations (or 32), realize that a 10-button version could offer 2^10 (or 1024) different letters and commands. Scale the idea to the typical 100-button QWERTY on our laptops, and your options are labeled in scientific notation. Just when you thought typing classes were a dated idea…”

Sometimes I wish my phone were easier to touch screen type with one hand!

“Amid a recent war of words between Taiwan and China over the ancestral homeland of rising NBA star Jeremy Lin (林書豪), a US lawmaker yesterday stressed the Taiwanese American’s US roots during a meeting with President Ma Ying-jeou.”

“The research firm revealed yesterday that carriers lost $13.9 billion in SMS revenue in 2011 because of consumers chatting with friends on social-messaging applications. Those applications range from everything from Facebook’s mobile app, which features chatting, to instant-messaging apps. Apple’s iMessage is also included in that list… ‘Social messaging has disrupted traditional services, and operators’ revenues in this area will come under increasing pressure.'”

“A study suggests that those who text more are less accepting of new words and more rigid about existing ones.”

“Sure, they can be ferocious predators, but sometimes a mountain lion appears as docile as a common house cat. The latter happened in the Los Altos Hills Tuesday morning, when Cody, an 85-pound German shepherd, chased a trespassing mountain lion into a tree in his owners’ backyard.”

“What is with cats loving to lounge in sinks.” 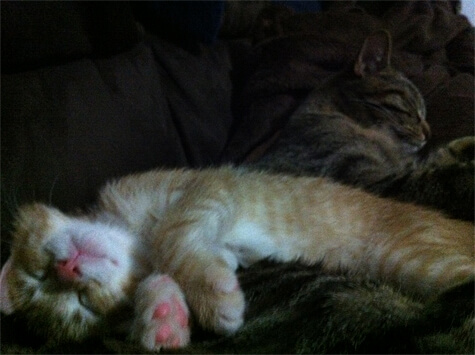 Linda Hoang is a Canadian blogger based in Edmonton, Alberta, who writes about travel, food lifestyle and pet topics. She's also a seasoned social media/digital strategist with a journalism background. Linda loves exploring the world with her husband Mike, eating their way through cities, supporting local businesses, and photographing Instagrammable Walls. She is the founder of the Edmonton International Cat Festival and a fur-mom to two cats and two dogs.
PrevPreviousReview: Thai Flavours
NextClicks of the Day: Thursday, Feb. 23, 2012 Edition!Next