“‘Phone finder’ apps have been increasingly popular with smartphone users, but do they work? Trouble Shooter Julie Matthews investigates.”

“When the time came for Merriam-Webster to pick its top word of 2011, its editors decided they needed to be pragmatic. So they chose … pragmatic.”

I find it funny that 2007’s word was “w00t” lol. Surprised the word wasn’t protester or demonstrator or revolution!

“‘They start at 14 and everyone says to them, ‘Wow, you’re incredible. You’re so skinny. You look like a boy.’ And once that girl is 18 and her body is finished growing, all of a sudden it was like, ‘Oh, she’s fat.’ The poor girl. She’s just growing. We felt it was unethical to support that.'”

That’s a great move by those photogs.

“The most dangerous cities in Canada are in the western part of the country, according to the latest rankings from Maclean’s magazine… ‘Year after year, western cities dominate the rankings as the worst for crime,’ the magazine said in a statement Thursday. ‘And, in reverse, the most populous cities in Ontario and Quebec consistently score well.'”

Yikes, I had no idea Prince George and Victoria were that bad. Meanwhile:

“A man found shot near a playground in the west end is Edmonton’s 45th homicide this year.”

But then the whole dangerous Canadian cities survey puts it into perspective.

This is good! But you should always try and keep your social media profiles squeaky clean anyway, just in case. :)

“It’s been a rocky 12 months for Research in Motion (RIM)… From disappointing PlayBook sales to software glitches, service outages and drunken executives, RIM’s brand has taken a beating.”

Just makes me cringe, poor RIM. And add this to that:

“Research in Motion (RIM), which makes Blackberry phones has announced a delay to the launch of its new Blackberry 10.”

Eep. No one wants that phone anyway, lol.

“Microsoft announced this morning that it will begin auto-updating Internet Explorer (IE) users’ PCs to the latest versions of the browser, a situation that will vary somewhat according to which Windows version they’re using.”

Lol very good. Except seems silly that they’re auto-updating but if you declined an update before you won’t get auto-updated. Pointless? Lol. Except IE should just die off in general.

“Another score for Google Chrome. The latest version of the search giant’s web browser just passed Internet Explorer 8 (IE8) to become the most popular desktop web browser in the world.”

“Americans now are spending more than a hour a day with their cell phones, more time than they do with print media. And TV time? That’s up, too, whether it’s live TV or DVR programs or DVDs, and still the biggest in terms of where we focus our media attention.”

I’m surprised it’s not more than just an hour on cell phones. I haven’t consumed news from an actual newspaper in a looong time. As for the TV thing – kind of contradicts the “death of TV” prediction from previous Clicks of the Day!

“In 2011, Google users worldwide were more interested in tech topics, “Battlefield 3″ and Steve Jobs than almost anything else. Among the fastest-rising searches was of course, the royal wedding of Prince William and Kate Middleton. That comes in 7th, followed by queries about the iPhone 5 and the popular football computer game, Fifa 12.”

Just Google it! And everyone did.

“As Canada becomes both increasingly multicultural and urban, we’re seeking out different foods in our everyday lives. In 2011, it was a combination of comfort foods, trendy treats and Delhi dishes.”

Including including butter chicken, cake pops, and macaroni salad!

“People around the world began seeing messages from Facebook on Thursday encouraging them to start scrapbooking their life.
The service’s new Timeline profiles, which Facebook introduced nearly three months ago at its annual conference, is now available to any of the site’s 800 million users who decide to activate it. Soon, Facebook will turn it on for everybody with an alert at the top of profiles.”

“Conservative MP James Bezan, based in Manitoba, has proposed a member’s bill that would restrict access to tanning beds to those over the age of 18 and require the devices to carry warning labels listing risks associated with their use. The bill would also require posting warning signs wherever tanning equipment is provided.”

I’ve never used a tanning bed in my life! I don’t think there’s anything wrong with this proposal! :)

“Three in four women believe there is no such thing as the perfect man, with most seeing their partner as only 69 per cent perfect.”

“Social media posts and public forums are lighting up a 30-foot-tall, state-of-the-art Christmas tree. Canadian Tire unveiled the tree earlier this week at Toronto’s Union Station. The 3,000 LED lights wrapped around it are powered by “positive Christmas spirit” messages.”

“It took 16 long days and over 500 cans of spray paint, but the Montreal-based artist-run collective A’Shop finally completed its massive Art Nouveau-inspired mural of ‘a modern-day Our Lady of Grace.'”

Leave it to Montreal to make street art as beautiful as that!!

“The 15-year-old Tom even sits on bemused passengers’ laps as the bus makes up to 10 mile round trips from Bridport to Charmouth in Dorset. Dodger is such a regular customer that some of the drivers take tins of cat food to work with them to give to him. They even know what stop to let him off at… ‘Given this cat is elderly we suspect it would be eligible for free travel, perhaps a bus puss, if such a thing existed.'”

What an adorable story!!!

“Both the dog and the dude in the underwear groove to their favorite song.”

LOL, I love this! 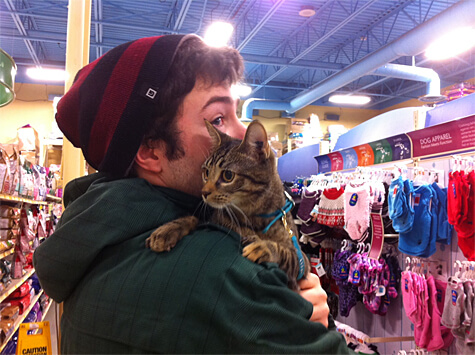 Linda Hoang is a Canadian blogger based in Edmonton, Alberta, who writes about travel, food, lifestyle and pet topics. She's also a seasoned social media/digital strategist with a journalism background, the founder of the Edmonton International Cat Festival and co-founder of Stop Race Based Hate, an online anti-racism education tool. Linda loves exploring the world with her partner Mike, eating their way through cities, supporting local businesses, and photographing Instagrammable Walls. Linda is a fur-mom to two cats and two dogs.
PrevPreviousClicks of the Day: Wednesday, December 14, 2011 Edition!
NextClicks of the Day: Monday, December 19, 2011 Edition!Next