(although it should be more days since I’ve been slacking on these lately!!)

“Japanese artist iori tomita transforms the scientific technique of preserving and dying organism specimens into an art form with his series.”

“The heaviest piece to hit the ground will be about 350 pounds, but no one has ever been hit by falling space junk in the past.”

Hope I’m not the first one, lol.

“Prof Stewart, 46, a geologist and TV presenter who teaches geosciences communication at Plymouth University, said the stunt is intended to demonstrate the importance of plants to human survival as the ‘lungs of the planet’.”

“Pandas. Zoos want them, other bears want to be them (maybe?). But are they really worth all the trouble? Let’s fight about it.”

“Google’s flight search function allows us to compare flights, fares, dates and destinations in an instant.”

Cool but only available for certain U.S. cities at the moment.

“The death toll in the crash of a World War II-era plane during a Reno air race rose to nine people Saturday as investigators combed through wreckage and scoured amateur video clips to determine why the aircraft suddenly spiraled out of control and plummeted to the ground near hundreds of spectators.”

Sad story. But even more sad is that…

“A World War II-era plane has crashed and burst into flames on a runway at a West Virginia air show.”

What!!! Another WWII-era plane crashes at another air show just a day after?! Sad :( (and weird coincidence…)

“Mobile apps are available for all sorts of interests, be it games and music, organization and budgeting, even apps to entertain your pets. But what about baby?”

Not just baby but toddlers/young kids. It’s amazing how my cousin’s 3 year old knew how to use his iPhone/iPad. And there are really cool/fun/educational apps out there for them! The next generation…

“An Alabama pharmaceutical company issued a voluntary nationwide recall Friday for ‘multiple lots’ of birth control pills due to what it described as a systemic ‘packaging error.'”

“New research indicates that jelly fish rival plankton-eating fish, such as sardines and anchovies, when it comes to plucking prey out of the water and using the energy from it.”

They are going to take over the oceans!!

“The world’s largest sperm bank has started turning down redheaded donors because there is too little demand for their sperm.”

Ouch. Burn on redheads. And also…

“Sitting all alone on a beach, this little seal is an outcast from the colony. Its crime? Having reddish-brown fur and the palest of blue eyes.”

SO SAD! Even red animals aren’t wanted :( I hope the little guy makes it…

“Three white tiger cubs have been adopted by an unusual surrogate after being rejected by their mother.”

“If you have compassion for animals and want to help put an end to cruelty and mistreatment that occurs on a daily basis–you don’t have to sit back.”

Lol this is not so much a news article but something that I actually googled this week after feeling very emotional about humanity and our evil towards animals.

“Norman the dog has a pretty rare talent.”

I’ll say!! What a talented dog and such a cute story.

“What Berg’s work had done was elevate the animal to the being that connects with a human heart. Immediately, the dog rescue group’s adoption rate soared.”

Great story!!! Should be done here too! Although the pictures of animals at Edmonton’s Humane Society aren’t as bad as the original caged/blurry/fuzzy ones in that story — it’d still probably help the whole excessive cat situation if they had a fun photoshoot!!

From the cat’s diary… “Day 983 of my captivity. My captors continue to taunt me with bizarre little dangling objects.”

For example… “Hypersexual Disorder. These experts say there’s a need to label this disorder as a unique mental health condition because some people have ‘recurrent, ‘out of control’ sexual behaviors that are not inherently socially deviant.'”

“A German restaurant in Chicago wanted a world record in the “wurst” way — and they succeeded — with a 47-foot, three-inch bratwurst.”

“Northeastern states are facing a jack-o’-lantern shortage this Halloween after Hurricane Irene destroyed hundreds of pumpkin patches across the region, farmers say.”

A shortage you probably wouldn’t have expected to be caused in the aftermath of Irene. Pumpkins aren’t really a major part of my life so this shouldn’t affect me too much, lol.

“For a long time, ‘The Lion King’ held the record as the best-selling home video release, having sold 30 million copies on VHS.”

The Lion King is awesome.

““If you can’t beat ‘em, join ‘em.” This appears to be the current motto of both Facebook and Twitter as they have joined forces to try to provide an improved social networking experience. Could this spell doom for Google+?”

Any Clicks of the Day visitors actually actively use Google+? #Idon’t

Lol. The most animated crash victim describing what happened, you will ever see. 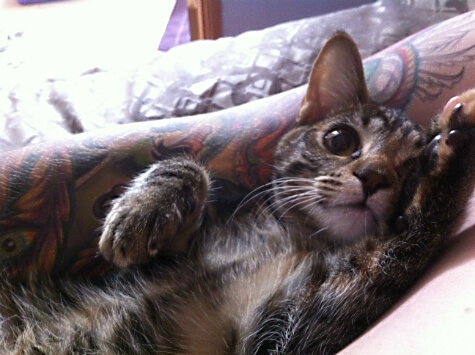 Linda Hoang is a Canadian blogger based in Edmonton, Alberta, who writes about travel, food, lifestyle and pet topics. She's also a seasoned social media/digital strategist with a journalism background, the founder of the Edmonton International Cat Festival and co-founder of Stop Race Based Hate, an online anti-racism education tool. Linda loves exploring the world with her partner Mike, eating their way through cities, supporting local businesses, and photographing Instagrammable Walls. Linda is a fur-mom to two cats and two dogs.
PrevPreviousFeature Story: Edmonton’s What the Truck?! and the growing street food movement
NextClicks of the Day: Monday, September 19, 2011 Edition!Next