“A five-inch-long baby dinosaur with a short nose, armor and spikes went belly-up and likely drowned in what is now the Washington, D.C. beltway, say scientists, who describe the find as a new species as well as the first hatchling of any dinosaur species ever recovered in the eastern United States.”

The illustration of it is awesome. Sad that it likely drowned in the river (scientists say) :(

“Villagers like Hasanuddin Sanusi have heard since they were young how the mountain they call home once blew apart in the largest eruption ever recorded — an 1815 event widely forgotten outside their region — killing 90,000 people and blackening skies on the other side of the globe.”

Eep. Yeah better not to risk hanging around that.

“he death of an 84-year-old Edmonton woman following a break-in at an Edmonton senior’s lodge is now being investigated as a homicide.”

Edmonton is at 38 homicides now. Our record is 39. I see that being easily reached/passed. Which is sad. This particular case is so sad, she was just a senior sleeping in her fricken home. Some people are sick.

“PayPass is a payment method that lets you tap a credit card or a phone with an NFC chip in it to make a payment. ”

Hm. Well I don’t use Netflix at all so this all does not affect me but I know it’s got others talkin’

“The Cup Noodles Museum, built to commemorate the 40th anniversary of the production of the first Cup Noodles by Nissin Foods Holdings founder Momofuku Ando, will open to the public on Saturday in Yokohama, Japan.”

“Apple Inc. stock reached its highest level ever Monday, hitting $413.23 in intraday trading even as the broader market declined.”

“A total of 62 people were hanged in Alberta over the course of 81 years until Canada placed a moratorium the death penalty in 1967. Each week until Oct. 30, 2011, Edmonton Journal writer Jana G. Pruden will tell the stories of some of those who were sentenced to death.”

Cool historical feature section of the Edmonton Journal on some stories about people who were sentenced to death in Alberta. Looking forward to reading! Historical crime is fascinating (though, usually gruesome and sick). The first one up, about Swift Runner – who was hung for murder/cannibalism, is extra interesting because of this line:

“Others said he had been possessed by the Windigo, a flesh-eating spirit that tormented him and gave him nightmares.”

“Eating an apple before you work out may boost your exercise endurance. Apples deliver an antioxidant called quercetin, which aids endurance by making oxygen more available to the lungs.”

“A dubious proposition from the outset, a rumoured fall iPad update is looking increasingly unlikely.”

Fine by me! We don’t want too much of an Apple/tech product overload…

“Another day, another cat is harassed by a common household printer.”

LOL. I really need to get on uploading videos of Thor.

TOO CUTE! The music also adds to the adorable factor.

Earth is so beautiful. 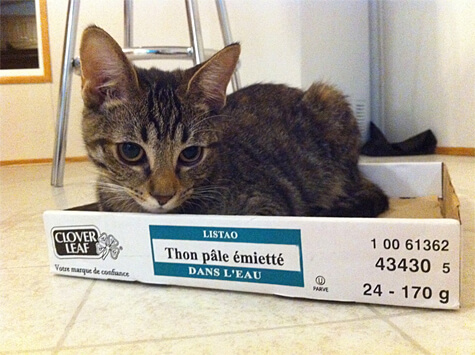 Silly Thor, get out of that Tuna box!

Linda Hoang is a Canadian blogger based in Edmonton, Alberta, who writes about travel, food, lifestyle and pet topics. She's also a seasoned social media/digital strategist with a journalism background, the founder of the Edmonton International Cat Festival and co-founder of Stop Race Based Hate, an online anti-racism education tool. Linda loves exploring the world with her partner Mike, eating their way through cities, supporting local businesses, and photographing Instagrammable Walls. Linda is a fur-mom to two cats and two dogs.
PrevPreviousClicks of the Day: September 16, 17, 18 2011 Weekend Edition!
NextClicks of the Day: September 23, 24, 25 2011 Weekend Edition!Next