“A 100-year-old man has made headlines around the world after completing a weekend marathon in Toronto and setting a world record in the process.”

“Allen who’s possibly the oldest first grader in the country says he decided to join school so that he can learn how to read and write and get a formal education.”

“In a press release this morning RIM said “as an expression of appreciation for their patience during the recent service disruptions” they will give impacted customers a selection of apps valued at $100 (USD).”

I don’t think this will help RIM.

“With nearly 210,000 people indicating that they “like” it, and many million of monthly visitors, the “alleyway” page is the most popular. Others include “Abducting, raping and violently murdering your friend as a joke”, “Pinning your mate down while someone HIV positive rapes him for a laugh”, “Police call it a restraining order, we call it playing hard to get” and “Turning into a chain smoking sexual predator when you drink”.”

“About 2,500 people watched live as an Ontario woman scooped up her newborn son from the bottom of a tub after giving birth and watched him take his first breath.”

“Apple Inc. sold more than 4 million iPhone 4S units over the weekend, making it the fastest-selling iPhone ever.”

Mike’s part of that record-breaking statistic! ;)

“Over the weekend, “Sesame Street’s” YouTube channel was compromised, with hackers going into the channel and substituting X-rated pornography for videos of Elmo, Cookie Monster and assorted celebrities singing about letters and numbers.”

“Just how good is the video camera on the iPhone 4S? If a short video from Benjamin Dowie is any indication, we’re going to chalk it up to ‘amazing.'”

Really great. The updated camera/video on Mike’s iPhone 4S is the only thing I’m really jealous of with the new phone!

“Polar bears are shrinking because of the impact of climate change on their natural habitats, along with many other animals and plants, researchers say.”

“New Zealand’s worst-ever environmental sea accident teetered on the brink of further mayhem Monday as a stricken cargo ship threatened to break apart and become dislodged from the reef it rammed earlier this month.”

This is so terrible.

This is CRAZY! I can’t believe it…

“He is not expected to be identified until next week when his family will explain why he agreed to be part of the show.”

So weird! Will you watch this doc?

“Zachary Quinto, inheritor of the iconic Mr. Spock role in JJ Abrams’ “Star Trek” reboot and the star of the upcoming film “Margin Call,” reveals that he is gay.”

Lol I don’t think anyone was surprised about this one! :) Love him!

“The grainy video of how a toddler named Yueyue ended up on the verge of death is almost too horrifying to watch, but millions of Chinese have stared at it in shock over the past few days. Many are now asking uncomfortable questions about how 18 people could ignore a badly injured little girl, and what such mass indifference says about their society.” 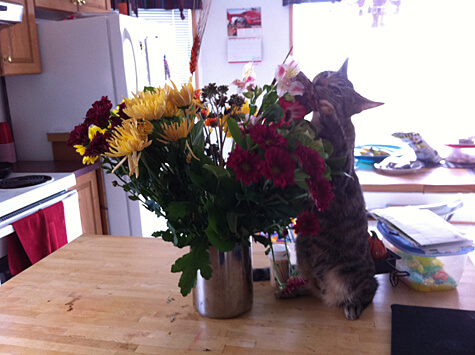 Linda Hoang is a Canadian blogger based in Edmonton, Alberta, who writes about travel, food lifestyle and pet topics. She's also a seasoned social media/digital strategist with a journalism background. Linda loves exploring the world with her husband Mike, eating their way through cities, supporting local businesses, and photographing Instagrammable Walls. She is the founder of the Edmonton International Cat Festival and a fur-mom to two cats and two dogs.
PrevPreviousClicks of the Day: Oct 14, 15, 16 2011 Weekend Edition!
Next[Recommendation]: I Love Papyrus Cards!Next