“The Glennon family’s retirement home might just look like a stack of shipping containers of all different colours from the outside. But once it’s complete, it will be a sprawling, 5,000-square-foot, four-storey building – two levels above ground, a walkout basement and another level below – with four bedrooms, five bathrooms, a games and media room, garage and workshop, and two enclosed decks.”

Crazy. Wouldn’t be my dream home but great for them!

“Andreas Gursky’s Rhine II sold for $4.3m. Here are some of the world’s other most expensive photographs”

I will say that at least the other photos (not the first one ‘Rhine II’) – are at least slightly interesting. Man, still can’t get over how Rhine II sold for so much. And I’m not the only one:

“Has the photography-art-market boom led into a creative dead end for some of these artists? It is an intriguing (and depressing) thought…”

“A new legal precedent was set yesterday with the decision by a U.S. District Court Judge that the government can, in fact, collect information about you through your internet use without a warrant.”

Lol, a “more engaged, distracted” consumer – interesting phrasing. Very true! Sometimes I like to just set aside the phone and watch something without reaching for it though – it’s a nice break. But the majority of the time I’ll be texting, tweeting, surfing the web, etc. Definitely a market to be utilized by TV producers/advertisers.

“Considering that just about everything Romenesko did at Poynter fell under an aggregational banner, it seems a stretch to call it plagiarism. Maybe “aggiarism” works better.”

This whole Jim Romenesko story has been fascinating to watch unfold. To be honest I didn’t even know who he was prior to the “case of the missing quote marks” – but now I’m aware and I’m siding with him. Seems bizarre how it all happened – but given that he had tried to resign previously to all of this, it seems like it was a long time coming. Also the idea that he was the original media ‘aggregator’ was interesting to me because it seems like everyone aggregates these days, it felt like such a common, normal thing to do. I never thought to think that there was a guy that started doing it first, lol.

“I’m that friend you have on Facebook who’s constantly posting photos of her food. I have a Facebook photo album called “Food,” almost all of my vacation albums include a significant percentage of food pictures, and even pedestrian food-related items.”

Lol. Funny this article comes out now because my co-worker brought up the other day how he feels like everyone and their grandma posts food pictures these days and he doesn’t understand it. I’m a food poster as well. can’t remember how far it dates back to but it’s just something I’ve done and love to do and obviously am not alone in doing. I imagine I’ll still be doing it when it’s not cool to do any more as well ;) Though perhaps it will always be cool to do lol. Who doesn’t love food?

“Ratner and his team developed a tricycle to capture images in places with a tighter fit. Google Street View made its biggest dump yet last week of imagery captured by Street View trikes, adding a couple hundred locations in 22 countries.”

Cool. Maybe if the apocalypse happens but somehow Google Maps/Street View survives we would at least have a really great reference to re-building. lol.

“Every child should be tested for high cholesterol between ages 9 and 11 so steps can be taken to prevent heart disease later on, a panel of doctors urged Friday in new advice that is sure to be controversial.”

This would be logical as more and more kids/teens these days are growing up obese.

Yeah but the political season lasts for a very long time so really – it is a shift in their policy, lol. At least a shift long enough to affect whatever it will affect.

“After the delay of the Canada-U.S. Keystone XL pipeline, opponents of the Northern Gateway project running from Alberta to British Columbia are preparing for a tougher battle, even as Enbridge Inc. maintains it has no plans to change tactics.”

Hope this pipeline doesn’t go through either… the damage it would bring to the coastal ecoystem/animals/etc. would be so terrible if there was a spill.

“For Terry Jones, it may be the most difficult four minutes of his illustrious career. After all, how does he cram over 40 years’ worth of sports writing into a four-minute speech? How does he thank all the people influential in helping him become one of the most prominent columnists in the country?”

Big kudos to him.

“Gove says the reform will help level the playing field between students attending public school and those enrolled in private school, where teachers often are single-subject specialists.”

Good question, would it better for students as well as for teachers? This will prompt me to ask some of my education/teacher friends and see what they think.

“Just a few months ago, the giant retailer was filing lawsuits and dropping affiliates to combat states trying to charge online sales tax. Now, Amazon is on board.”

Boo, online taxes? Well it was probably a matter of time.

“Tablet users averaged 30 percent more viewing time per session compared with desktops, according to data released this week by Ooyala, a provider of video services to major brands. Tablet users also tended to be more engaged, finishing videos at nearly twice the rate as desktop users.”

Yeah I don’t have too much of an attention span for online videos, lol.

“To compete in the $60 billion global video game marketplace, top studios have assembled NFL-roster-size teams of increasingly specialized artists to create blockbuster titles. And the growing demand for high-profile talent has led colleges and art schools to increase the course and degree options for prospective video game artists.”

“Apple surprised users this week by delivering its battery-life-fixing update to iOS 5 sooner than expected. But complaints about the problem continued.”

My battery life is getting better!!!!

“Pet insurance fraud has almost quadrupled in the space of a year, with some owners even killing their animals to get payouts.”

DISGUSTING. Ugh. People. What the heck is wrong with people.

“University of Valencia’s Mercedes Sotos Prieto, who conducted the study involving 945 men and women aged between 55 and 80 years with a high cardiovascular risk, found that fish consumption lowered the diabetes risk.”

I would be okay with this if it was raw fish, lol. The article doesn’t specify if it has to be cooked or not. Mmm, raw fish daily, yummy.

“This might seem like a bit of just deserts for all the times people have been woken up early by chirping birds, but human noise pollution is actually making it impossible for birds to mate. Humanity has crossed the line!”

“Humans want to believe that they’re the smartest creatures on the planet. But the more we understand octopuses, the more it seems that we may not be alone in our ability to solve problems, make complex connections between ideas, and survive by wits alone.”

Soooo interesting. I have always thought coming face to face to an octupus in the ocean would be one of the scariest things that could ever happen to you, lol.

“This guy just won every Halloween ever.”

This is very bad ass.

This isn’t a new video and I’ve seen it before but I don’t remember if I ever posted it. Wonderful, wonderful kitten massaging another kitten video!! hehe. <3 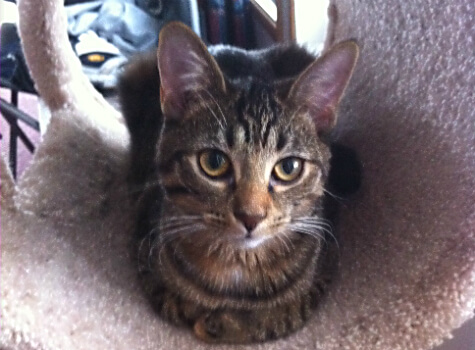 Linda Hoang is a Canadian blogger based in Edmonton, Alberta, who writes about travel, food, lifestyle and pet topics. She's also a seasoned social media/digital strategist with a journalism background, the founder of the Edmonton International Cat Festival and co-founder of Stop Race Based Hate, an online anti-racism education tool. Linda loves exploring the world with her partner Mike, eating their way through cities, supporting local businesses, and photographing Instagrammable Walls. Linda is a fur-mom to two cats and two dogs.
PrevPreviousClicks of the Day: Thursday, November 10, 2011 Edition!
NextClicks of the Day: Monday, November 14, 2011 Edition!Next