“The president of the Canadian Restaurant and Foodservices Association says the iconic flower could pose a safety concern because either the poppy itself or the pin that holds it in place could fall into the food and become a choking hazard.”

I can see the validity in it but there are alternatives (poppy stickers? Canadian flag pins? Idk. Feels like there should be something to honour our vets.

“Republican candidate Rick Perry says a major mistake in a debate won’t be the end of his presidential bid. We look at what people are saying about the blunder on social media.”

The mistake was prettttty bad. (and subsequent tweets about it are hilarious, lol)

“The 75 flights on biofuels will decrease emissions by 10 percent compared to their non-biofuel equivalent flights. That may not seem like much, but if the company is able to move all of its flights to a 20 percent biofuel blend, it would annually save the energy equivalent of powering 28,000 homes and the emissions equivalent of removing 64,000 cars from the road.”

“A Ph.D student shows his love for Apple Stores by posting photos of all 357 of them, from Bordeaux to British Columbia.”

“Although much of this happened late Wednesday, a number of papers in the region gave the story huge play on A1 today. Here’s a look at the best eleven of them.”

I find the majority of the front pages leaned towards/focused sympathy for him – and not enough focus on the fact that hello – he’s part of this horrible child rape scandal, geez. I can’t believe students rioted over it. I get that football is a huge deal but football vs. children getting sexually abused? Get your priorities straight, people.

“The results showed that Toronto had the highest percentage of negative votes, with 19 per cent. When broken down by region, the most negative reaction came from Western Canada, with 30 per cent of Albertan responders indicating they disliked Ontario’s capital.”

Lol. I have never been to Toronto.

“Ashton Kutcher, one of the most popular celebrities on Twitter, says he’s taking a break from the social network for the time being. “As of immediately I will stop tweeting until I find a way to properly manage this feed,” Kutcher wrote Wednesday night. “I feel awful about this error. Won’t happen again.””

Of course he turns the Penn State situation around so it’s about him, lol. I saw all of Ashton’s tweets + subsequent apologies and then deletions of tweets. Bad, bad moves.

A Map Of Every McDonald’s In The U.S.

“The map remains a powerful visualization of just how omnipresent the fast food chain is.”

“Cable companies said Wednesday that they will offer Internet service for $9.95 per month to homes with children that are eligible for free school lunches.”

“What initially appeared to be several chicken wings clumped together was instead revealed a a glove – balled up and covered in sauce.”

Annnnnd that’s gross. But my friend said it’s not really a big deal – someone was probably handling the chicken wings with a glove on – which is cleanly – and accidentally left it in – just a mistake, lol. Fair. But still.

“The Obama administration said Thursday it is delaying a decision on a massive oil pipeline until it can study new potential routes that would avoid environmentally sensitive areas of Nebraska. The decision probably will put off final action on the pipeline until after next year’s U.S. elections.”

This probably upsets many people but I’m glad they’re taking another look at it. If a spill happens it would just be so detrimental…

“The Edmonton public school board will press the province to abandon provincial achievement testing for Grade 3 students.”

Lol. Aw, I always excelled at my Grade 3 testing hehe.

“Residents in the foothills of the US city of Albuquerque have claimed that giant owls have moved into the area and are snacking on their small cats and dogs.”

“A Northern Alberta Institute of Technology instructor killed in a motorcycle crash near campus Wednesday evening is being remembered as a passionate teacher dedicated to his students.”

This is so sad…

“Over the course of six hours, 18-year-old high school student Ashley Billasano took to her Twitter feed to describe the nightmares she’d endured during her short life, including molestation and forced prostitution. After 144 tweets, she killed herself. No one tried to stop her.” 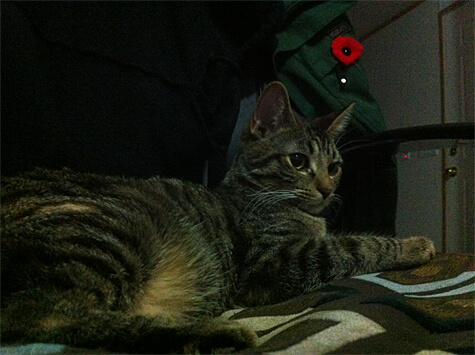 Linda Hoang is a Canadian blogger based in Edmonton, Alberta, who writes about travel, food, lifestyle and pet topics. She's also a seasoned social media/digital strategist with a journalism background, the founder of the Edmonton International Cat Festival and co-founder of Stop Race Based Hate, an online anti-racism education tool. Linda loves exploring the world with her partner Mike, eating their way through cities, supporting local businesses, and photographing Instagrammable Walls. Linda is a fur-mom to two cats and two dogs.
PrevPreviousClicks of the Day: Wednesday, November 9, 2011 Edition!
NextClicks of the Day: Nov 11, 12, 13 2011 Weekend Edition!Next