Lol, “officials say they’re confident the new notes won’t melt in the dryer or harden in the winter” – so it hasn’t been tested yet?!?!

Didn’t I say there’d likely be a hacking-related Click for many more Clicks of the Day to come? Although I’m definitely sick of hearing about the hackers. But on the other hand…

“Moderation in all things.”

Are you proud of how you’re represented online? You better be…

LOL, “wife-carrying races” – bizarre! (But that is the most bizarre of the so-called evil sports. Guess what’s number 1? lol)

So sad! The other day when Mike and I were driving in the super west end of Edmonton, we saw a bunch of new neighbourhoods being constructed and just this teeny strip of trees. I said this whole new area probably used to be all trees and it’s just so sad that we destroyed it all to make more room for our species. Humans are so evil. It is sad.

I didn’t know that was legal, but okay. She definitely doesn’t look 16 though.

Lol! Would you like some cheese with that whine?

At first I thought the announcement was ridiculous and the web would become riddled with non-consistent, unusual domains – but at $185,000 to register, it will at least limit that amount of ridiculous. Although I guess that’s just pocket change for major companies.

Interesting! Yet another service to make Google Internet-dominating.

And we wonder about the increase in obesity… lol

All companies should offer perks like those Google provides their employees! ^_^ LOL.

More sad, death-related news. I did not listen to Graham Scott, nor can I say I really knew what kind of person he was – but my Twitter feed exploded today with people talking about the very sad loss of Graham Scott and just how amazing he was. I felt sad just reading the tweets. A major loss – especially in the Edmonton media industry.

The close-up spider is freaking, freaky.

People keep predicting the demise of books but I don’t think it’s going to happen.

I am totally supportive of The Onion getting a Pulitzer! Hehe. I’ve been considering doing a “Onion Click of the Day” link for each of these posts but hadn’t gotten around to it, haha. 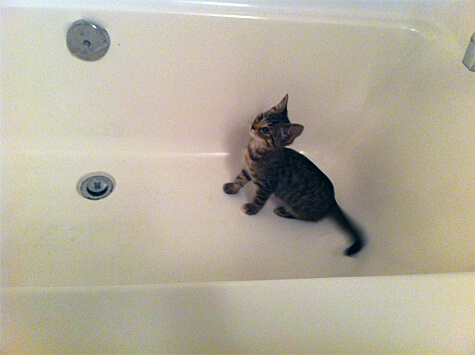 Every time we open the bathroom door Thor bolts in and jumps right into the bathtub!
LOL Random.

Linda Hoang is a Canadian blogger based in Edmonton, Alberta, who writes about travel, food lifestyle and pet topics. She's also a seasoned social media/digital strategist with a journalism background. Linda loves exploring the world with her husband Mike, eating their way through cities, supporting local businesses, and photographing Instagrammable Walls. She is the founder of the Edmonton International Cat Festival and a fur-mom to two cats and two dogs.
PrevPreviousClicks of the Day: June 17,18,19 2011 Weekend Edition!
NextClicks of the Day: Tuesday, June 21, 2011 Edition!Next