Did someone really come up with D’OH before Homer??

Interesting read! :) Wouldn’t it be odd to see a tree extend high into the clouds?

So incredible. So talented!

My dad doesn’t have time to play video games but perhaps the Wii would be his preferred console if he did, lol. Interesting stats!

Happy Father’s Day to all of fathers worldwide – especially my own! <3

I love spending time with my papa.

Disgusting… and sad that he was that desperate for alcohol..

VERY interesting! Do you have any tweets you regret? I am fine with my tweets being archived but I can’t say they’re really interesting enough to be saved forever, lol.

So inappropriate. I do not support sexting! It will come back and bite you in the butt.

What an insane mirage. So crazy!

Do prisoners eat better than students? I used to LOVE the hot meal lunches in elementary, lol – but I don’t think they were the healthiest – and I definitely didn’t always get the healthier foods in the cafeteria in high school. Add vending machines with chips and that amounts to be a #healthfoodfail

So crazy! Congratulations to him but I hope he doesn’t blow the money.

I think my passwords are pretty good…

May take awhile to fully load (and depending on the stability of your Internet/computer, the page may crash, lol) but it is good for a brief l-o-l.

A-w-e-s-o-m-e. From cakes to plushies to shoes to desktop wallpapers! My weekend work computer desktop is the yellow Angry Bird. It’s awesome. Lol.

And more. BBC is serious about getting on board with the changing industry.

More trailblazing reporting. BBC’s getting on it, this CBS reporter is getting on it (and remember that Milwaukee anchor who used his iPhone to make quick newscasts between breaks?) – love seeing/hearing/reading about the changing industry.

Lol, spraying sea water into the clouds is also another suggestion. Will be interesting to see which ideas actually take off.

So interesting!!! So much we still don’t know about the universe… outer space… “feasting” black holes!

This is so exciting I don’t know which it could be but a real wizarding school would easily be the BEST CREATIONv EVER!

Wow, most bad ass apartment – ever?

I’m still telling ya, signs of the end of the world…

Unbelievable. I think there’s going to be at least one hacking story in every Clicks of the Day for…. ever? What is going on.

I have TOTALLY been seeing more Made in Vietnam stuff lately!!!!! But, interesting read. But is it actually a good thing if it’s just being passed off to different Asian countries? :(

“Think of the lesson he is teaching his own daughter. You do not have to put up with someone hurting you. You can calmly and strongly say ‘stop,’ and I have your back.” Interesting. Though I would be so embarrassed if my parents got involved in any tiff I was having with people – fight my own battles!

I suppose it’s the ‘duh’ article of the day. Stupid parents!

I mean other than being extremely unhealthy, I have no problem with most of the foods – the fish tacos look disgusting though.

Dates of note: 1982 – first smiley emoticon ” :) ” invented! 2003: On an episode of “The Simpsons” – Homer reveals his email address, [email protected] LOL. 2004: LOL and other acronyms officially recognized in the Oxford dictionary and 2011: The Associated Press Stylebook changes “e-mail” to “email” – not sure if CP has changed it yet or not.

No energy drinks or coffee required! (I am always proud that I’m not dependant on coffee in order to survive each day).

The best thing to come out of the riots. (Lol at photos of them superimposed into other situations).

100 years is quite the milestone. I can see Apple (obviously) hitting that as well but Facebook? Twitter? I don’t know. Tough to say!

I bet mine would be my mama’s pho!

I’m certainly never a repeat customer … (unless the deal is on a business that I already frequent/go to in the first place). How about you?

Good tips! Other then my occasional random purchases I think for the most part all of my money is well spent and/or well saved!

Interesting. I have always disliked the ‘money can’t buy happiness’ statement because really – as the article says – money can buy a lot of things that contributes to your overall happiness. It totally can.

So crazy! Thank goodness it was alive and is now the happy pet of a little girl!

I think renting is a waste. of. money. I hope these Millenial predictions don’t come true!

Amazing photographs. Definitely worth a look.

I have been so surprised that Facebook hasn’t released an official iPad app yet!

Great tips! Especially for an iPhone battery-guzzler like me! :D

Could we stop trying to play God, please?

False! My dad had a drink with his dinner every night growing up – and still goes once or twice a week with his friends to drink/socialize and I could not have any less of an interest in alcohol!

:O !! No!! (Even though I’ve only ever hit that button maybe twice in my lifetime).

Wow!! Amazing designs!!! The library in Kansas City, the apartment in Israel, upside down house in Orlando, etc. Stunning!

That’s dedication! I have banked with three different companies since the age of 13 or so, lol.

Hefty amount. Would you pay that much for a dress? lol.

The world should be blanketed with free wi-fi, really! 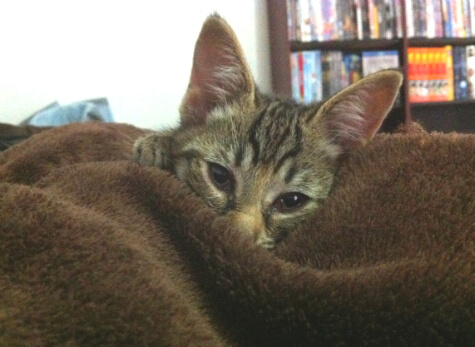 Linda Hoang is a Canadian blogger based in Edmonton, Alberta, who writes about travel, food, lifestyle and pet topics. She's also a seasoned social media/digital strategist with a journalism background, the founder of the Edmonton International Cat Festival and co-founder of Stop Race Based Hate, an online anti-racism education tool. Linda loves exploring the world with her partner Mike, eating their way through cities, supporting local businesses, and photographing Instagrammable Walls. Linda is a fur-mom to two cats and two dogs.
PrevPreviousClicks of the Day: Thursday, June 16, 2011 Edition!
NextClicks of the Day: Monday, June 20, 2011 Edition!Next