A great read in preparation for the final Harry Potter movie! :)

After a busy trip they had, I’d want some downtime too!! :)

When I first read this earlier in the day (‘Last year on Free Slurpee Day, 7-Eleven slushed out 4.5 million free Slurpees—at the same time that Slurpee sales increased 38% that day’) I was like, weird! But then Mike and I went to get free slurpees and ended up getting bigger sized slurpees that weren’t free, lol. So it makes quite a bit of sense now, haha.

Ah, the importance of search engine optimized-headlines. I suck at writing all types of headlines, lol.

I was invited to a page on Facebook to support ‘Caylee’s Law’ (I didn’t join it because I am very selective about the pages I join on Facebook, lol) – but this is an interesting read in light of that. Re: Casey Anthony trail.

I love how this review starts off with a Luna Lovegood quote. Luna is one of my favourite Harry Potter characters and Evanna Lynch who plays her in the films, was a breath of great acting air in the franchise. I’ve never found the films to be amazing (only okay acting, always leaving out great details) – but they were a great cinematic companion to the books and I’m looking forward to the final one. Huzzah!

Lol early fail. I will admit I haven’t even been using Google+ since I got it, considering I wanted so badly to get an invite, lol.

“Researchers have discovered that 15% of the devoured snails end up living through the experience, and they suspect the surviving snails take advantage of the experience to take up residence on different parts of the island that they could never hope to reach without a ride inside a bird’s gut.” How funny is that! Nice way to travel, LOL.

I think hatchbacks are not attractive at all!

“Domestic cats, officially considered an invasive species, kill at least a hundred million birds in the US every year—dwarfing the number killed by wind turbines. (See “Apocalypse Meow,” below.) They’re also responsible for at least 33 avian extinctions worldwide. A recent Smithsonian Institution study found that cats caused 79 percent of deaths of juvenile catbirds in the suburbs of Washington, DC.” lol whoops. Thor stays indoors so she’s not contributing to this environmental bird disaster at least… (but I must say she’d be an excellent huntress!)

“If prices increased 10% for soda, children’s BMIs dropped .42%. If the price of 100% juice decreases 10%, BMIs decreased .3%. The same process works for lowfat milk (.35% decrease) and dark, leafy vegetables (.28% decrease). Making those healthy foods easier to buy does wonders for a child’s weight, as their parents grativate toward them.” True enough! I hate how healthy food is always more expensive than not-as-healthy-food!

“I’m going to change my image – backward caps, the lot” – LOL, hilarious! The photo the article is accompanied by works as a rap album cover too, for sure. Haha.

This is old but on my Harry Potter clicking quest, Mike told me to check out this video. Haha! Tom Felton is hilarious!! Rupert Grint’s “mozzareller stick” is hilarious too. Haha.

All fair. I am pleased as long as Final Fantasy is on the list! ;)

Oh my god I had no idea there was such a thing as a Robo Cup! Awesome. 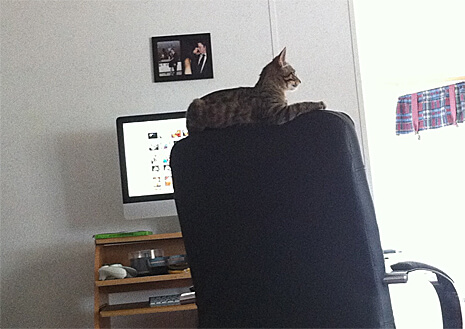 Thor – Queen of the Living Room!

Linda Hoang is a Canadian blogger based in Edmonton, Alberta, who writes about travel, food, lifestyle and pet topics. She's also a seasoned social media/digital strategist with a journalism background, the founder of the Edmonton International Cat Festival and co-founder of Stop Race Based Hate, an online anti-racism education tool. Linda loves exploring the world with her partner Mike, eating their way through cities, supporting local businesses, and photographing Instagrammable Walls. Linda is a fur-mom to two cats and two dogs.
PrevPreviousClicks of the Day: July 8,9,10 2011 Weekend Edition!
NextClicks of the Day: Tuesday, July 12, 2011 Edition!Next