“While universal health care is provided, prescribed medications are not and researchers say that as many as 26.5 per cent of Canadians without drug insurance can’t afford what their doctors are insisting they should take to stay healthy. Overall, about one in 10 Canadians who are handed a prescription by doctors have trouble filling or refilling doses, while some strategically skip doses.”

“A Canadian navy intelligence officer has been charged with communicating information to a foreign entity in a case the RCMP commissioner says is an indication that Canada is not immune to threats of espionage.”

It’s like out of a movie or something! :o

“Canadian taxpayers are spending $2.4 billion on providing bilingual services each year… The numbers suggest each Canadian pays $85 to ensure the country’s language laws are upheld.”

“How much stuff is enough stuff? At what point should we worry a bit less about getting and spending and devote more time and energy to other things? As government austerity measures, shrinking incomes, and postholiday bills make us feel the squeeze on our wallets, it’s an especially good time to ask questions like these.”

I know we could be happy with less but what would actually make everyone happier is not being in debt!

“An editorial in the Canadian Medical Association Journal is calling for doctors performing prenatal ultrasounds to conceal the sex of the baby for the first 30 weeks, to curb a trend toward “female feticide” in the Asian community.”

Crazy… makes sense though. But that is sad. Idiot parents committing female feticide.

“An ambitious plan to explore a vast lake trapped beneath the Antarctic ice is a step closer to becoming reality.”

Cool… but I would hate to think what lurks (and will be unleashed) down there!

“As part of the state-mandated termination of its ethnic studies program, the Tucson Unified School District released an initial list of books to be banned from its schools today… Facing a multimillion-dollar penalty in state funds, the governing board of Tucson’s largest school district officially ended the 13-year-old program on Tuesday in an attempt to come into compliance with the controversial state ban on the teaching of ethnic studies.”

“Facebook is hosting an app that lets you deliver your last words from beyond the grave. The third-party app called “If I die” lets users record a video or text message that will only be published in the event of your death. Once you install the app you must select three “trustees” from your Facebook friends list to confirm you have in fact died.”

Well. That’s interesting. (and again the “there’s an app for that” phrase comes into mind).

“Reports out of Washington say the bill (SOPA) has been put on hold indefinitely, until some kind of “consensus” can be reached. Is this a victory? Not quite. Government watchers say this move could be just a delaying tactic, and note that an equally unfavorable bill called PIPA is going ahead in the Senate. As a result, many of those planning to stage web “blackouts” in protest of the legislation are continuing with their efforts, including Wikipedia.”

Stop trying to control our Internet.

“Recently a writer with The Vancouver Sun wrote a story about an 82 year old motorist in Cranbrook who was alleging she was treated unfairly by the RCMP with respect to being stopped for suspected impaired driving and refusing to provide a breath sample. Some other media outlets picked up this story. Unfortunately, the writer did not ask for comment from the RCMP, or check any facts beyond speaking to the motorist. Had we had a chance to respond, we would have been able to share facts that we believe the public deserve to know.”

“Starting next Monday, January 23, Tim Hortons will be rolling out a new extra-large coffee size across the country… At 24 ounces of coffee, or 710 millilitres, the cup will be bigger than a standard-sized individual plastic bottle of pop and outweigh Starbucks’ largest size for hot drinks, venti (20 ounces).”

“What’s happening inside his throat to form those sounds? ‘It’s fascinating and captivating and gross.'”

“As unbelievable as it sounds, a bill that would have effectively redefined pi as 3.2 came up before the Indiana legislature in 1897.”

“Japan Airlines unveiled a Hello Kitty-themed ‘Hellosmile’ Boeing 777-300 at Tokyo Haneda Airport on Friday, Jan. 13… The jet is scheduled to fly to such major domestic destinations as Sapporo, Osaka, Fukuoka and Okinawa for a year, starting Friday.”

Lol. Why am I not surprised? 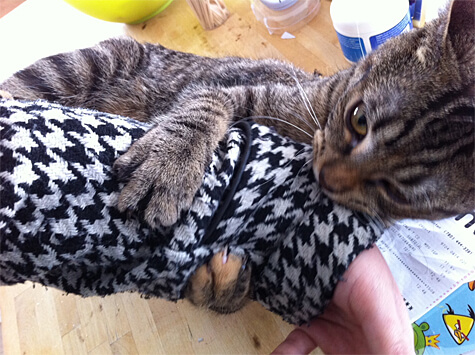 Thor can be quite the evil cat.

Linda Hoang is a Canadian blogger based in Edmonton, Alberta, who writes about travel, food, lifestyle and pet topics. She's also a seasoned social media/digital strategist with a journalism background, the founder of the Edmonton International Cat Festival and co-founder of Stop Race Based Hate, an online anti-racism education tool. Linda loves exploring the world with her partner Mike, eating their way through cities, supporting local businesses, and photographing Instagrammable Walls. Linda is a fur-mom to two cats and two dogs.
PrevPreviousClicks of the Day: Jan. 13, 14, 15 2012 Weekend Edition!
NextClicks of the Day: Tuesday, January 17, 2012 Edition!Next